As we wind down our stay in Laprade, and because the weather is damp, we are just visiting a few new small villages today with quick dash-from-the-car geocaches at interesting places; no grotty dead end, under bridge hangout spots for lowlife. The first geocache was at a very old Romanesque church and cemetery; we both liked the church, me the door and lock, him the truck memorials. 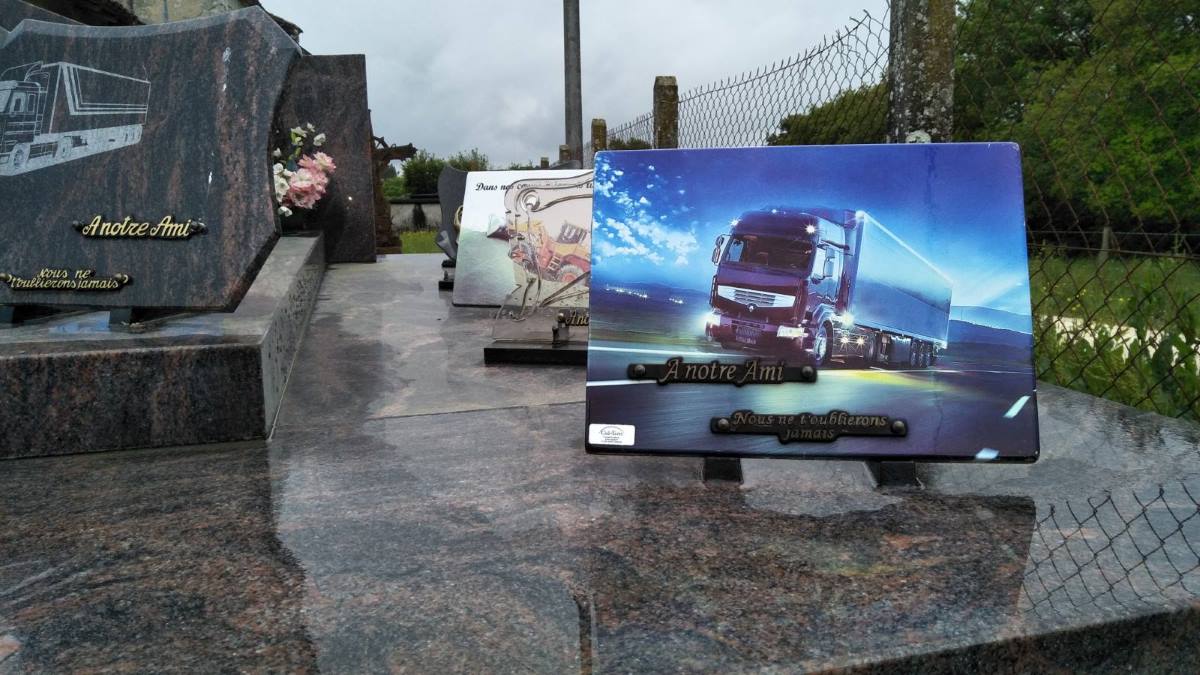 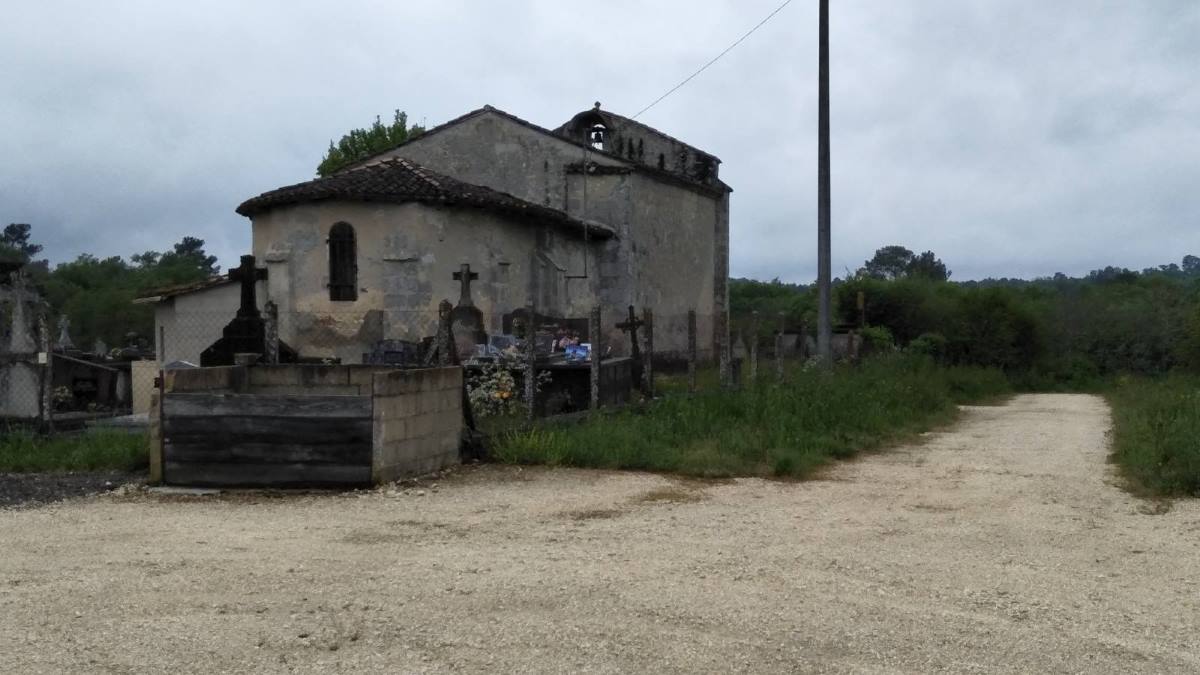 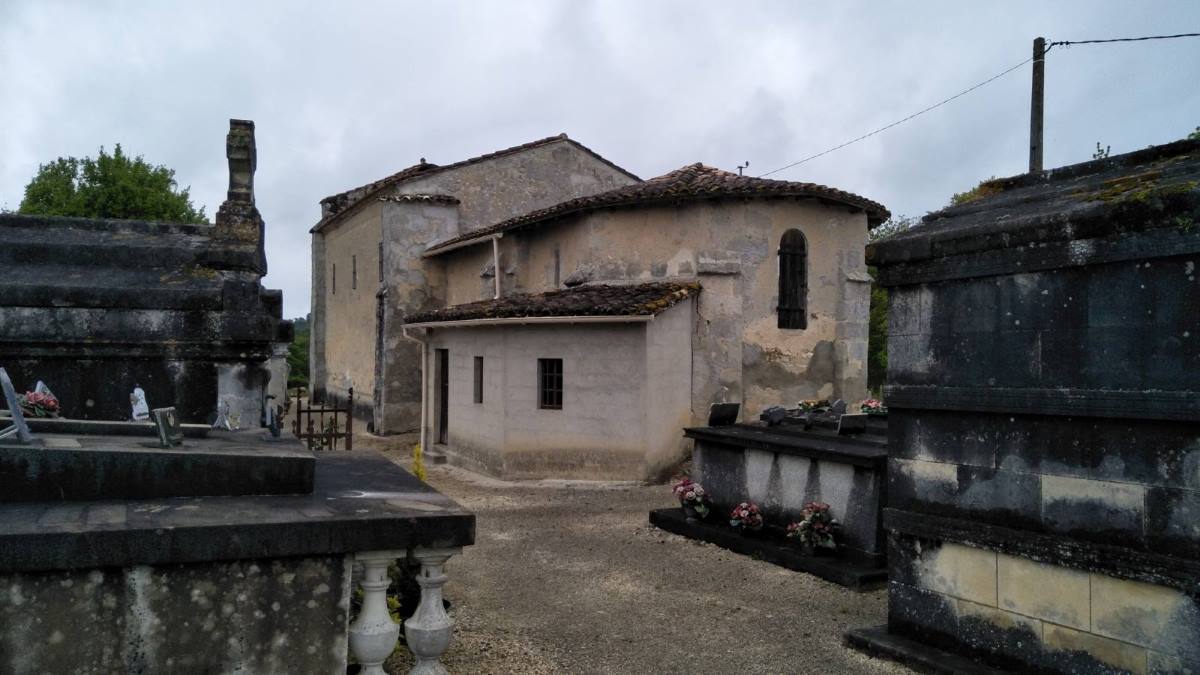 The second was at the Dolmens (stacked stones) in a vineyard; apparently the stones were stacked 4500 years ago and could have been a burial site, covered with earth, with the entrance facing the sun. 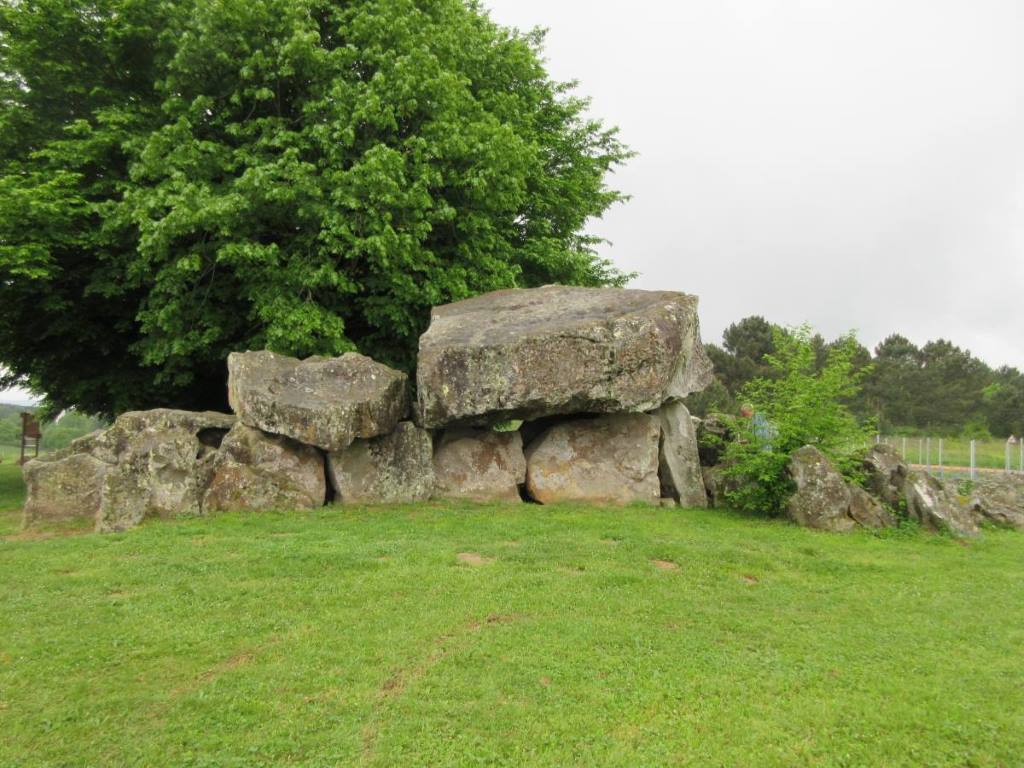 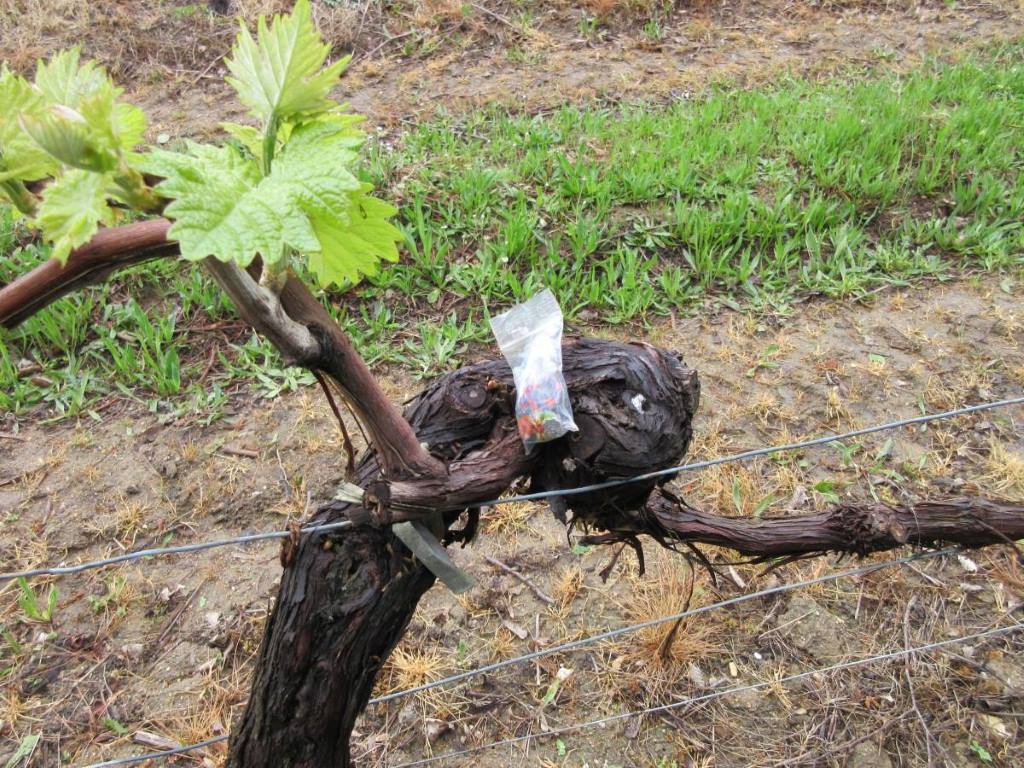 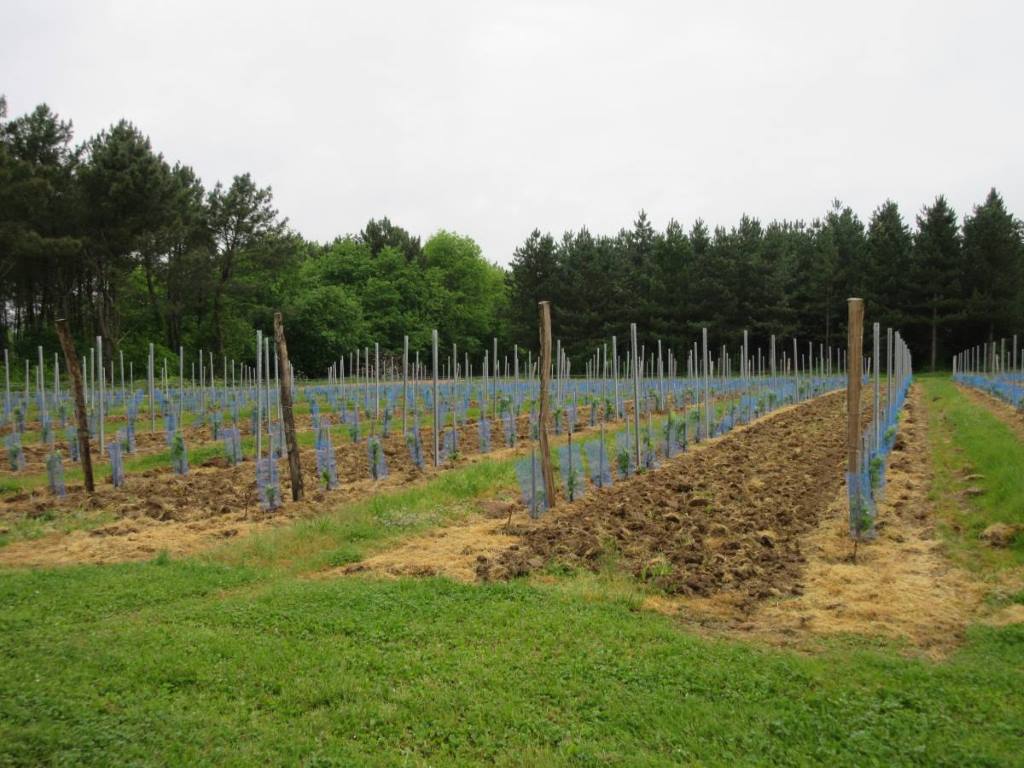 The third was at the ancient washhouse of Montguyan. Considering its position down a back alley and its refurbished surfaces, the town has obviously decided to do it up. Unfortunately every dog in town uses it as a toilet. Not unusual in France; sadly, that’s life.

The fourth cache was suppose to be at the Montguyan castle. Unfortunately it turned out to be one of those hunt-in-the-long-grass ones with the signs and smell of piss and crap everywhere. However somebody had weed-wacked the area and, I imagine, the cache with it, shame they didn’t take the dog shit. Note the glass and aluminium windows and doors in the old castle – no, it’s not a house restoration project but somebody trying to protect the castle as they restore it. 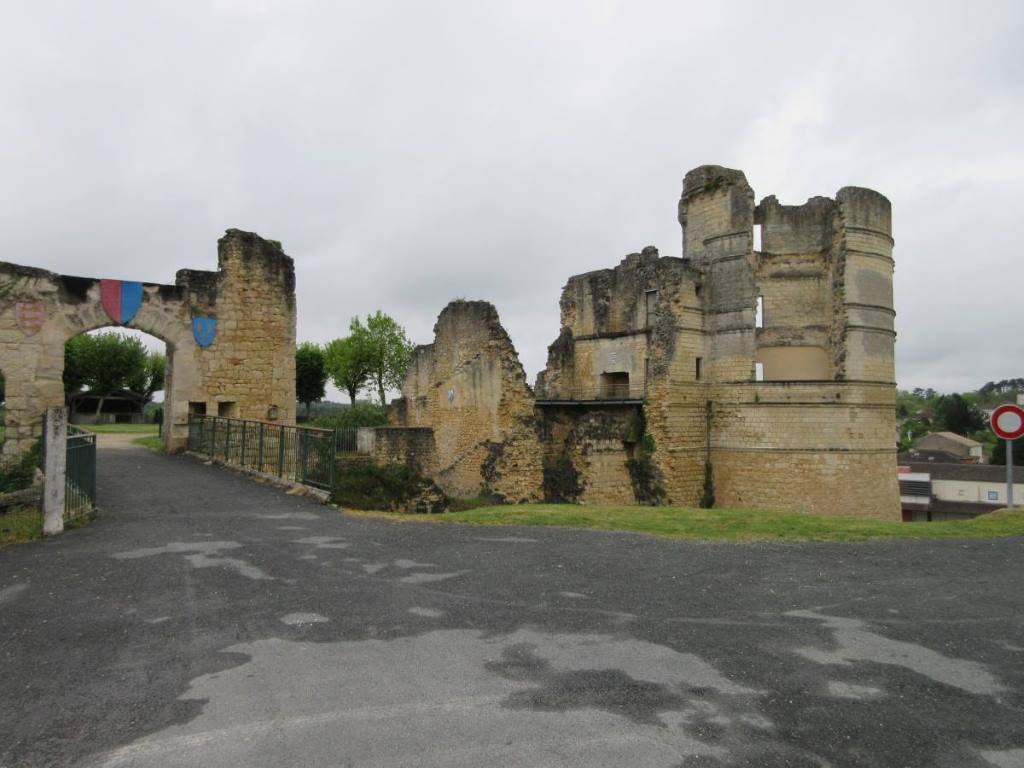 No more caches today but instead my rant about French weekend drivers. Normally we go down narrow country lanes with no centreline and encounter locals (in little cars) speeding towards us with both cars normally moving to their respective grass verges to pass. However on Sunday the aggressive French and the English (who come over for the weekend) turn out in their bigger Jaguars, BMWs and Mercedes. They slow for nobody, don’t move over and even attempt to get in the car park you are trying to vacate even before you are half out. We went to two markets today, our local at Aubeterre and one at the lovely village of Bonnes (found by chance). Both times we faced impatient bargain hunters who couldn’t wait five seconds for us to park the car. Even worse are the English tourists who stroll across the road without using pedestrian crossings and expect you to stop; they think they own France. Don’t even get me started on dogs at the market, being taken into buildings and allowed to examine the goods on the stall tables. Sadly I didn’t buy any salt and peppers, but I was almost in the market for a gold cross and some rosary beads for forgiveness of my condemnation and near persecution of the Poms.

Today’s French word and taste of France is Chipo Superieures et merguez veritable. Because meat is so expensive I resorted to sausages for tea and the name of the packet looked flash. It translates to real superior and spicy red chipolatas. A photo would destroy any image you could conjure up of a real superior sausage, so best left unpublished.