Saint Cere is 70 minutes drive away from our home and offers tourists the normal sights of medieval houses, old market halls and chateaus. However I thought this place was worth a visit because it calls itself “little Venice” and houses an art exhibition in the chateau. The artist was Jean Lurcat and his wife, whose lithograph style of painting and pottery designs were very similar to Roger’s godmother. First stop the Tourism Office to get the all important ‘walk around’ map, so that we don’t miss any of the sights of relevance. With an outside temperature of 34 deg the Tourism Office was a welcome respite from the heat. However we must have forgotten one of our half dozen greetings because they lady only wanted to sell us a guided tour or a guide pamphlet, both in French. After our persistence we managed to get the free map which was well hidden from the tight non French speaking tourists. She reluctantly told us the relevant sights and how the chateau was an easy 200m walk away.

The Tourism lady won, as we foolishly believed her how easy the walk was. It was a steep uphill climb, in extreme heat, over an uneven path dotted with cow pats. When we got to the top the lady in the chateau felt so sorry for us she gave us cold water and then in French (she only knows some English; NZ, rugby, All Blacks) told us the place was shutting for lunch but we could wait in the gardens for 2 hours until they reopen. We stayed in the gardens admiring them and the view for 30 minutes until we recovered and then made the trek back down for lunch. 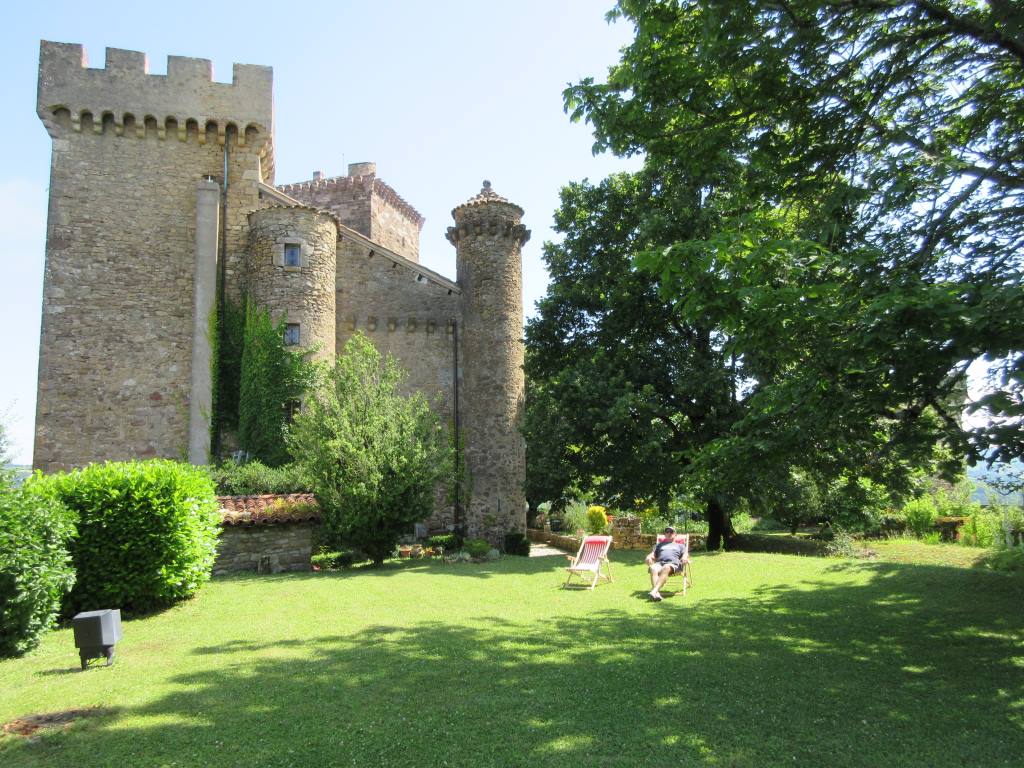 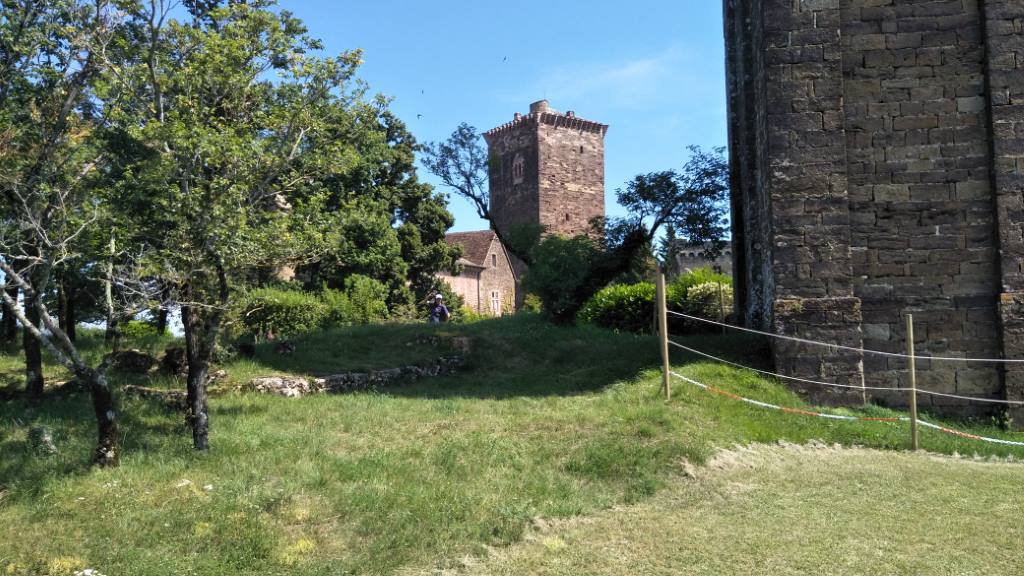 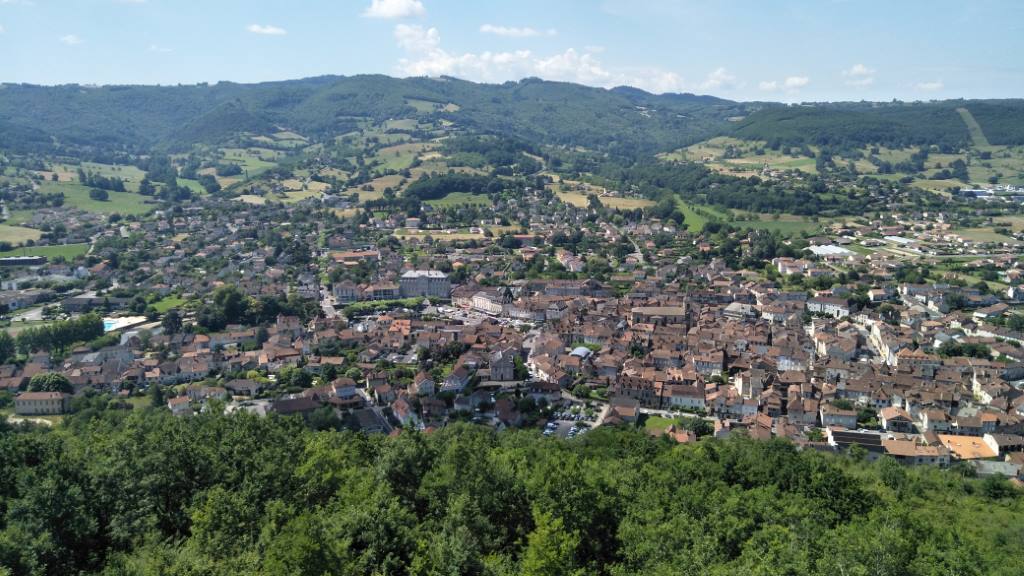 Although we had brought most of our lunch with us, we went to the bakery to get the bread, some extra cold drinks and a treat for the walk. Today’s taste of France enjoyed by the little Venice Canal (with the North Shore Tyred Swans) was a Baba, not being a fan of rum; it was a little too much for me. 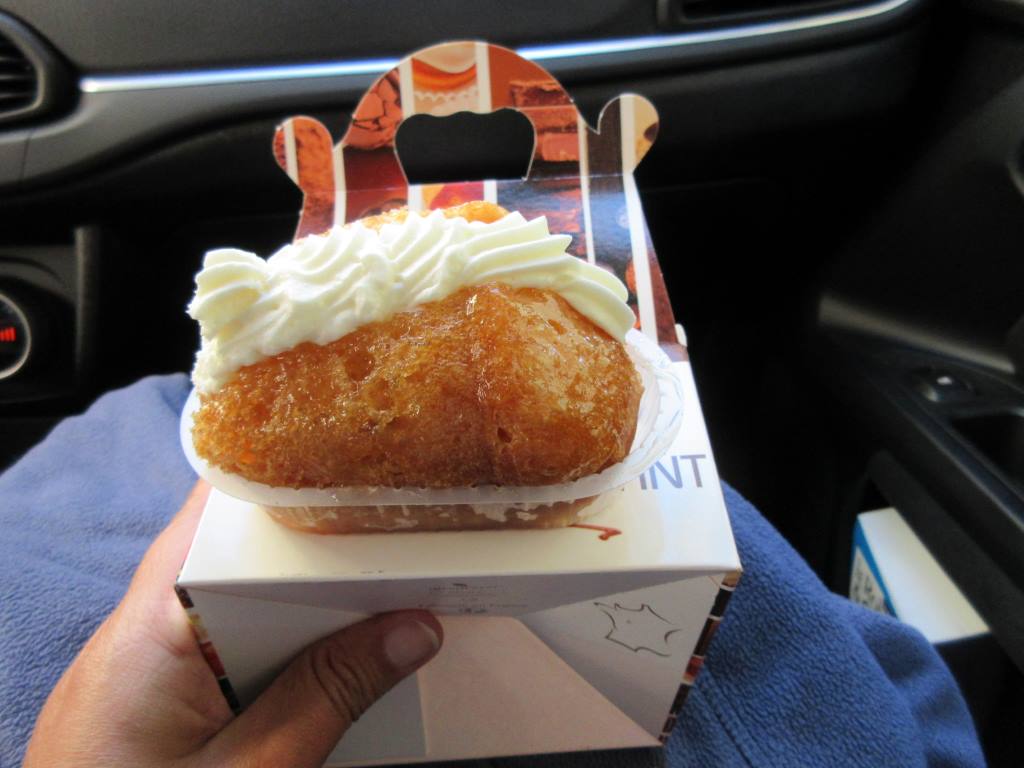 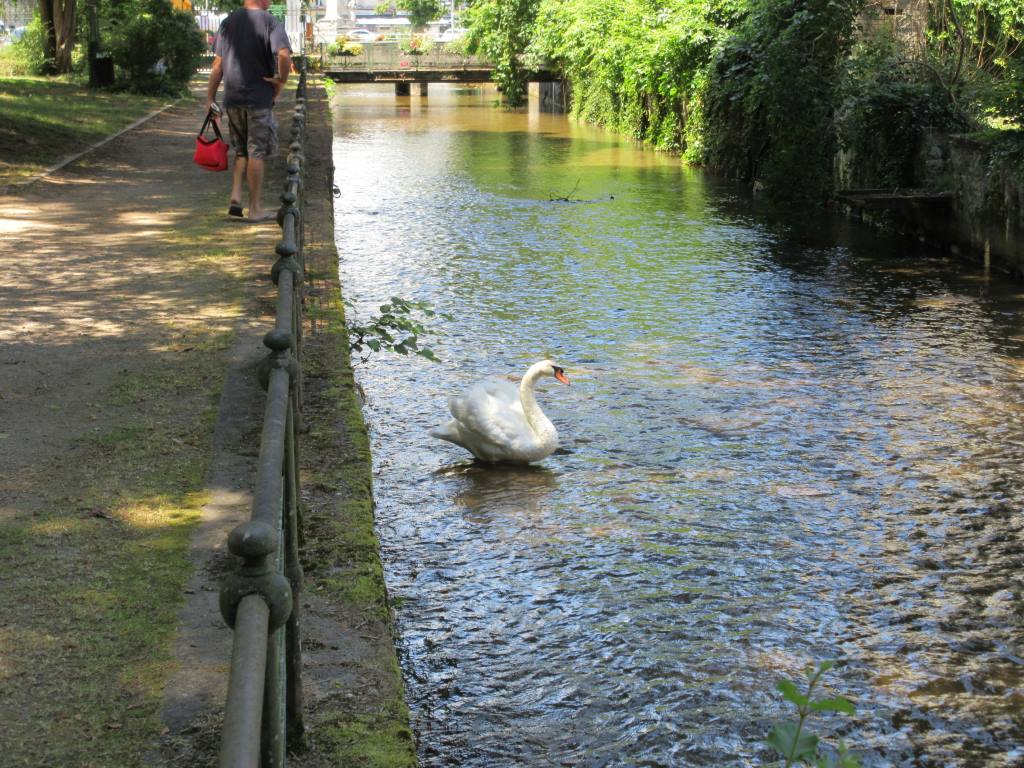 We went on our walking tour to see more half timber and turreted houses and to do a few geocaches. Then we were greeted by a Kiwi couple who were pleased to see our NZ t-shirts. They had not long been in France and will be in Europe for 3 months. They were struggling to cope because they had no GPS, no French, no plans and no accommodation booked; best of luck to them, especially as they will have 3 months of 30+ degree unbearable heat every day. 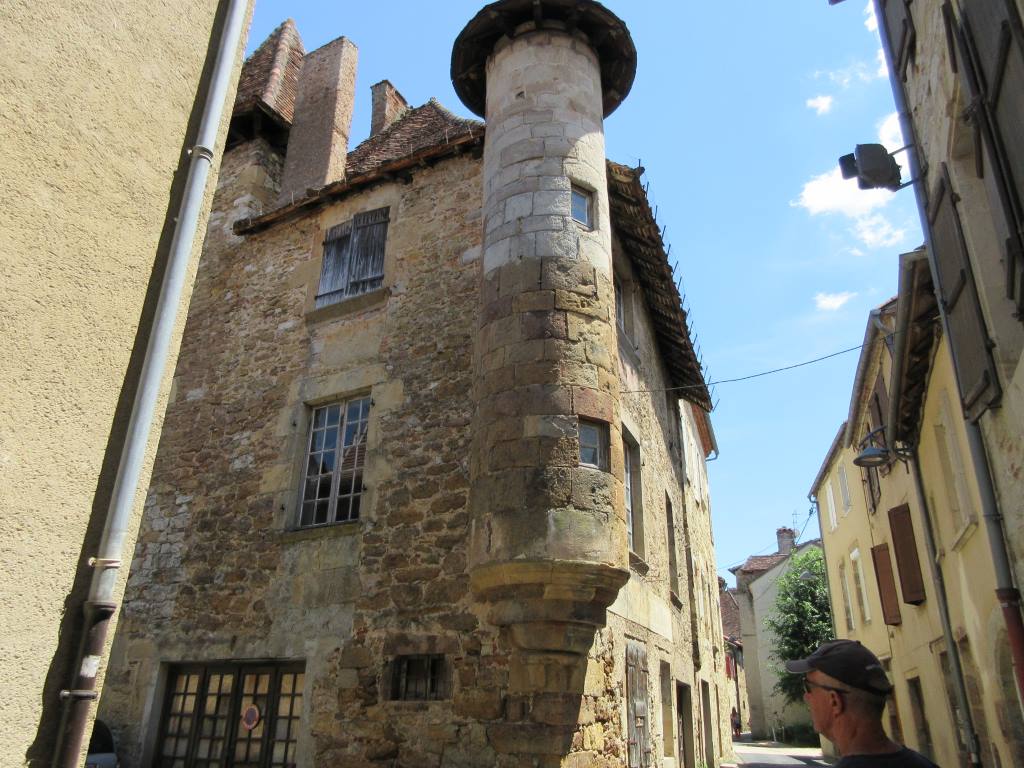 We went back to the chateau, by car this time, and viewed the chateau and art exhibition. Again the lady was apologetic for us having to walk in the heat. Her assistant in the art gallery spoke English and was able to tell us how they turned Jean Lurcat’s paintings into tapestries. Apparently he draws them in mirror image, only colours some and writes numbers in other fields, and then they go off to the people who make tapestries. From the Chateau the artist also carried out his ‘Allo Allo’ exercise of operating a secret radio for the French Resistance during WWII. 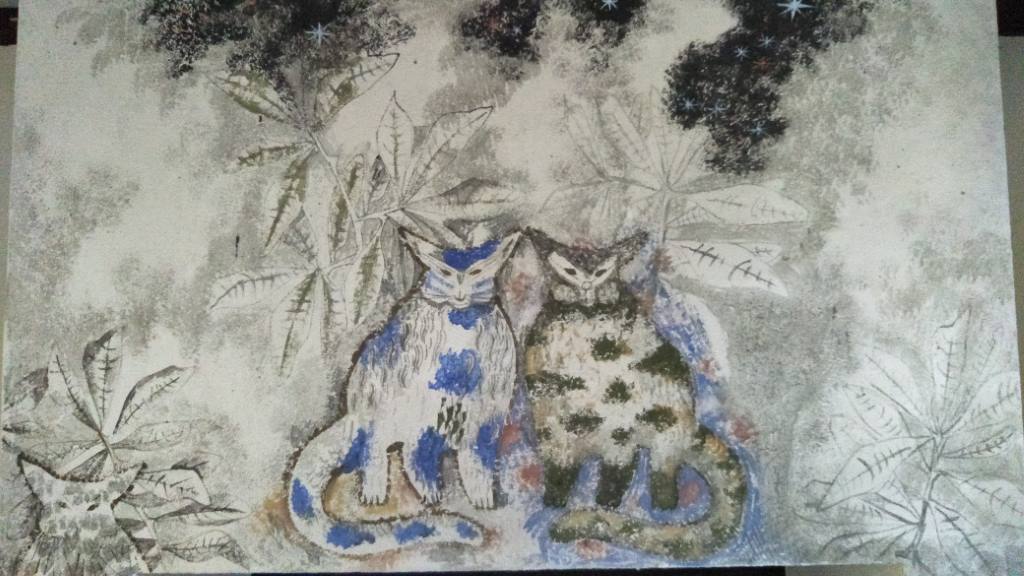 At the art exhibition we went in the out-door because the in-door said depart your visit here.French word of the day is ‘depart’, to me it means leave for example you depart the country or the building. However in France when a sign on a museum says ‘depart’ it means start. This makes sense because when you leave the country you start your overseas trip.

Last thing before going home were geocaches at the Chateau Montal and the very small towns of St Jean Lespinasse and St Medard de Presque. 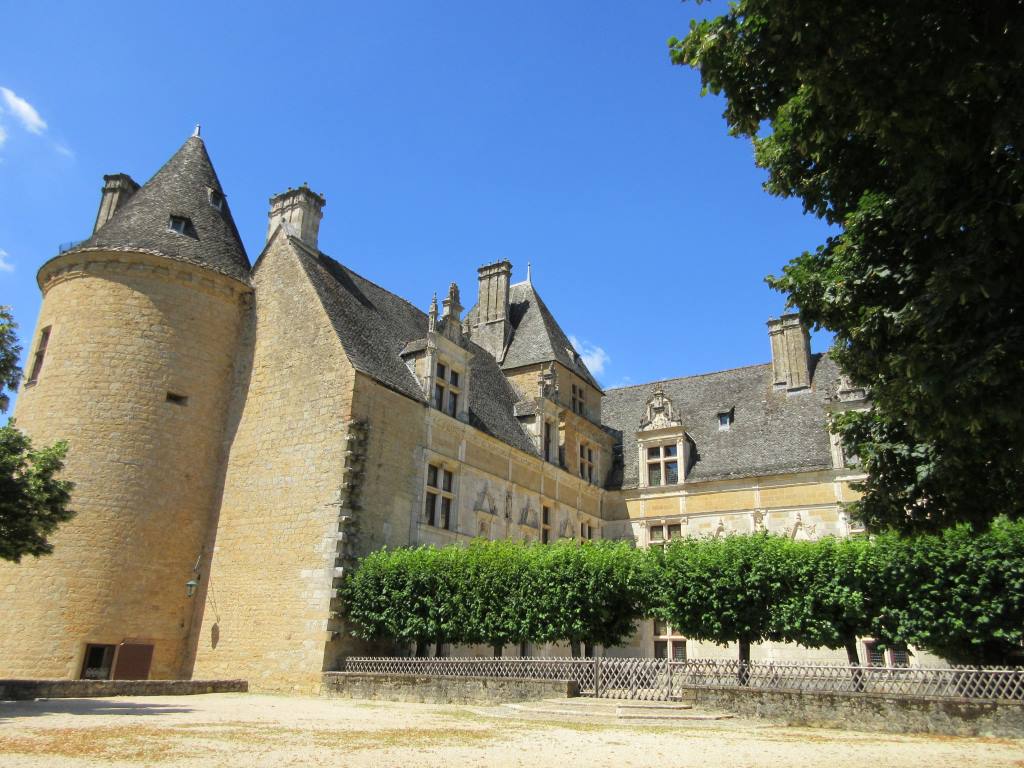 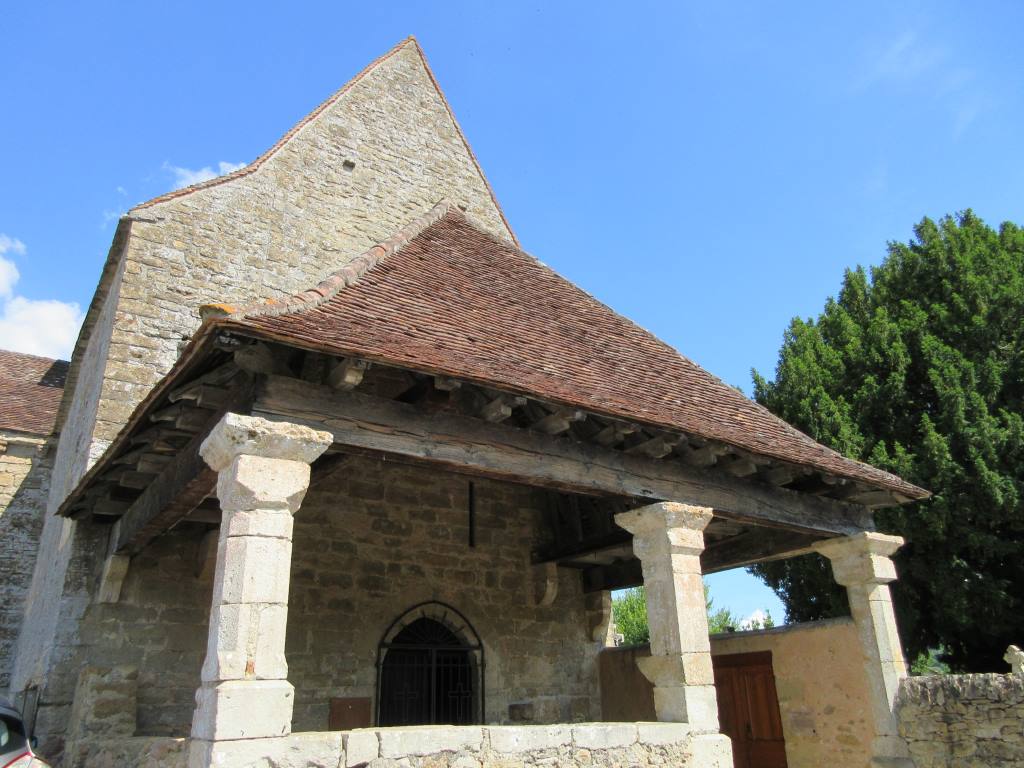 If we thought we were going to come home and rest we were wrong. This weekend is festival time in Cahors, which starts on Thursday night, coincidently so did France’s celebrations of winning another Soccer World Cup match. The lovely town of Cahors is allowing all of its bars and restaurants to stay open until 2.00am. To draw the punters in they have put on free live musical entertainment, advertised as more than eighteen bands. So off we went for some Cultural Immersion, into the hot night - actually it is daylight, even at 10.00pm. The music varied from DJs, youth bands, line-dancing, choristers, solo artists, classic rock bands, African drummers, soul music, heavy metal etc.
Best dressed: two old guys in steam punk gear singing ‘see you later alligator’ in French
Best music: three young kids doing Beetles and other classics a là heavy metal
Best entertainment: the music school that played on the steps of the court house. They rotated the singer and some band members every song. While the audience focused on the solo performer the sax player and keyboardist disappeared into the bushes. Some people found it so hot they sat in the fish ponds.
Worse performance: the Boy George impersonator and the line dancers.
Nearly made the grade performance: goes to the two bands of middle aged men and older who sung classics from Police, Pink Floyd etc in English. Their music was great, their pronunciation of English words terrible.

Midnight we called it quits, you had to be there to sense the atmosphere and see how many locals came out to support the musicians and the restaurants. No drunk people, no fights, plenty of food stalls and extra beer tents serving €2 beers. 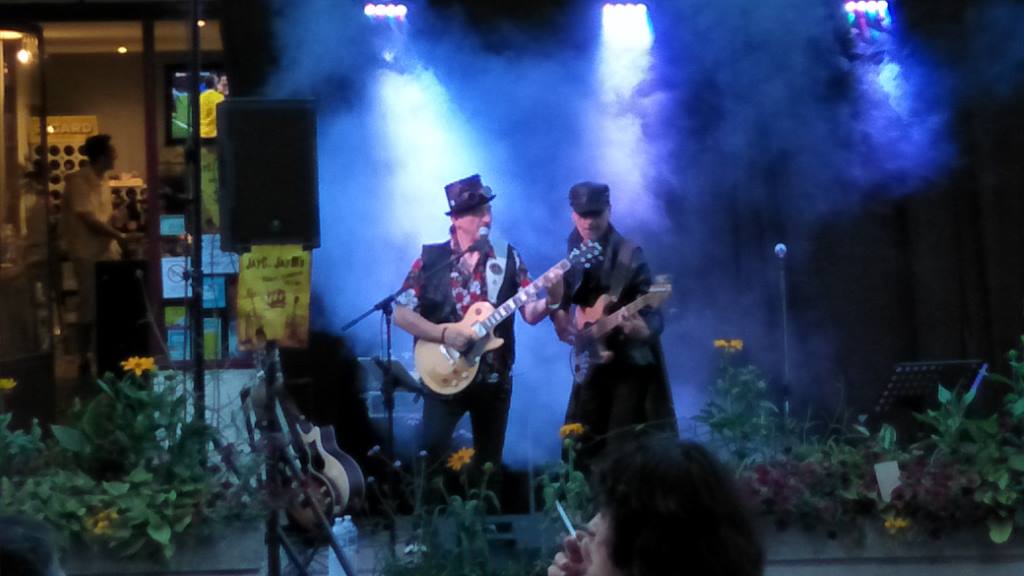 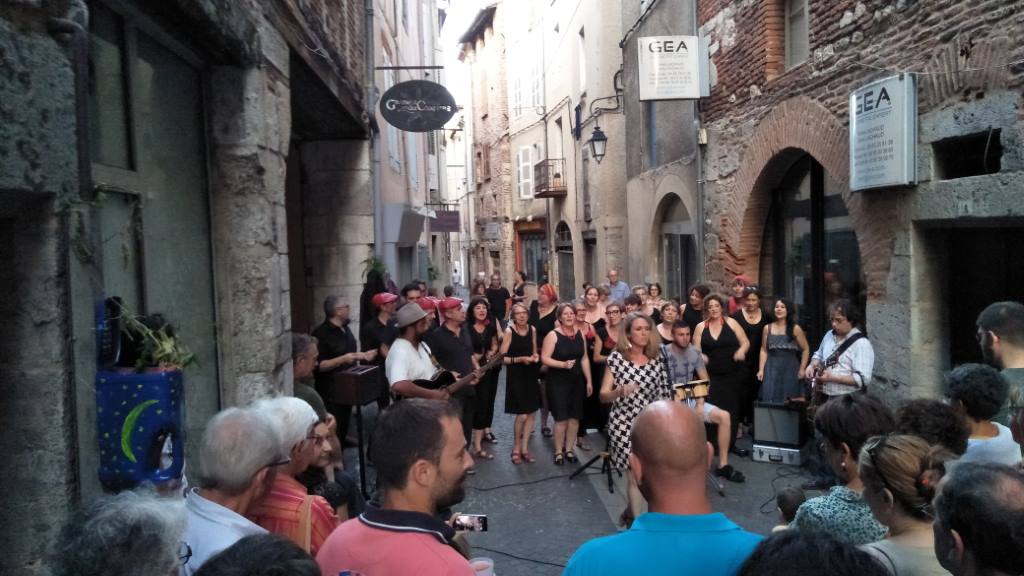 A few of the bands played in front of buildings and monuments carrying the name Clement Marot, who was a Cahors born Poet. Therefore today’s Cahors secret garden is No. 10 the Clement Morat fountain (not working) and small garden. 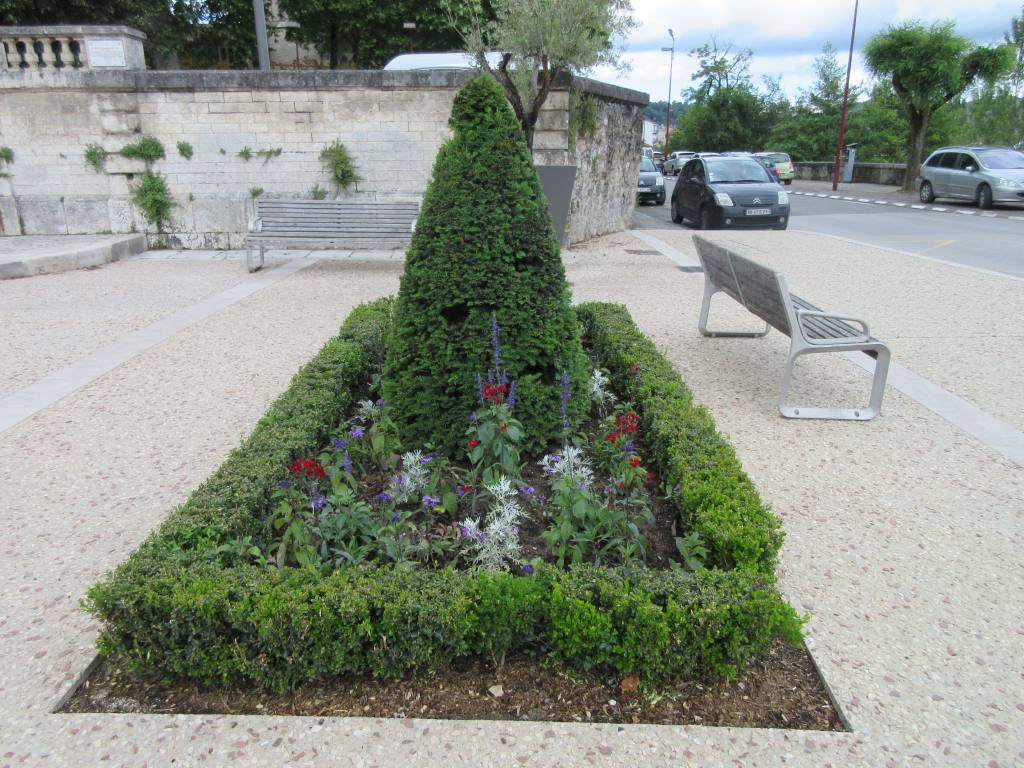