Today’s aim was to go to Moissac to see the Abbey, Cloisters and another canal aqueduct via geocaches. However geocaching doesn’t always go as planned, so instead we saw an aqueduct, a virgin and a garden.

First stop was Montcuq for fuel, a whole ten minutes entertainment in itself. Fuel comes from Total petrol stations, at a price, or for a better deal from supermarket petrol stations. However if they don’t have a cashier for cash payment or you don’t have the right credit card you can be a long time looking for somewhere to buy fuel. We queued at Montcuq and just as we pulled up at the pump road rage started behind us as a lady pushed in front of a guy. There was a long and loud screaming match and meanwhile the guy hopped into another queue and got his fuel, while the lady sat behind the Kiwis deciphering the French instructions, karma! The whole ordeal was so dramatic we had to pull over and get a chocolate fix = taste of France: Blueberries covered in dark chocolate or French word of the day ‘myrtilles’. 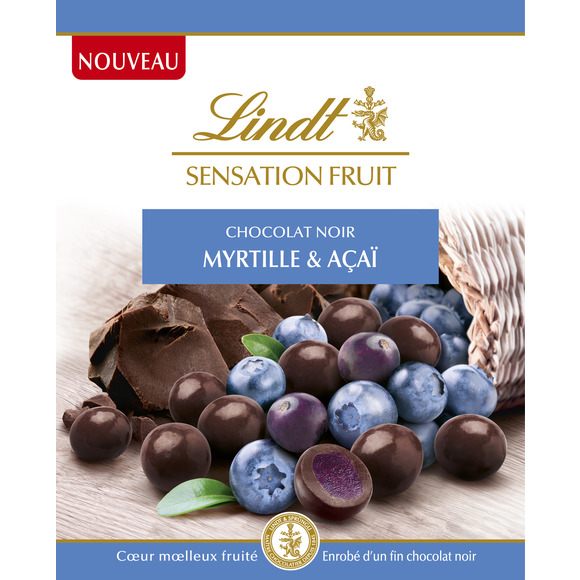 Second stop was Lauzerte for some lunch supplies, or not if you always arrive ten minutes too late. Their weekly farmers market had just packed up as we got there and the bakery had also shut. So making do with a bun we walked around the town because it had some interesting history and lovely medieval buildings with pilgrim gardens. Standard bastide history, English took it off the French, Protestants took it off the Catholics, Pilgrims came (and still do), Crusaders came, each and everyone left their mark. However the town has moved on from its past of destructive conflicts and has really done itself up for the pilgrim market. 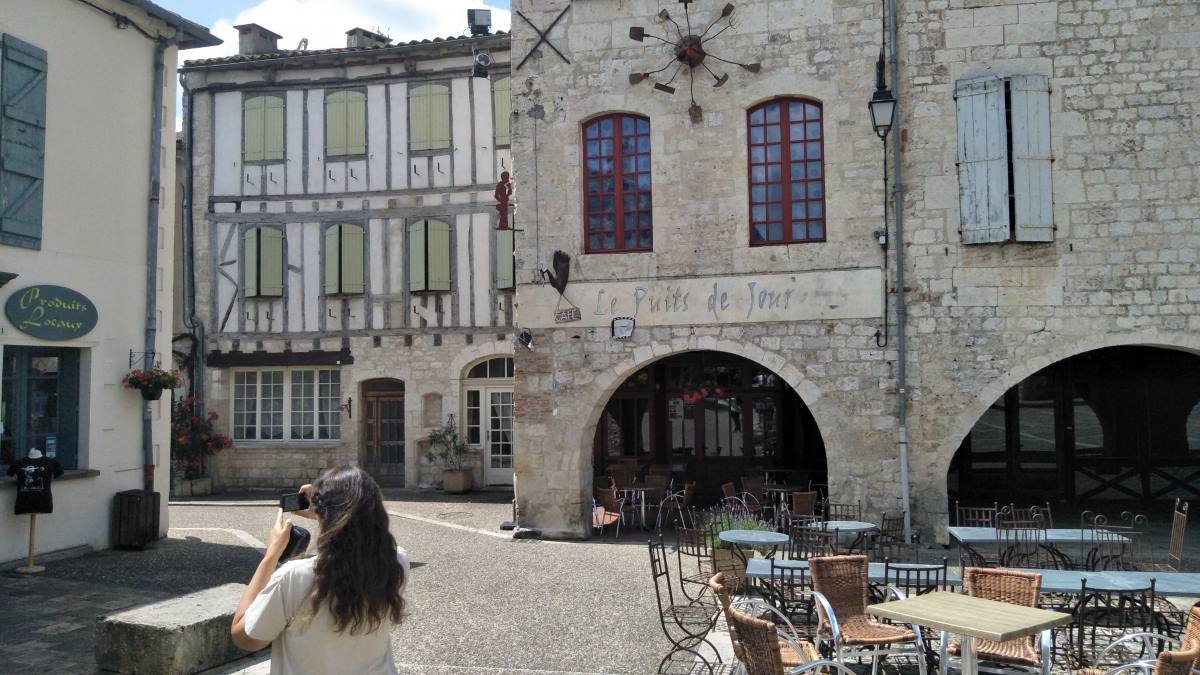 We got to Moissac via our canal aqueduct cache, however I didn’t do enough research on canal bridges before leaving home and therefore we didn’t find the cache, but I did find the Rosa and a snake (the perils of caching in France). The Rosa is Rick Stein’s French Odyssey series boat; today’s customers were Australia, paying NZ$7000 for a six-night gastronomy tour on the canal. I watched the chef making pies while they were navigating the lock before going over the aqueduct. I’m dying for a pie but I’m not paying that much for one. Sorry no pictures of the snake, Roger bravely threw a stick at it before I even thought about a photo. 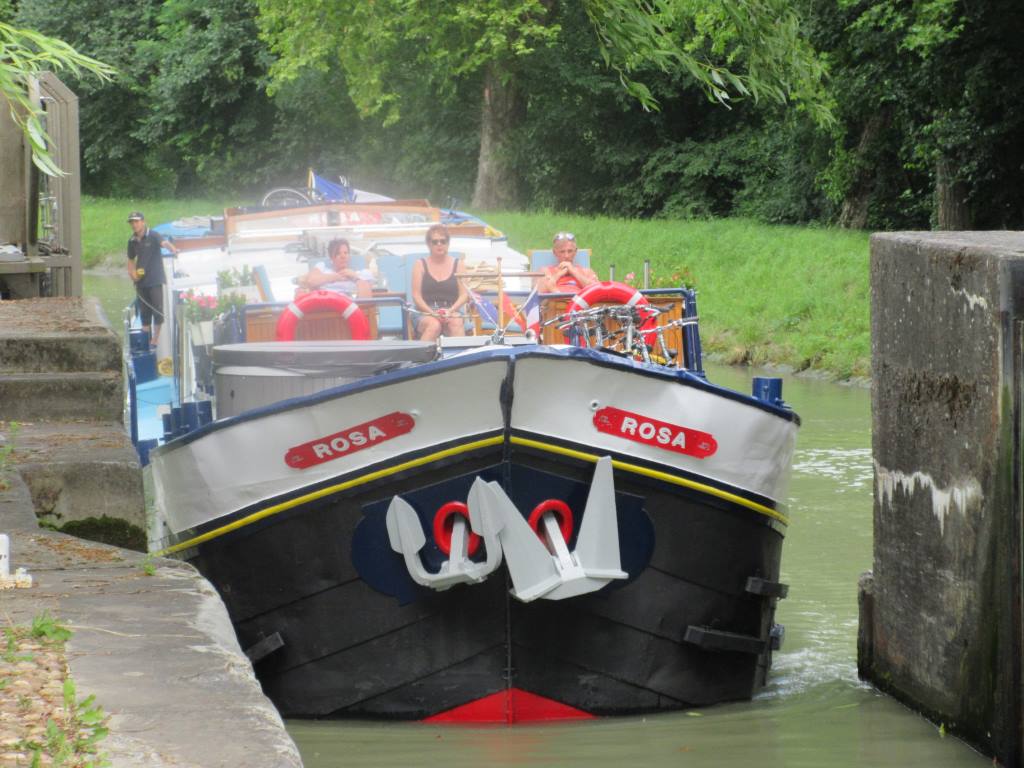 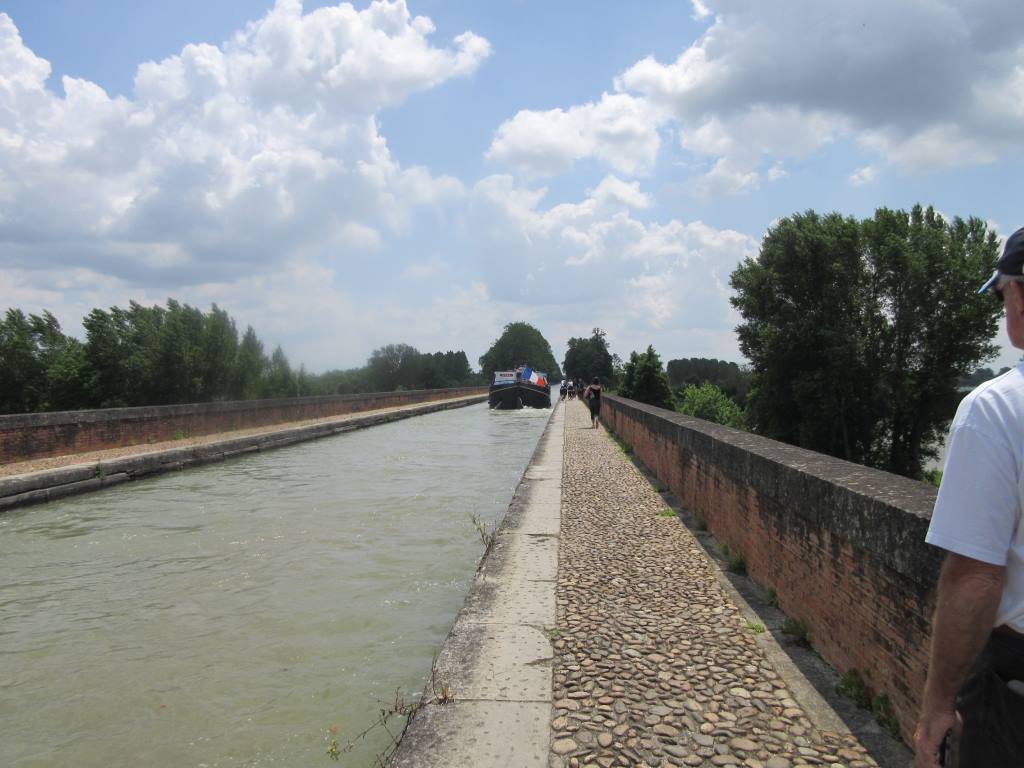 The next stop was supposed to be at the Moissac Abbey and Cloisters, however I couldn’t bring myself to part with the costly entrance fee when elsewhere visits are free. So we did the cache in the pilgrim’s gardens at no charge. 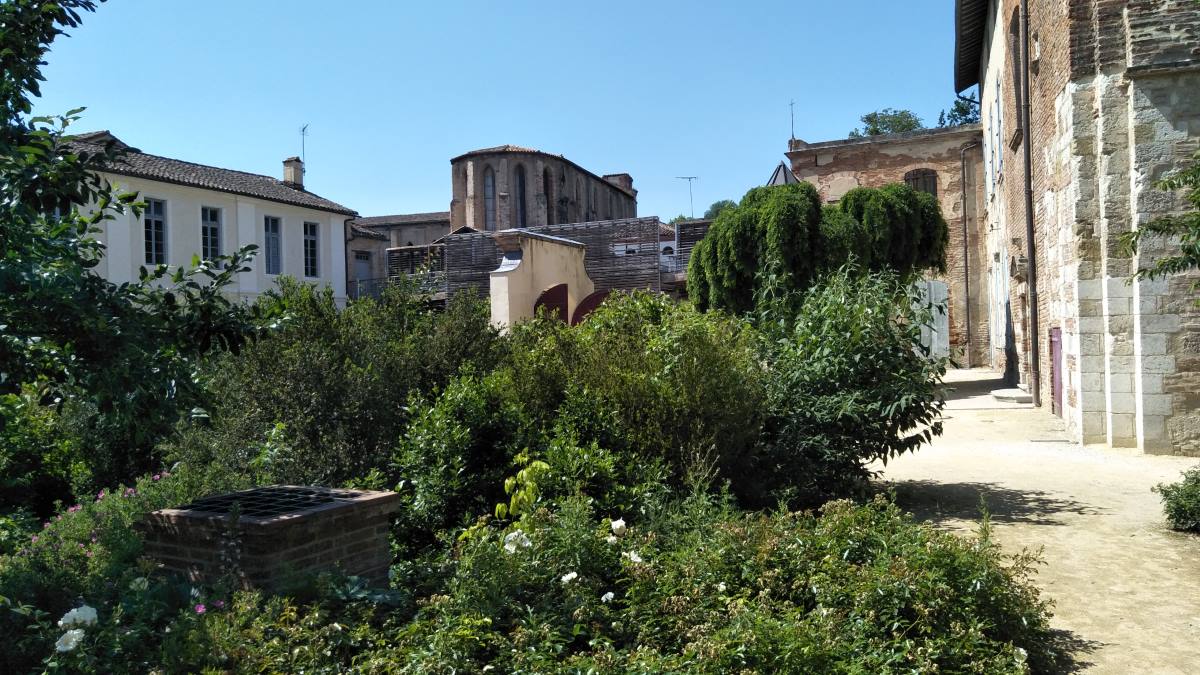 Our last cache was the Viewpoint of the Virgin overlooking the city. Nice view, something not seen in Hamilton, neither virgin nor view of the city. 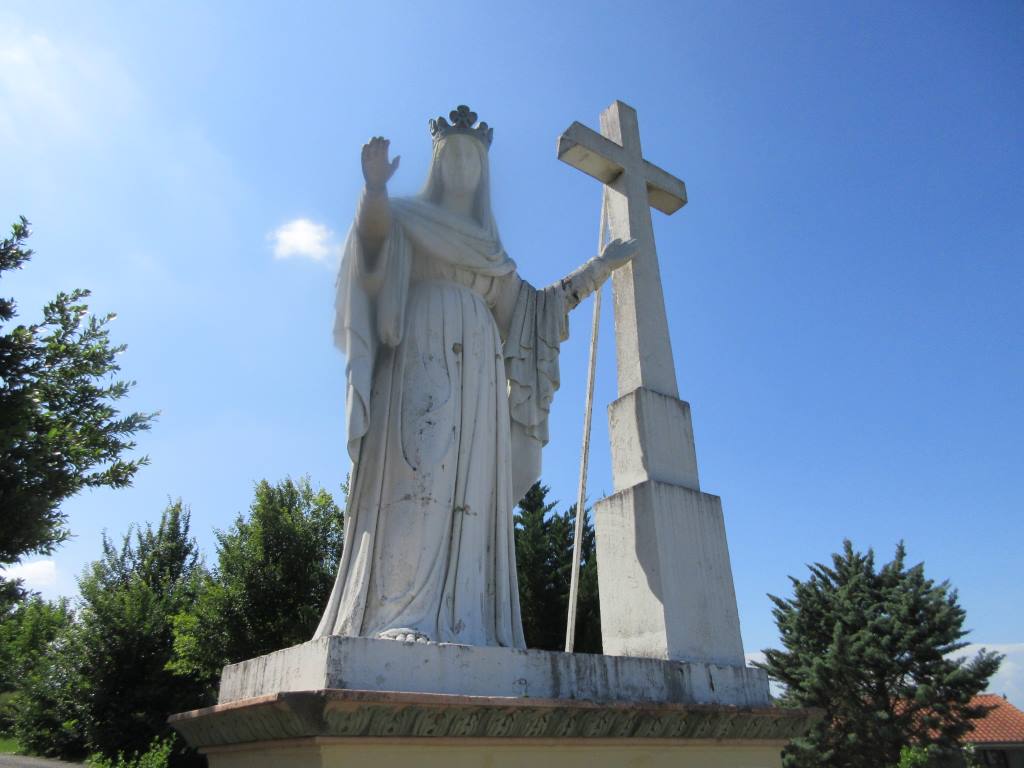 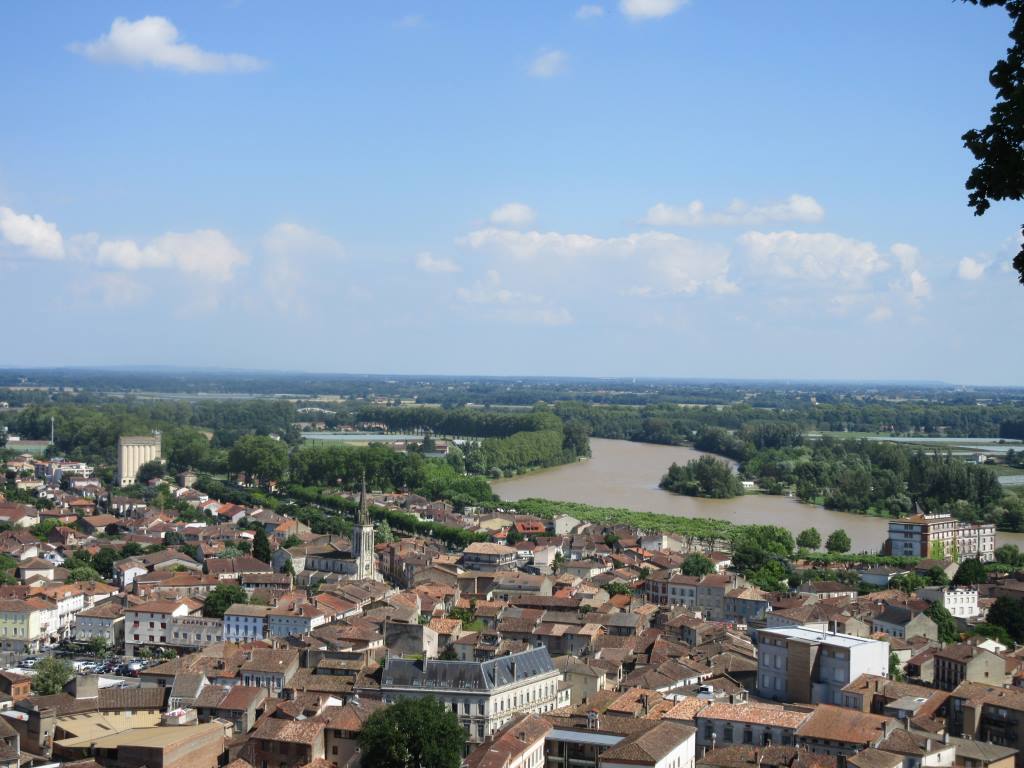 As I was too tight to pay for a view of the Moissac cloisters, I went home and visited Cahors’ cloisters for free and got to hear the end of the singing in the Chapel of the Sacrament. Today’s Secret Garden of Cahors is No.14 The Heavenly Lawn Garden in the Cathedral Cloisters Courtyard. 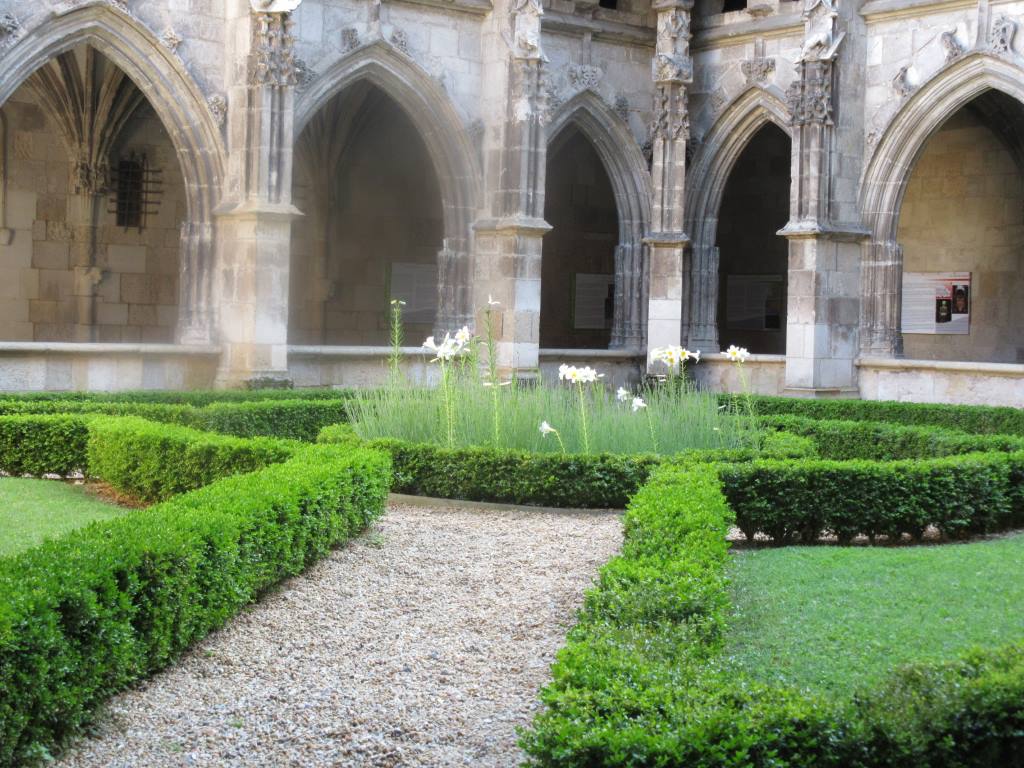