Every day I try to plan an activity that discovers something about the culture and heritage of small town France. With a trip to the market and then a cache in a sports and leisure park planned I hoped today we would see how local people go about their daily life on a Saturday morning.

Sainte Foy La Grande seemed like a good place to start with their central market surrounded by lots of cafés. However we discovered that with summer approaching markets are not really the place to find locals. They may pop into the market to get some fresh vegetables and rotisserie chicken, but basically the rest of the stalls are aimed at the tourists and the expat British community. We couldn’t find anything that interested our taste buds or met our budget, so we headed to the bakery. Taste of France today and the French word is Amande (Almond) Croissant; sorry no photo again as it was devoured so fast. Detouring to the car via a cache the only people (and their dogs) we came upon were British. They are the ones that don’t say bonjour but happily say hello when they recognise one of their own. The market was definitely a fail for discovering culture and heritage.

We went to Montravel for a puzzle cache in a sports park. The park had some small scale sports facilities, but no people, so another epic fail for discovering culture. The cache was too difficult for us to fathom so we headed over to the adjacent fishing lake to see the locals in action. However they were having a siesta, so we waited patiently in the high 20 degree heat.

Then all of a sudden the wind picked up, it went dark, people appeared to secure their gear and then disappeared again. We had already experienced European thunderstorms so we knew to react fast and get home. However we only got 5 minutes down the road and had to pullover due to the torrential downpour and hail and also because of the large river running down the road towards us. 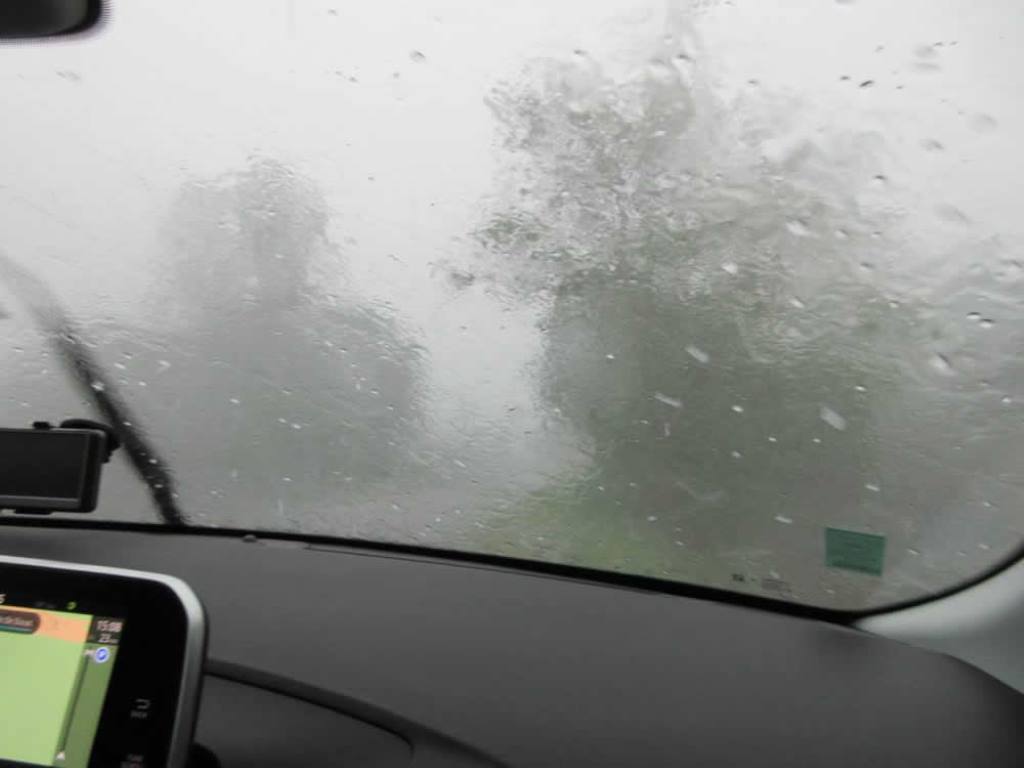 Through the thunderstorm we finally experienced some culture and heritage. It’s the culture of the French to drive like maniacs, no matter how narrow the roads. However during a torrential rainstorm they actually avoid driving, pullover and sit the storm out or slowdown with their hazard lights on. France has a 90kmph speed limit on country roads which will be dropped to 80kmph from June to help lower the road toll.

Most of the areas we have visited are of a hilly, river carved valley terrain. In the middle ages bastide-walled villages were built on hills because they had the best vantage points and could better protect the people from the advancing enemy. The villages had rampart walls, small gated entrances, and cobbled paths and terraces. With the advent of population growth, infill housing has occurred along with asphalt roads and car parks. We discovered from the storm that all these heritage stone constructions are detrimental to those who don’t live in the bastide villages. As there is no soil to absorb the rain, the water rises quickly in the narrow lanes between the rows of houses and flows down the hilly slopes in large volumes.

I’m glad we decided not to have a cultural evening at the Duras chateau listening to orchestral music as at 9.30 the thunderstorm started again. We couldn’t even go to the local as Manchester United were playing Real Madrid at soccer so the pub is full of people who don’t have an ounce of French culture.