Normally we don’t go venturing too far on a Sunday because nothing is open however I managed to find two villages, rich in Crusader history, that love tourists on Sunday. The first was Saint-Antonin- Nobal –Val, believed to be one of the best medieval towns in France because of the number of 12th century buildings still in existence. The town has a lot of historic buildings and features, such as convents, tanneries, mills and churches, especially important for all the pilgrims on the Santiago de Compostela. We went there for the market, which turned out to be one of the best we have been to yet, even though it cluttered up the main square of medieval buildings and covered market halls. In fact it was so popular the market was crammed with people and you had to park miles away. Saint Antonin is also famous (well to us it is) for being the set of the film ‘The Hundred Foot Journey’, a great romantic comedy starring Helen Mirren. 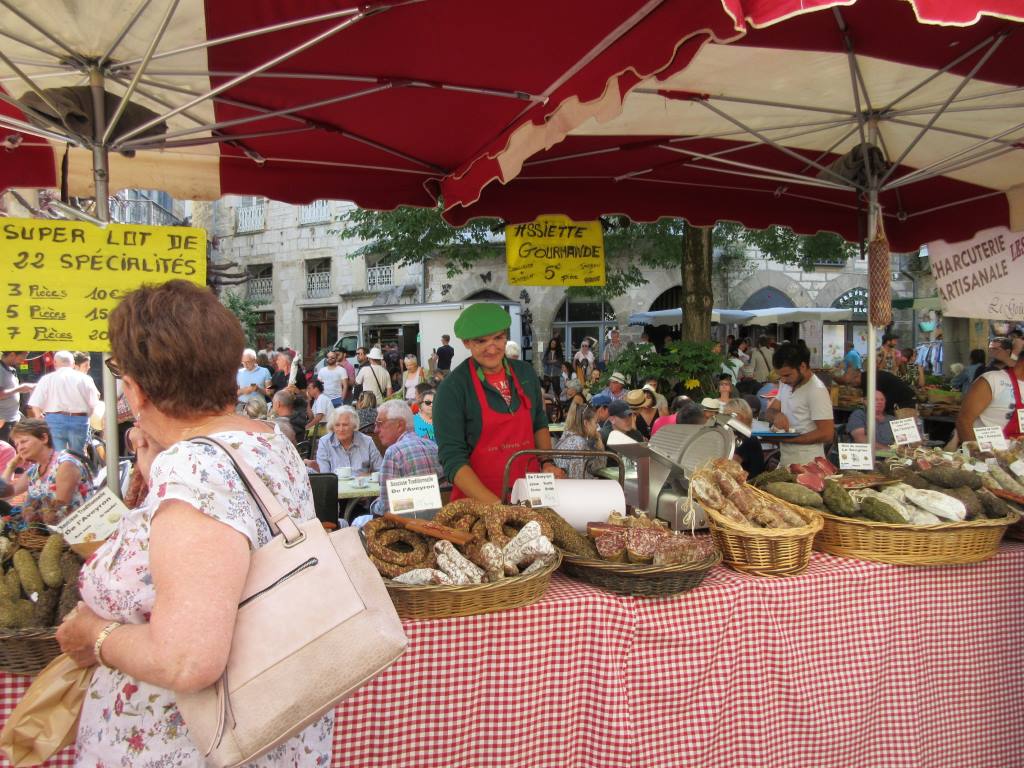 The market had a wide variety of crafts, clothes, fresh produce, meat, cheese, and breads, but most importantly it had take-away or fast food. You could choose between expensive English pies (€7), kebabs, frites, chicken, crepes, tarts, sushi and filled flatbreads. Our Taste of France today came from the €3 flatbreads, I had a filing of spinach and nettle and Roger had Feta cheese. 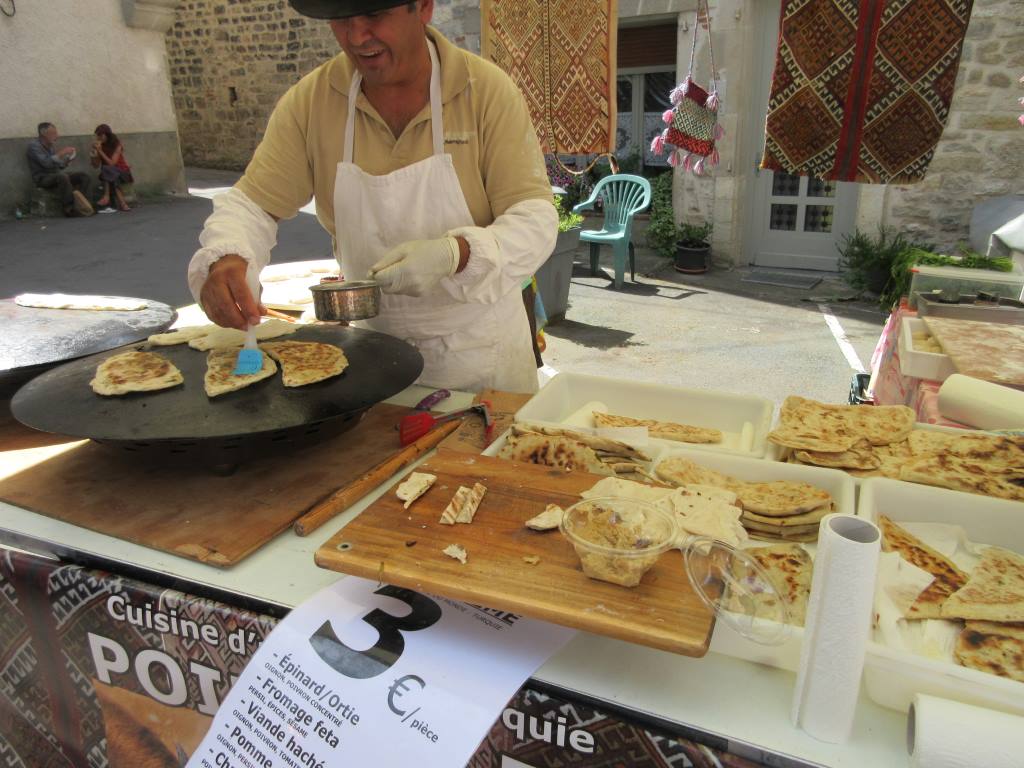 The second town we went to was Cordes-sur-Ciel, French word of the day is ‘Ciel’, which is sky. The town was originally called Cordes, but adopted the ‘in the sky’ after some poetess described it as being high up in the clouds. The area is rich in Crusader history as there were a lot of crusader battles in the 13th century between the Catholics and the Cathars (supposed Christian heretics). One of the Crusade’s leaders Raymond, Count of Toulouse, owned a lot of land here and not only led a crusade to the Holy Land but fought crusades in the local area. In order to protect his lands he instigated the building of the first bastide town in the south west of France, which is Cordes.
Cordes-sur-Ciel was voted the most favourite town in France in 2014. 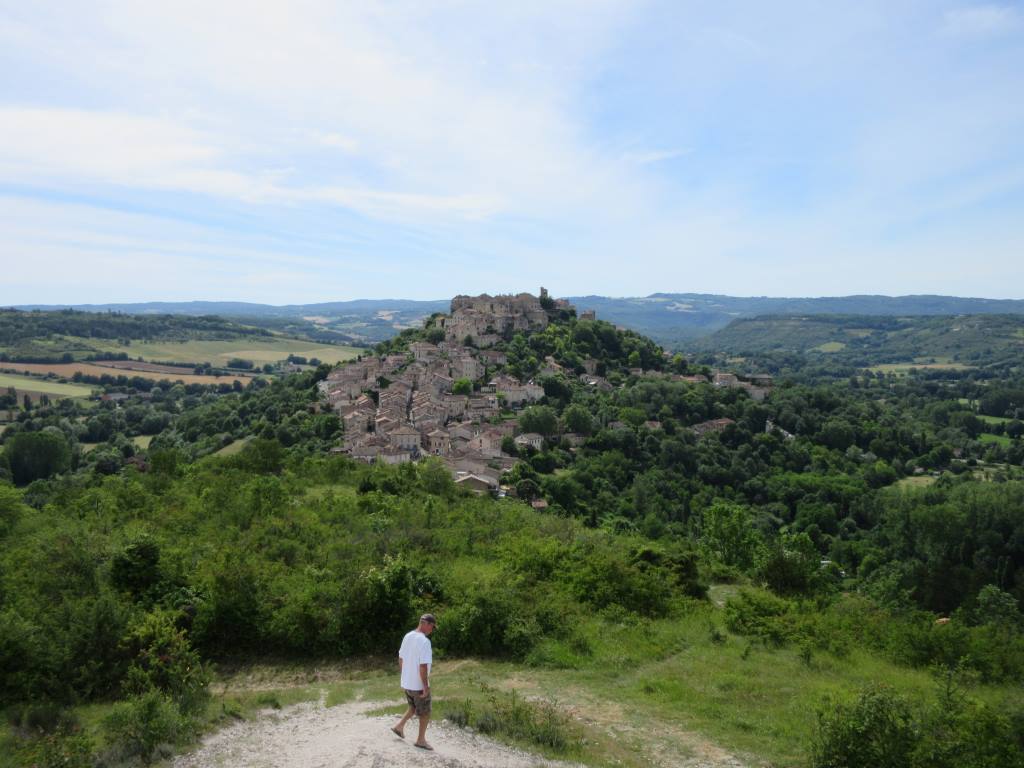 Being a popular tourist town unfortunately you have to pay for parking, €3.50 for 11 hours, so we made sure we did everything on foot, even climbing from the bottom of town right to the top up the steep paths. It was hot, it was steep, it was cobbled, but every other overweight unfit tourist did it to save a few dollars instead of taking the little train. 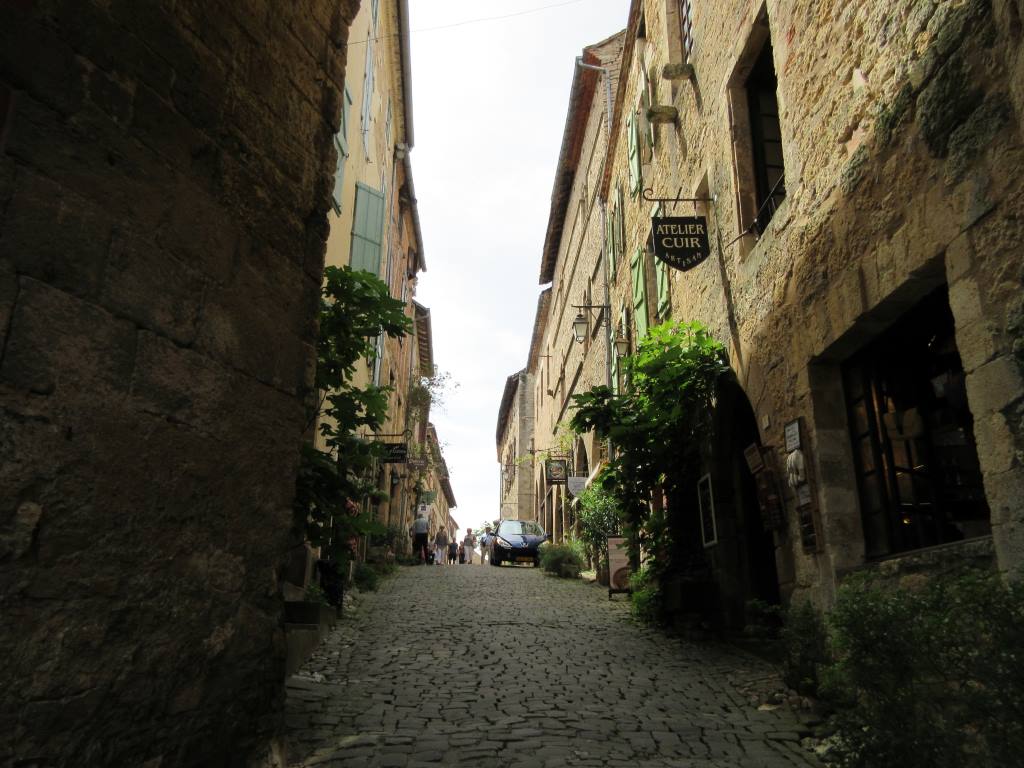 Prior to going up the hill we did go and visit the Gardens of Paradise, which are private gardens open to the public. Although small, there is plenty to see and lots of metal insect art. 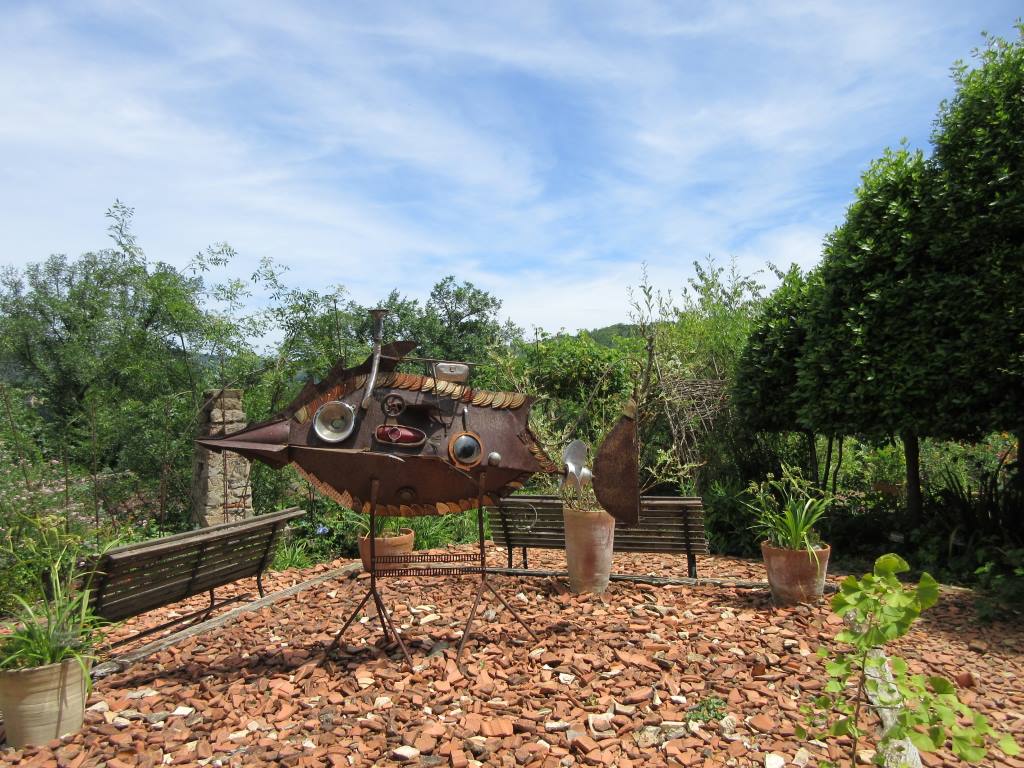 Back to our hill climb, we arrived at the top where there are restaurants, tourist shops, a look out etc. We spent a bit of time in a shop selling old tapestries and calligraphy products, but couldn’t afford to buy any. I also visited the Museum of Sugar and Chocolate Art, which got me a tour and a tasting experience. 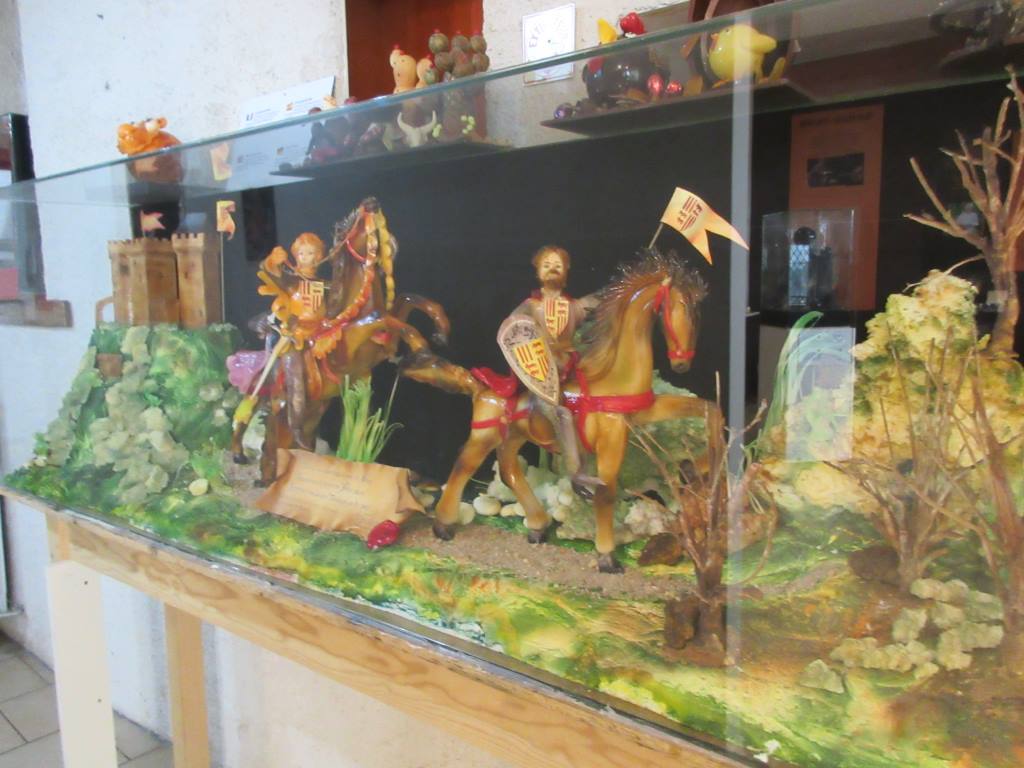 We did go to some other tourist shops, but the prices they were charging for crusader stuff was a bit over the top. So we went geocaching on a hill that overlooks the town and to an old chapel in the woods. The chapel is 19th century, but marks the place where the Black Death victims were buried. There were other buildings in the area, at the time, where lepers and contaminated people were sent when they were banned from Cordes. 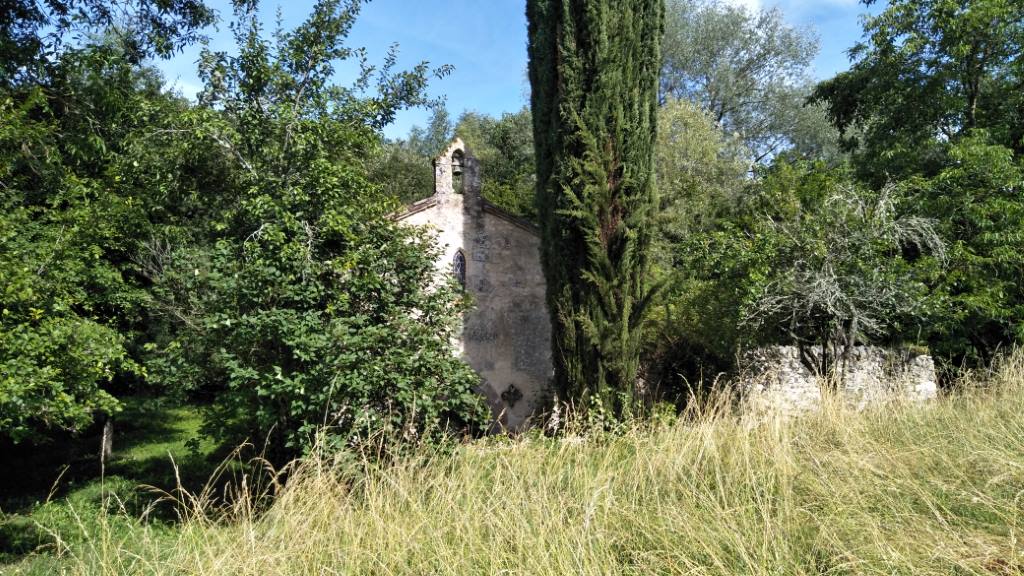 All crusaded out and not a souvenir to show for it, we went off and discovered Cahors’ secret garden, No. 20 the Crusades Close. It is near the fortified gate, outpost and hanging tower of the old medieval city. The plants are supposed to resemble those brought back from the crusades. 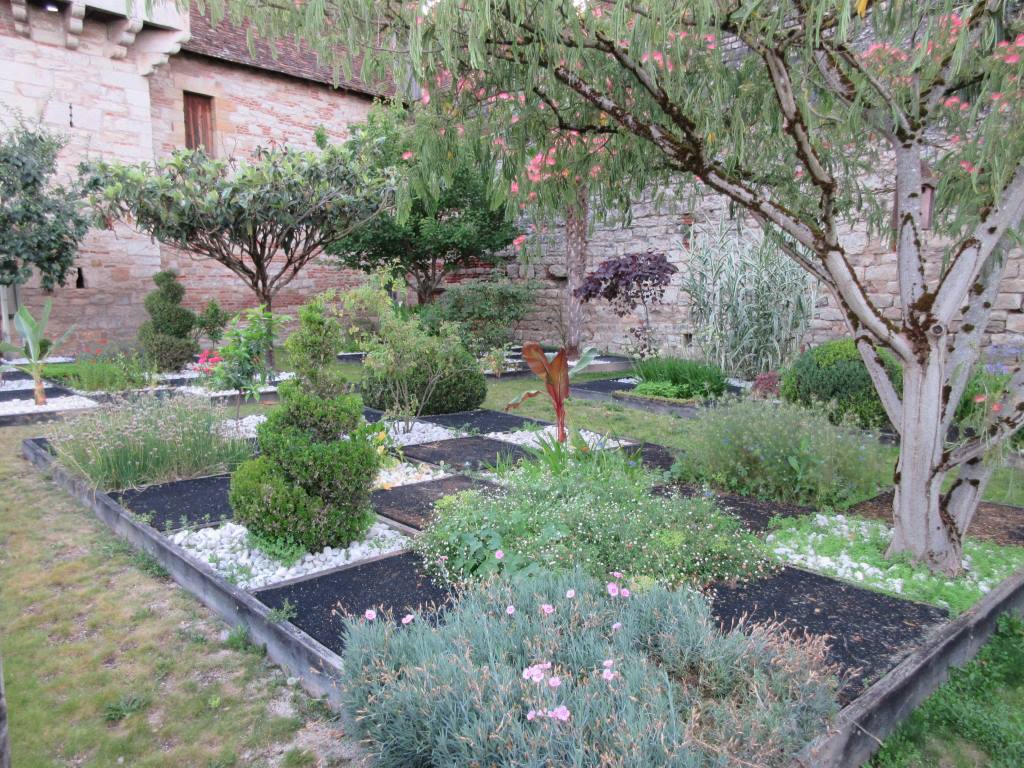