Today we ventured out east of Cahors following the Lot River to Saint Cirq Lapopie. The valley road takes you through lots of France’s “most beautiful villages” (the Tourism Boards description), and runs parallel with a stretch of the Camino de Santiago pilgrim trail. Our first stop was at Vers to visit one of the beautiful villages. From the photo you can see how these towns are affected by the river and its varying levels. Although the towns are small they have a lot of restaurants and hotels to cater for the sightseeing tourists that come for the river, the cycling, the pilgrim trails and the beautiful ancient villages. These tourists are mainly French and Dutch, the British can’t seem to get pass the Bordeaux wine region. 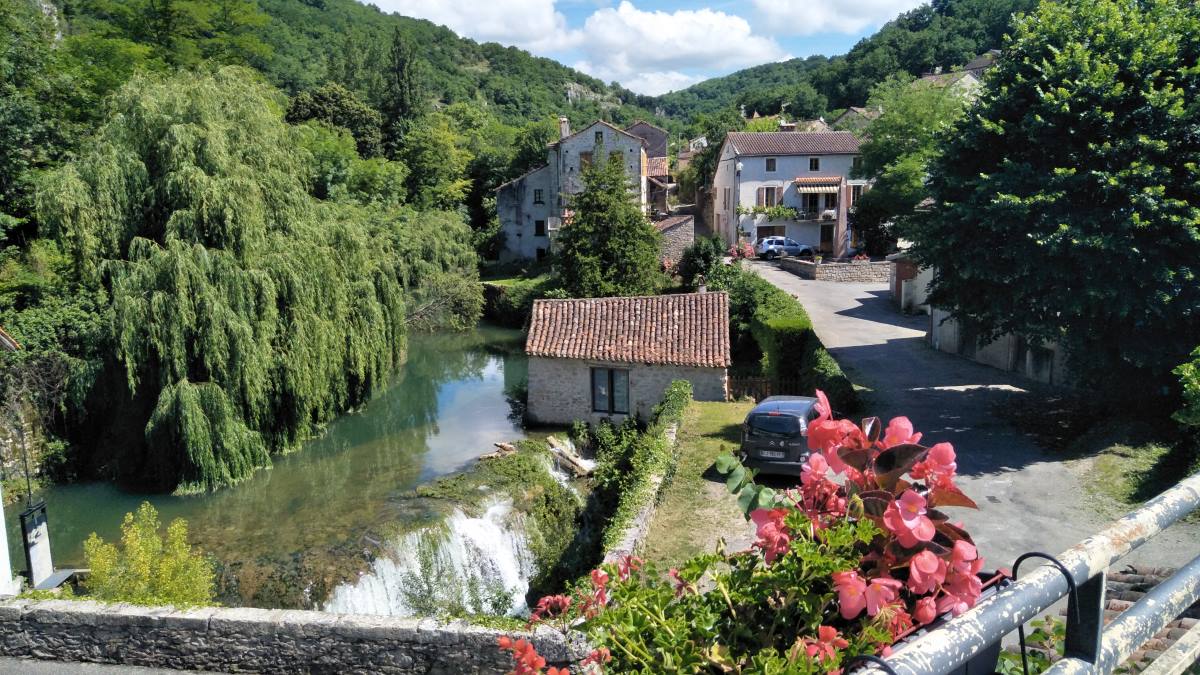 The next town we stopped at was Saint Gery for a geocache. It said terrain 4 out of 5 which means steep, it also said good footwear required, but as we drove right to the top of a hill we assumed that the terrain rating was wrong. However we were fooled because you walk down a steep cliff on the narrow pilgrim trail, and then have to walk back up again. The cache was near a cave which had the remains of a leprosarium: a shelter for pilgrims, specifically the sick. The cacher in the photo had true pilgrim footwear – jandals. 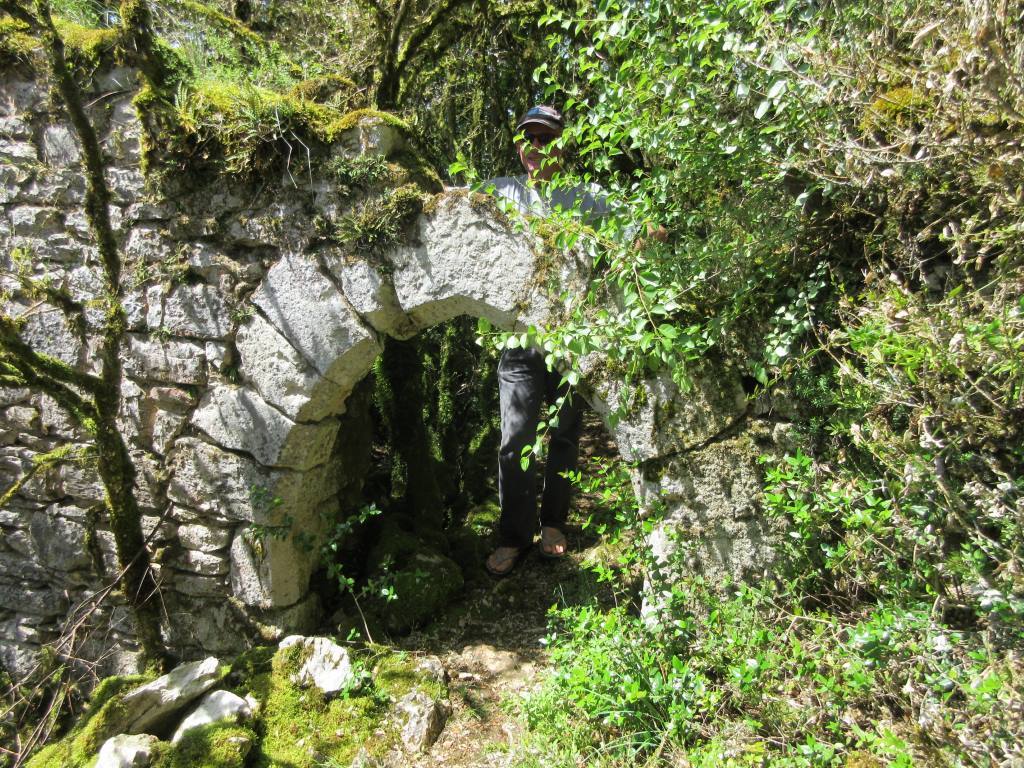 The next cache we did was at the village of Bouzies. In 1845 a towpath was created along this stretch of the river for horses to tow barges through the currents with local goods to take to sea ports. Our geocache took us along the towpath, on the railway line and through parks with random art. The whole time we are “bonjour” “bonjour” to all the modern day pilgrims. 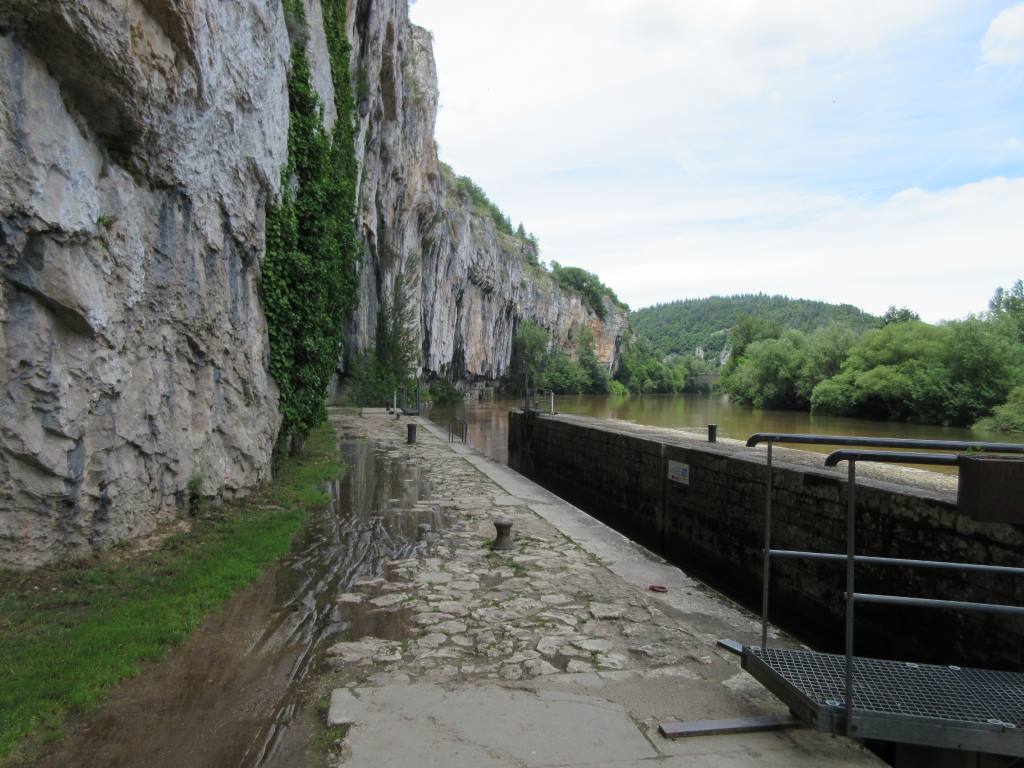 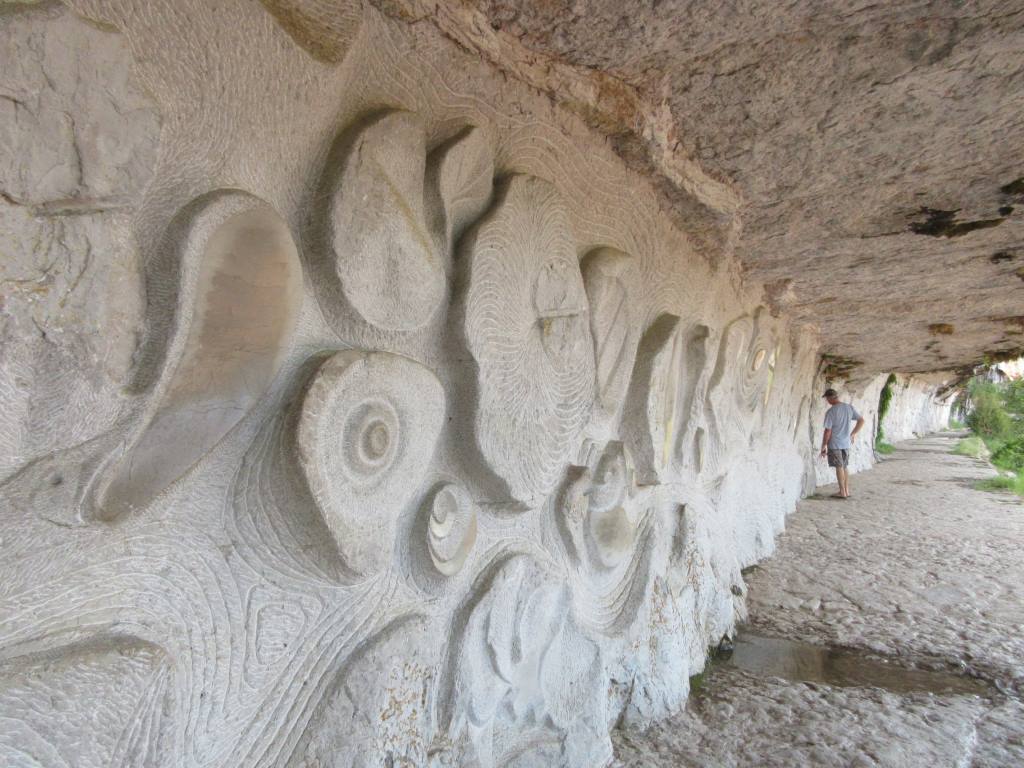 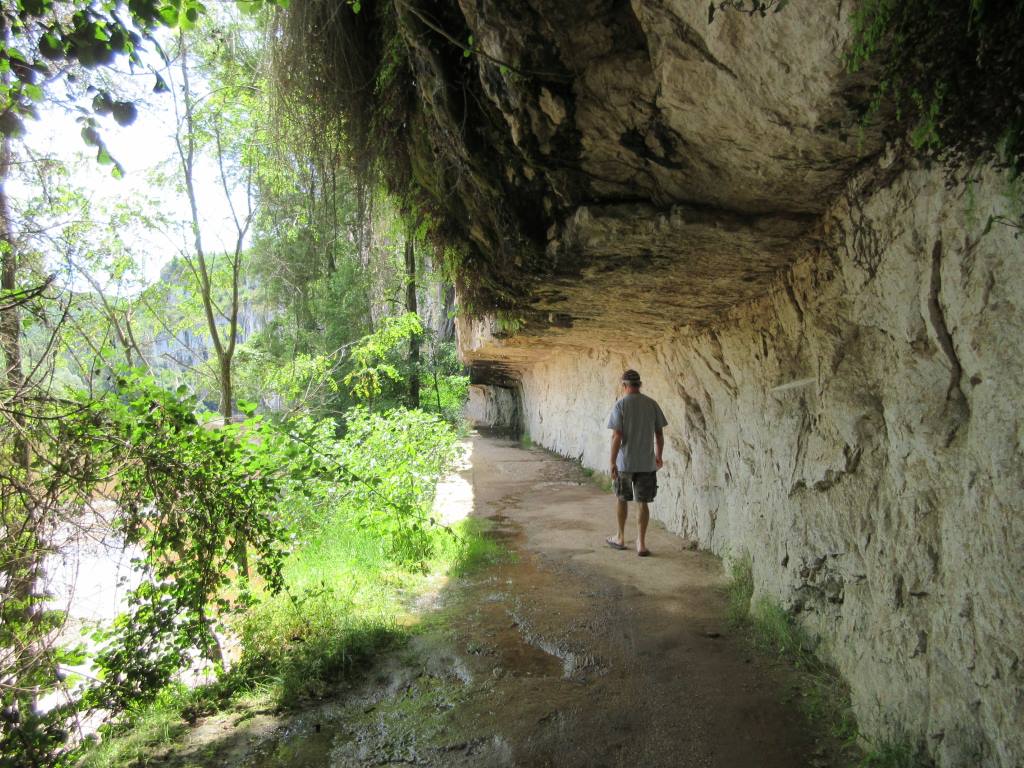 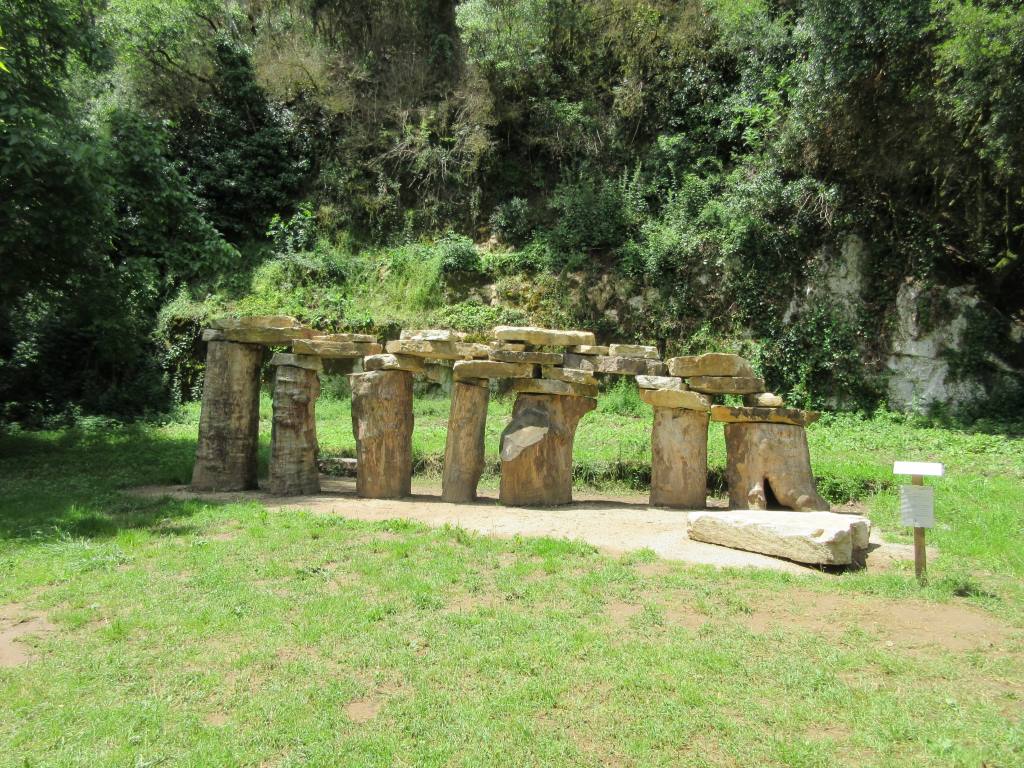 Our last cache for the day was at Saint Cirq Lapopie. This was an earthcache which means I had to discover how part of the town ended up on a rocky peak. Way back the valley filled up with clay sand, people arrived and built on it, and then the Lot River eroded the clay away leaving only the village that was not built on the clay. This village is a tourist magnet, besides the geographical features there are only restaurants and souvenir shops in medieval buildings. It is a beautiful village and because of land constraints they have had to build car parks to cater for the tourists. You can park for €4 or do as we did take the 30 minute free option. This requires me dashing to do the cache while Roger drives around and then both of us running up the rock, taking the obligatory photos and down again. The next three photos are 1) taken from the cache looking at the rocky peak, then 2) the reverse shot and 3) views from the rock. 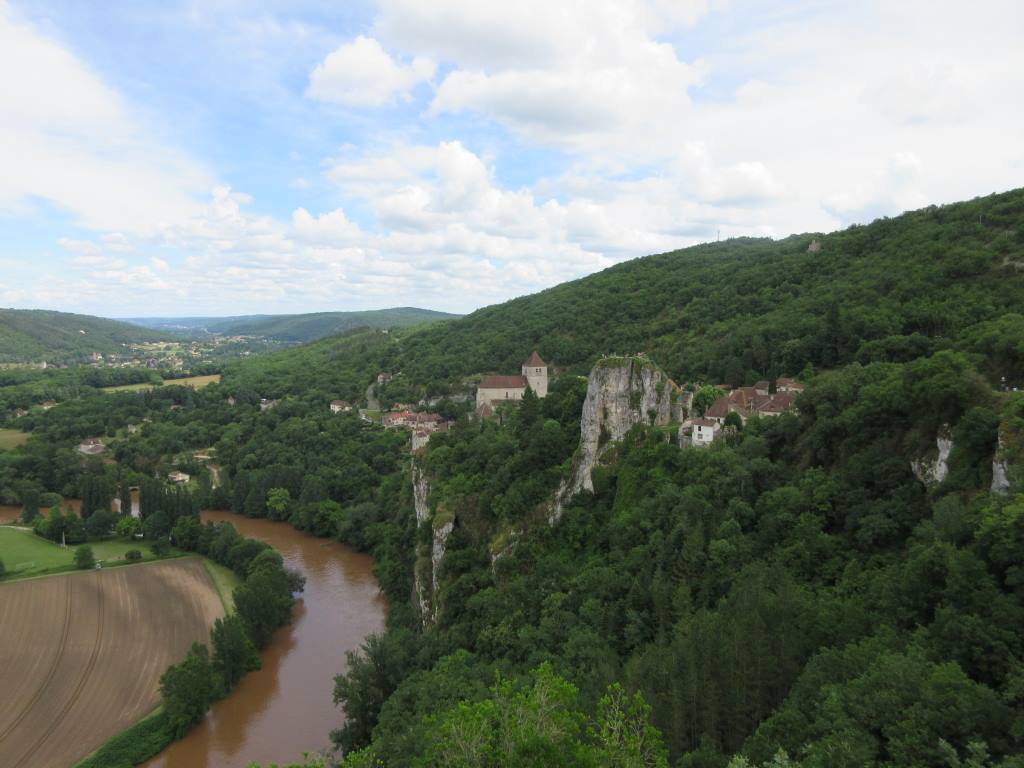 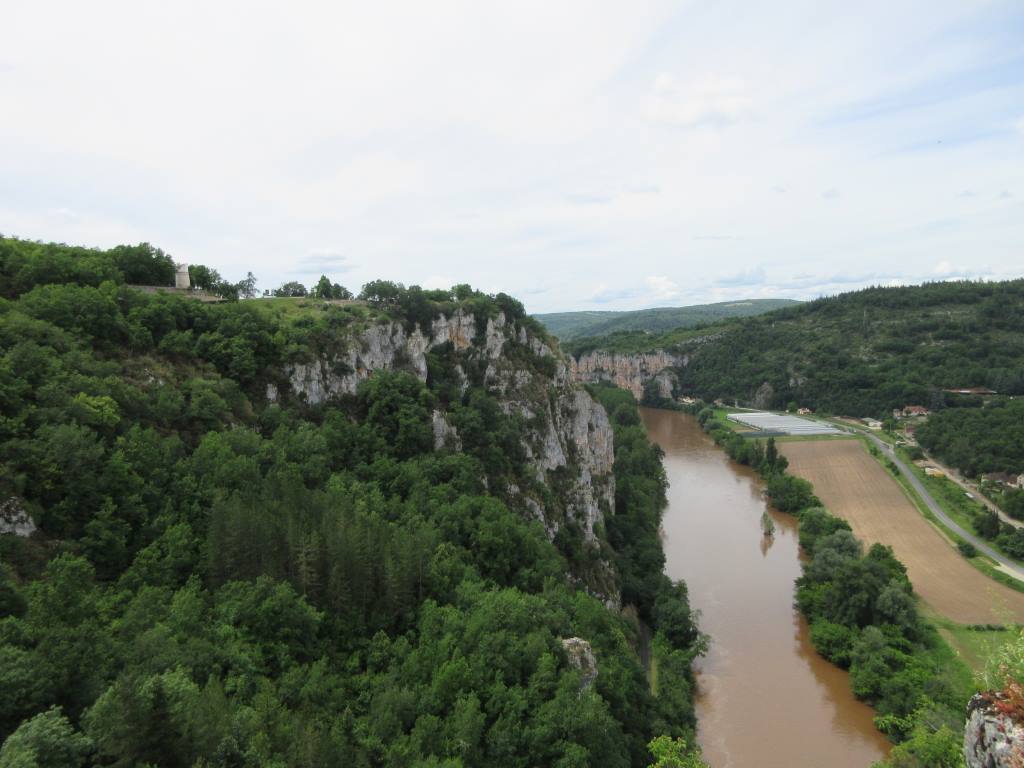 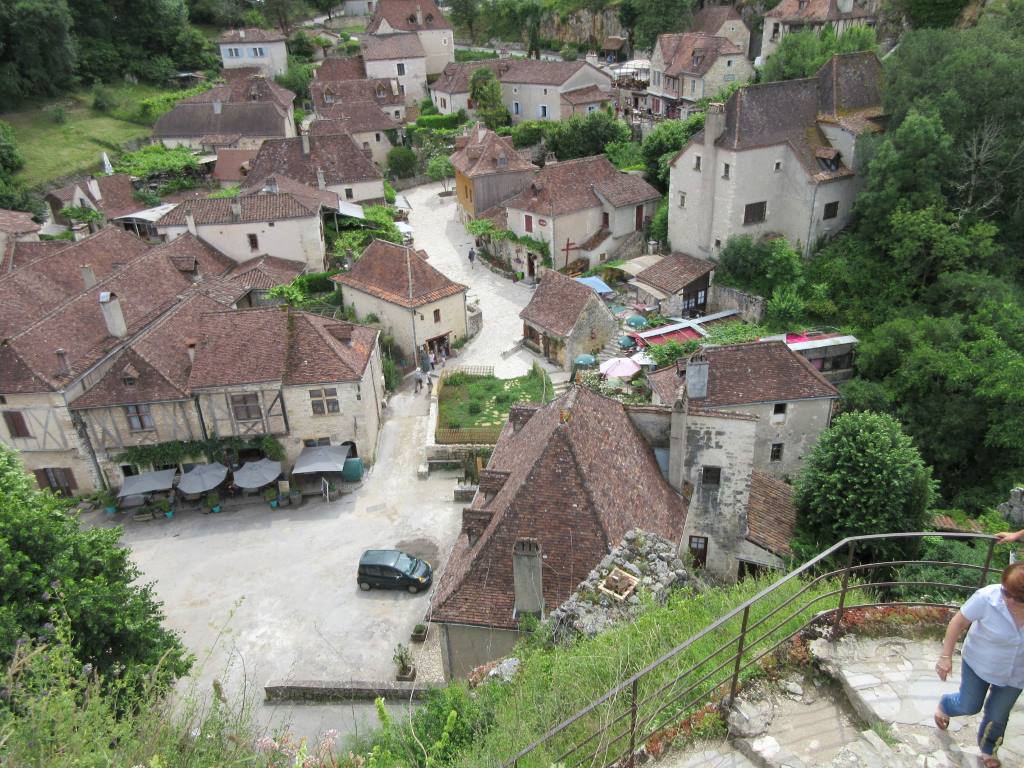 The next photo is a church built high up on a rocky outcrop in Laroque Des Arcs. You can’t see but underneath that is a stone building built into the cliff. I can’t image many people walking to church up there, so it was probably another pilgrim thing. 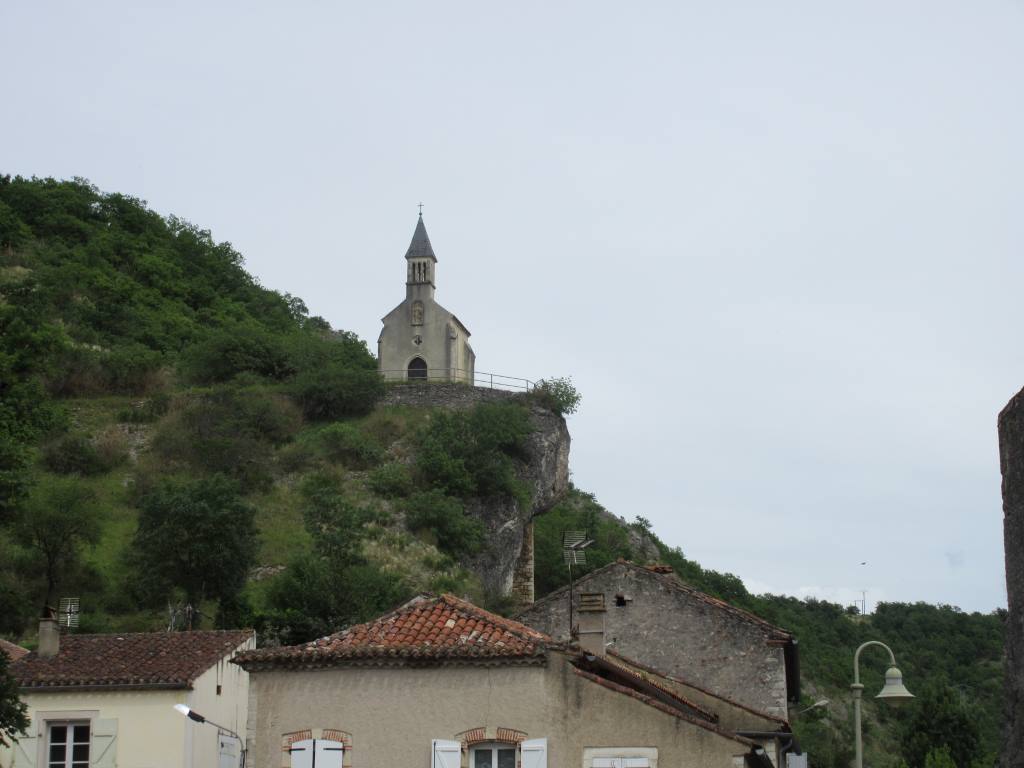 Today’s taste of France comes from a comparison of two nut tarts. In the morning I bought a nut tart for geocaching stamina, it was sickly. It had a sweet pie crust, filled with nut paste, whole nuts and the covered in chocolate. After geocaching we couldn’t buy cheese for our baguette because tourist villages only want to sell you expensive lunches. Therefore we went to the bakery and I bought a different nut tart, this one was a sweet pie crust, filled with a layer of nut paste, then a nut flavoured mousse, topped with a walnut icing, much nicer than the first. 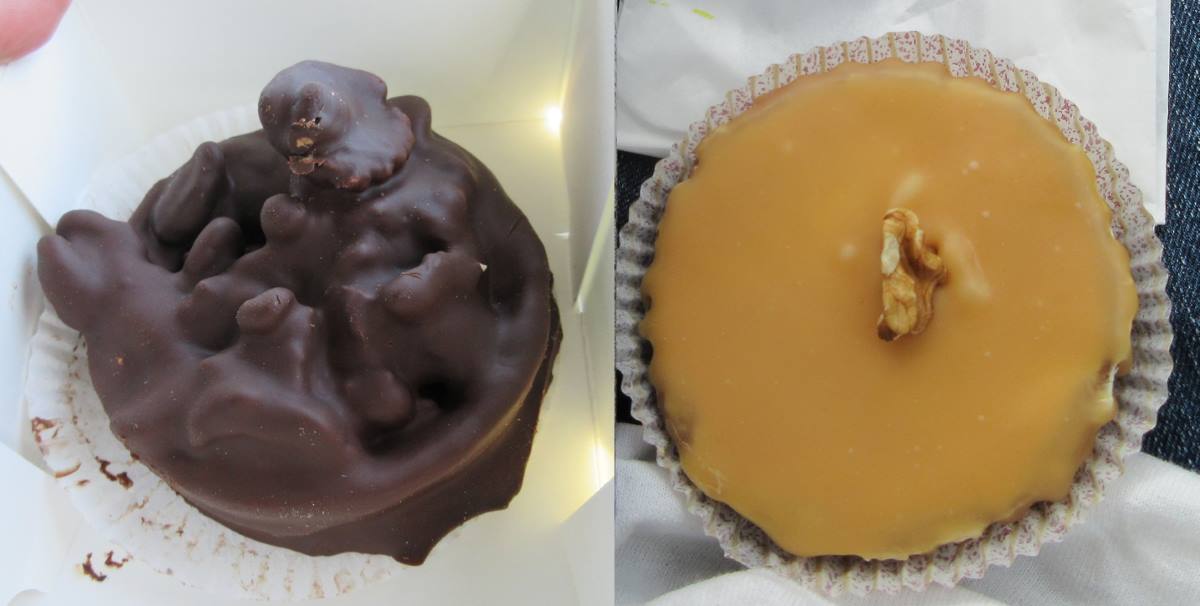 Today’s secret garden of Cahors is No. 25 Hortus of the Melusine Fairy. The name of the garden is something to do with an old medieval novel about a fairy turning into a snake when she was angry. The novel sounds weird but the garden of white roses and green grasses was nice. We found this garden after we abandoned our free : Cahors - plenty of Cultural Immersion events involving listening to young person’s music, if you could call it music. 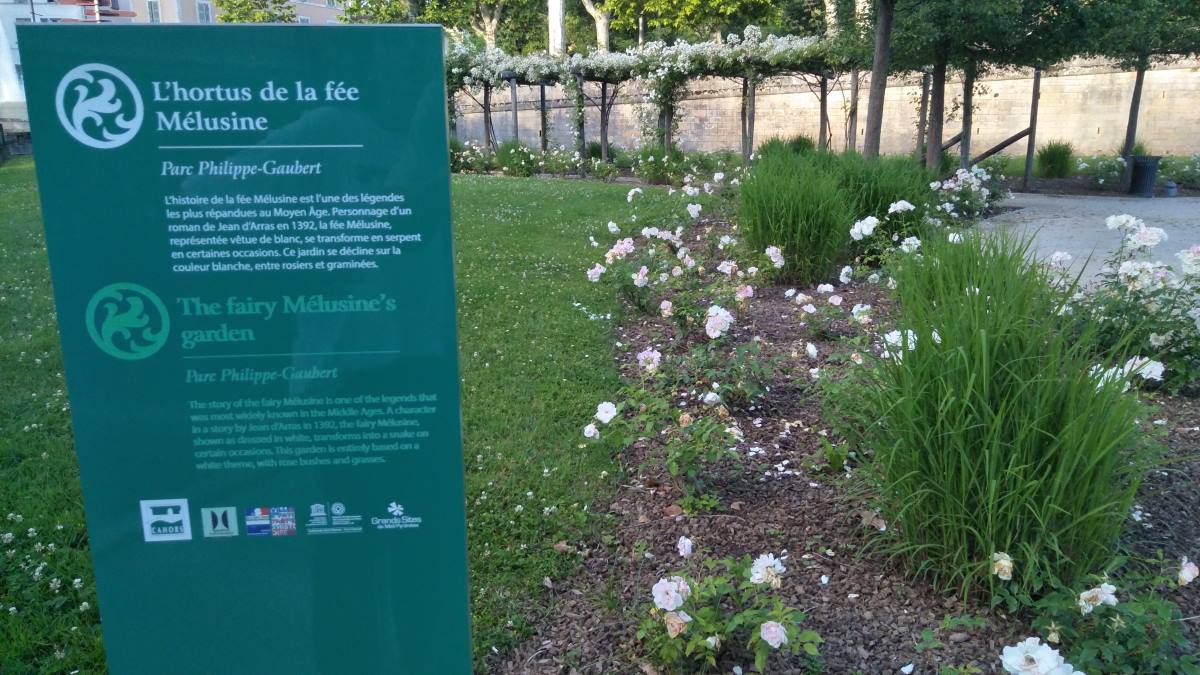 Last photo of the day, the outsider cat, he comes to the garden every day and gets bullied away. 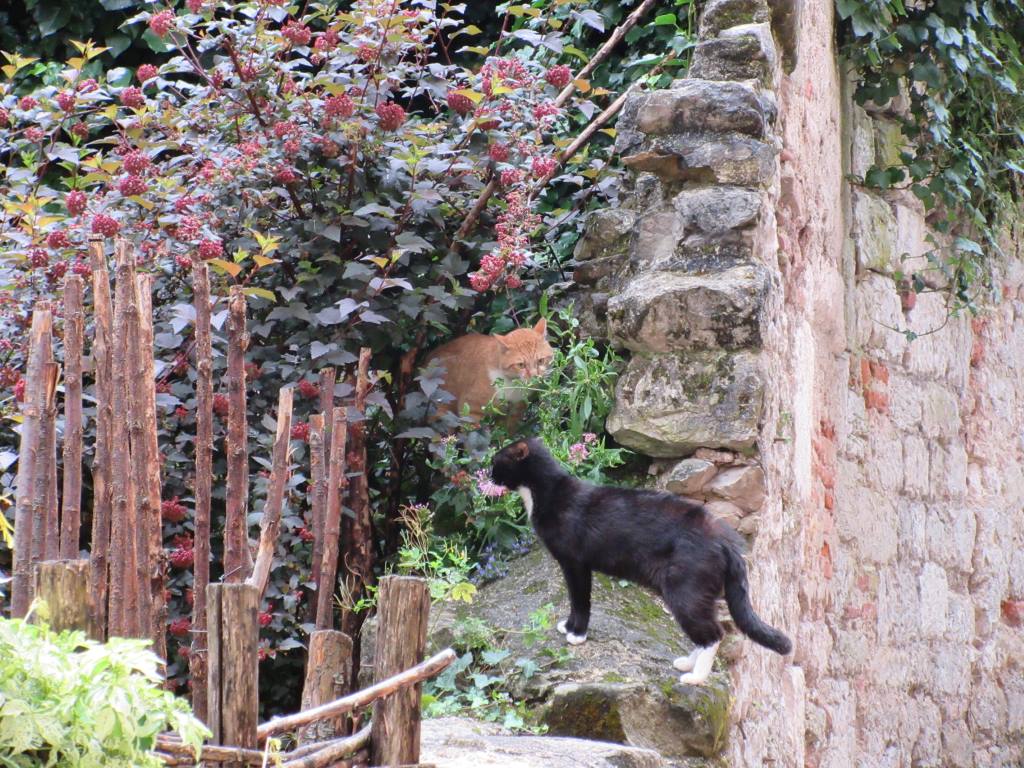