It’s “Cultural Immersion” day where I choose an activity from the Departmental website to immerse myself in the community and experience their culture. Luck would have it that Terra Aventura’s geocaches that take you on a town tour are listed as a community activity. So today we went to Meilhan-Sur-Garonne for our “Cultural Immersion” cache because it has some rowing significance as well as being a scenic place. Along the bottom of the hillside town there is a canal, a walking track, plus a cycle path and the Garonne River. The Garonne is large, swift and dirty, so not much good for rowing boats or pleasure craft. The canal runs almost parallel with the Garonne for 194km from Toulouse. It links up with the Canal du Midi (popular long distance rowing course) and helps form 600km of waterways for long boats and other pleasure craft boats to go between the Atlantic and Mediterranean seas. The well maintained path alongside the canal forms a large cycleway that goes from Bordeaux to Toulouse. In the time that we were there we saw several cyclists and boats making use of the great facilities. 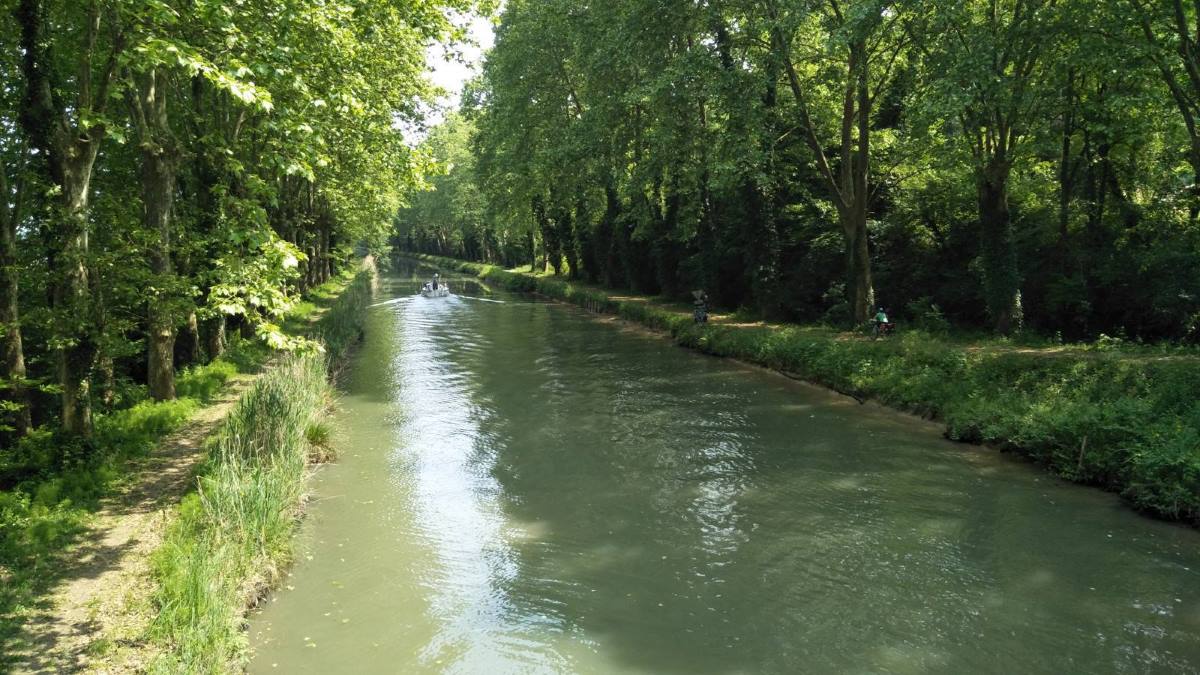 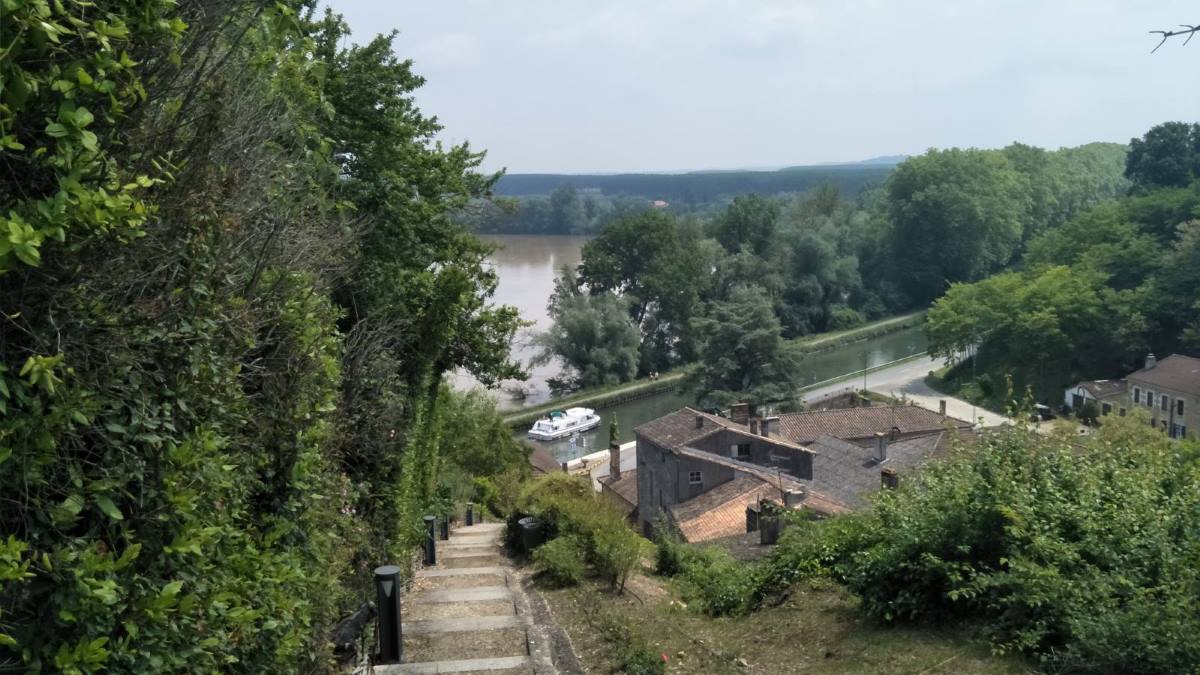 Before attempting the cache I did read its health warnings of walking up steep stairs and climbing hills. The cache started off well, there were stairs down to the canal, unlike the conditions for the Council workers clearing the steep bank (see photo below). Then we starting to climb back up, stopped to count unusual windows in a medieval house and ended up immersing ourselves in the community. It was lunchtime and there were two local women having a smoke and a chat outside the house that we needed to count the windows of. They insisted on helping us and when they discovered we were doing the cache they demonstrated the steep stair climbing, sore calf muscles and started counting in English, then laughed. One said (in French) "You English?" and the other replied "very English", more laughter. Maybe only the English are silly enough to climb the stairs and the street, which is actually called ‘Breach of the English’, a result of a 13th century war between England and France. We had to breach the barriers today as well because the Council workers had fenced off the clues to our cache; it’s amazing how much English they know when forced to deal to trespassing tourists. 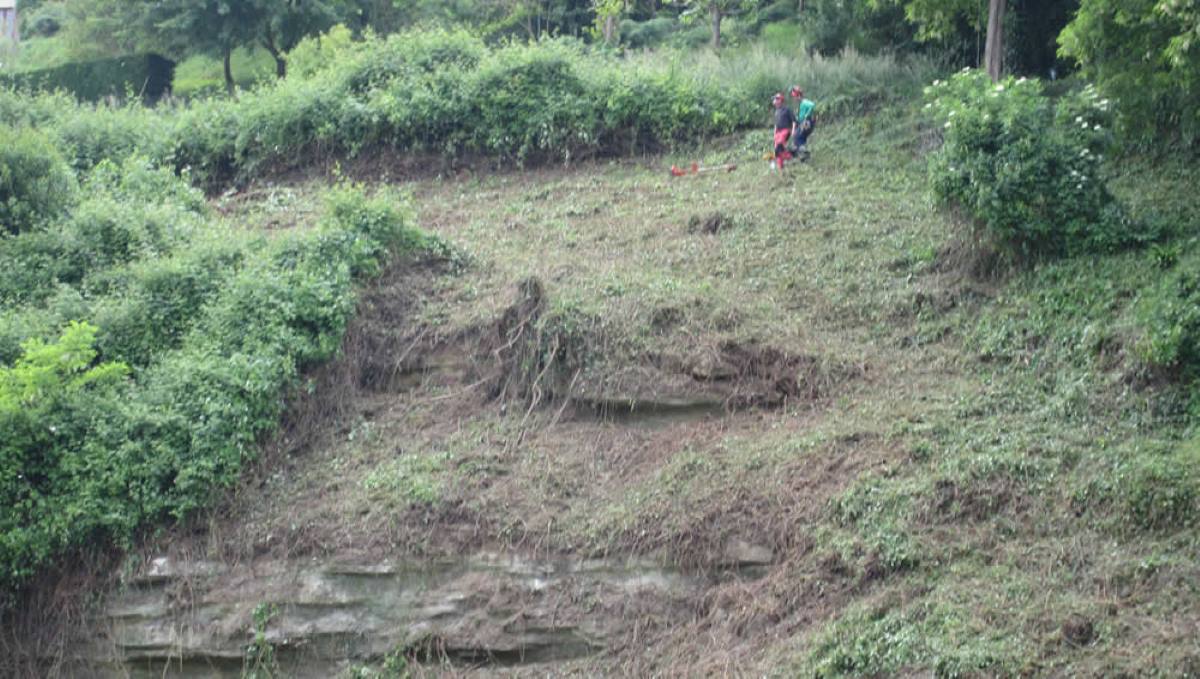 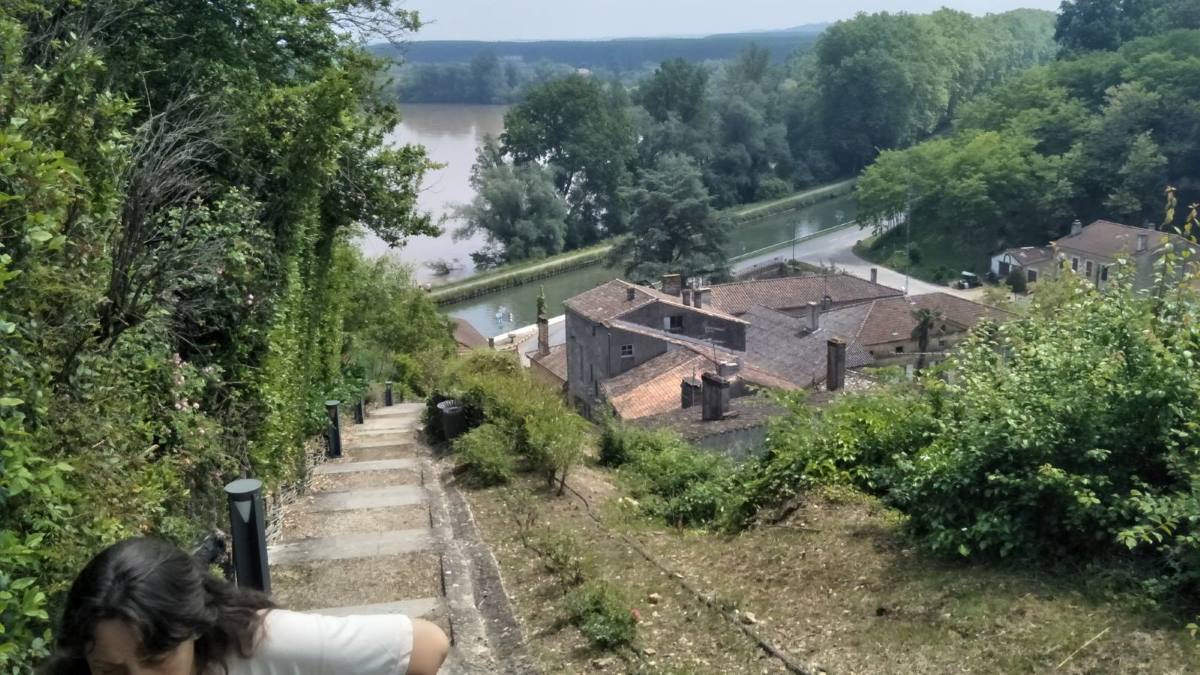 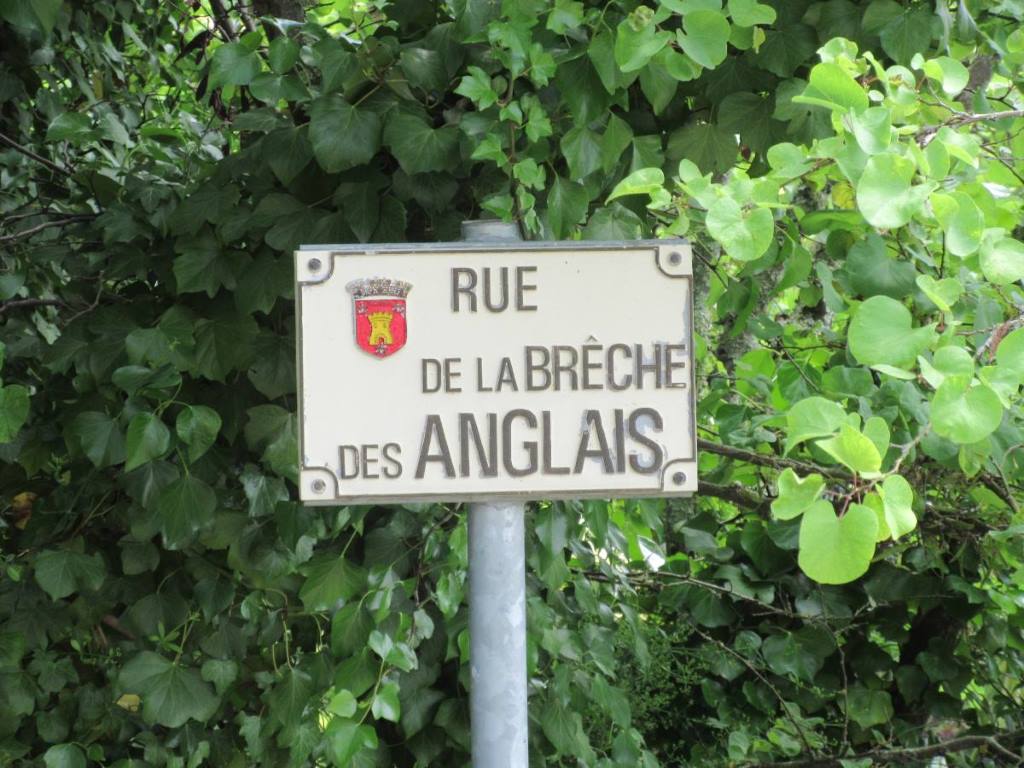 We did some other caches along the canal and managed to piss-off a guy fishing because the retrieval of the container, right by him, created a bit of noise. One cache location helped reveal what the cages on the edge of farm land are for - storing maize (see below). 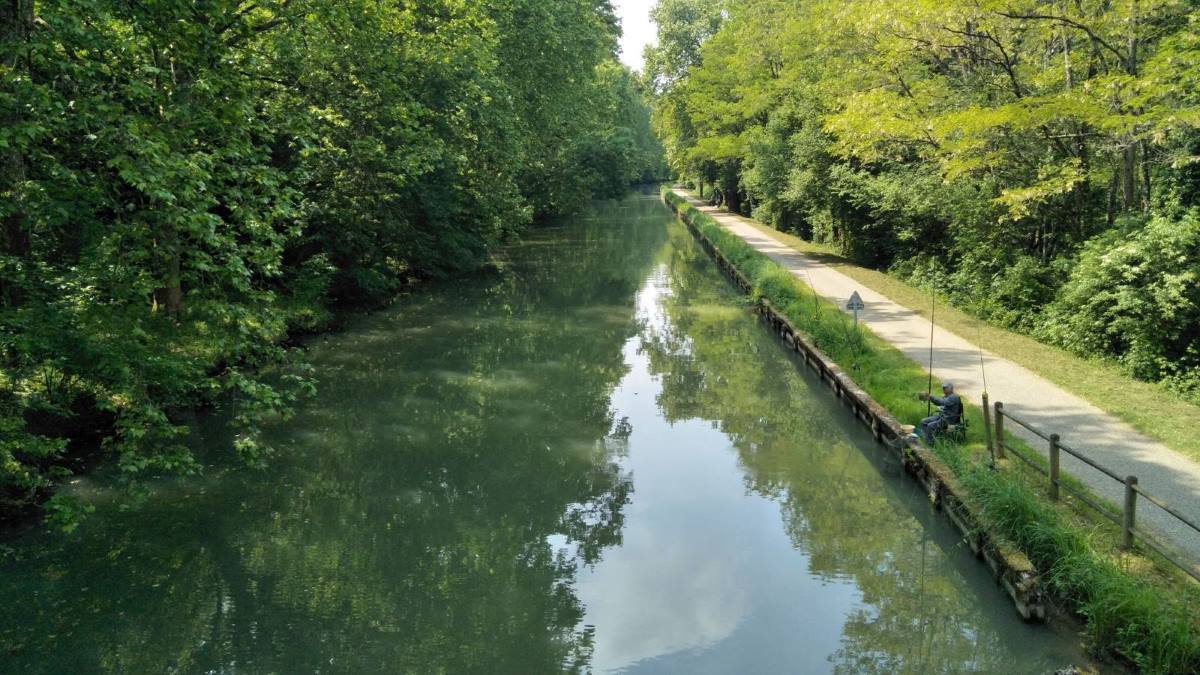 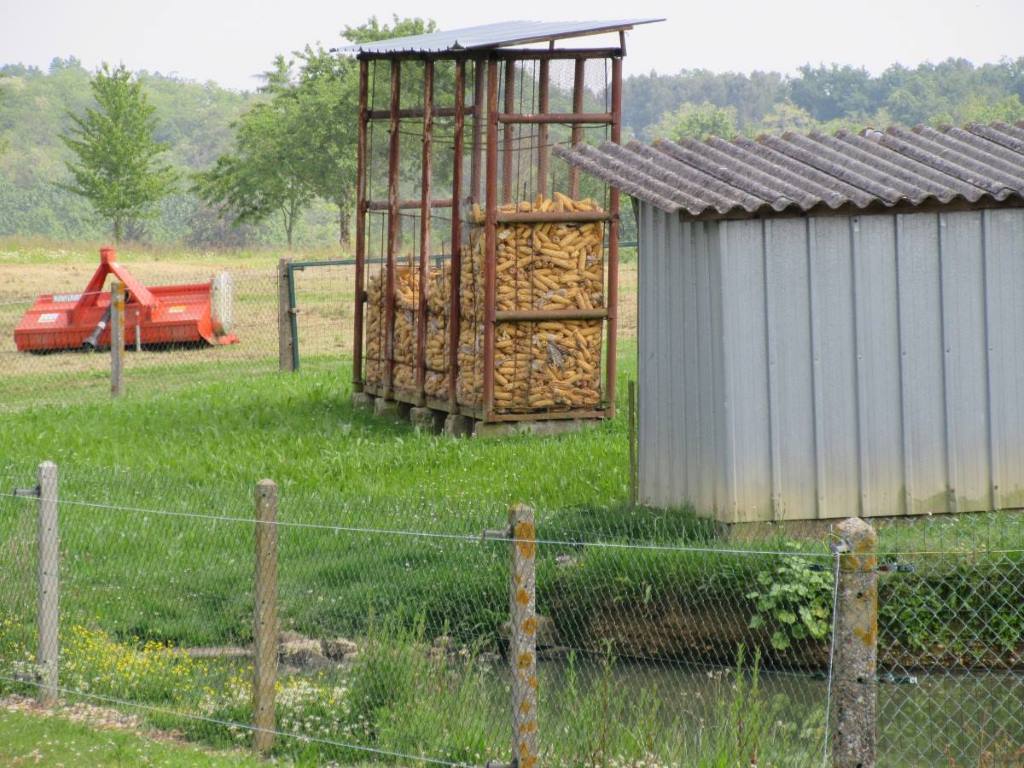 A goods days caching in the sun as we found them all, met some locals and took in some nice scenery. I even managed to walk off my taste of France today, a lemon meringue tart. Today’s French word is ‘Papillon’ which means ‘butterfly’, but if a sign says ‘Minute Papillon’ it means ‘wait a minute’. The sign on the glass recycling bin (see below) had this expression on it which I interpreted as a polite ‘just a minute butterfly’, I was kind of right. 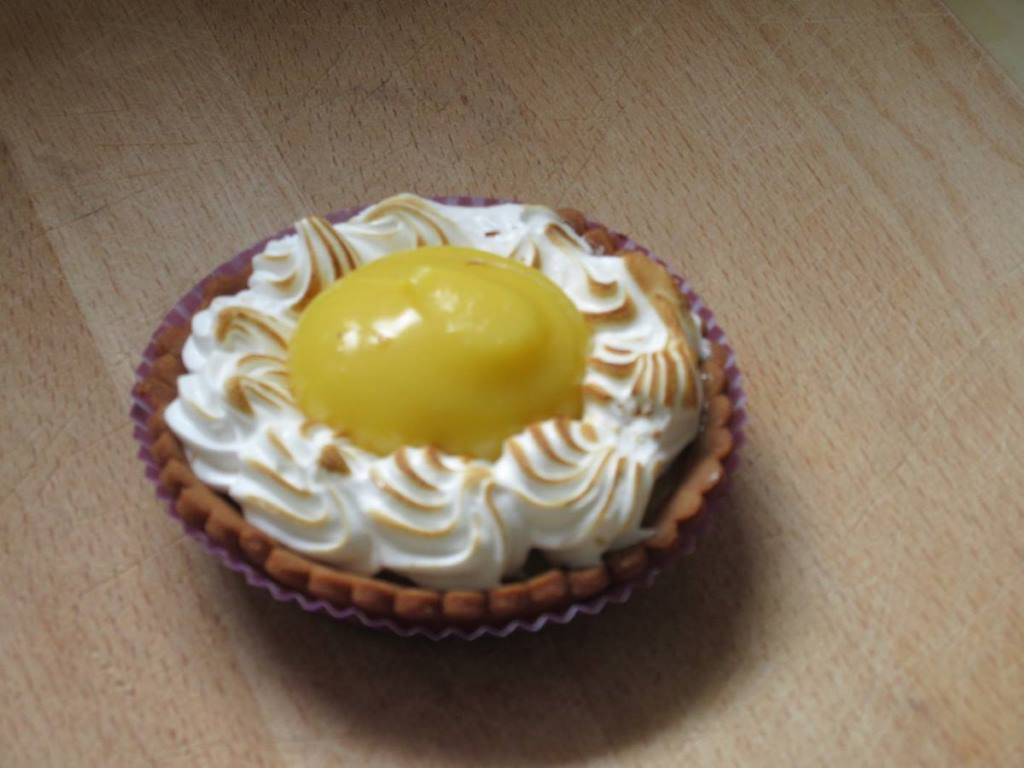 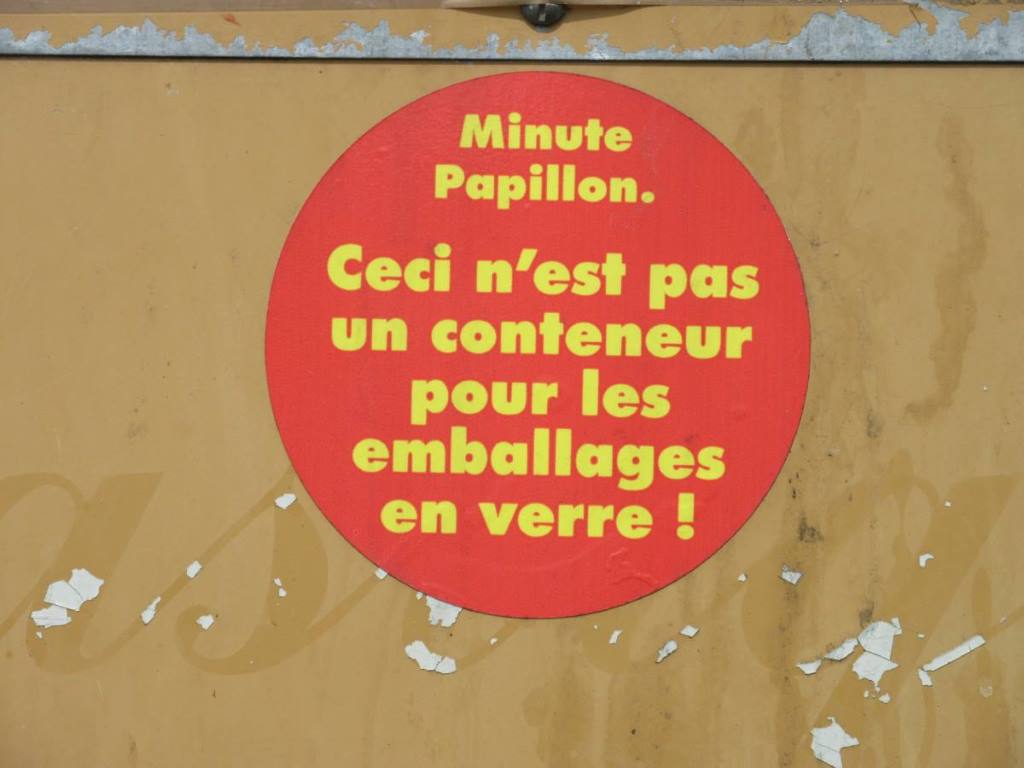