Our day started early as we wanted to discover some new areas today and then get back home by 1.30pm to let the electrician in. The first town on the agenda was Septfonds; their name comes from the seven sources of water (fountains) that supplied the town many moons ago. I chose this town as a starting point because it had a Wednesday market; however it was quite small and didn’t inspire us to get our wallets out. Just out of town they have two geocaches, one based around the shared kiln where village folk brought their bread to be cooked. Maybe I should suggest to our neighbours that we should get a shared pizza oven. The second cache was at an old pump that pumped the water from one of the seven fountains. The town has grown a bit since those days and moved slightly west, but at least somebody is keeping the old relics around and available for the public to see. 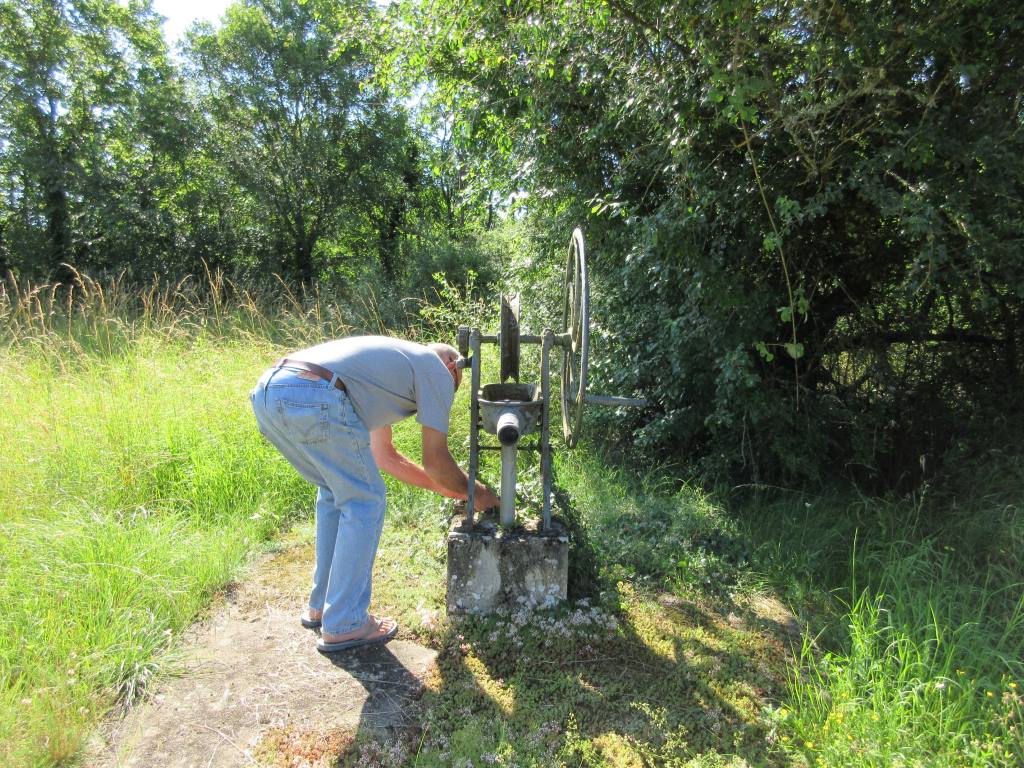 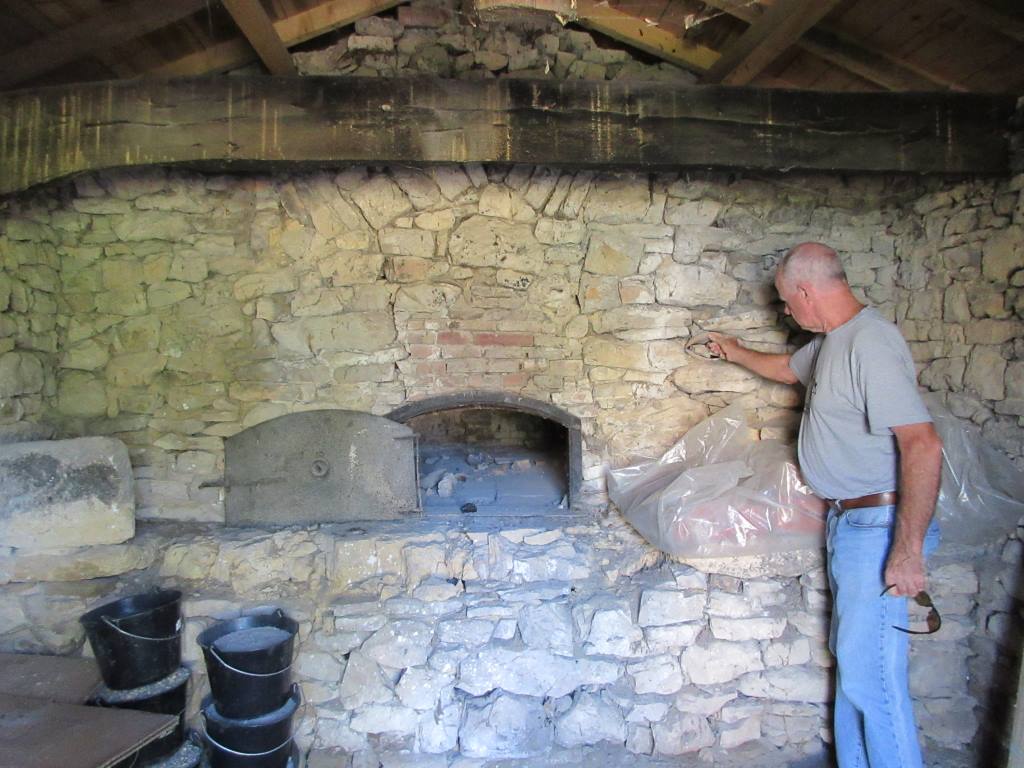 The second town on the list was Caussade, we had seen signs promoting the town on a couple of our other trips out of Cahors, so I thought there must be something there. However the internet said bypass it, no riveting tourist attractions to see. We went there, did a cache in the park, saw no signs of any tourist attractions, but saw heaps of cars going somewhere in town.

The last town on the list was Montpezat-de-Quercy; it was far more tourist friendly. It is a bastide town that like the rest was hit hard by the English wars, the religious wars, the French Revolution, the plague and WWII (Jews were arrested and their houses burnt). However after all the destruction quite a few of the Colombages have survived. French word of the day ‘une maison a colombage’ = half timber house. Mainly built in the Middle Ages, they are a heavy timber framed house with masonry between the beams to act as a filler and stiffener. 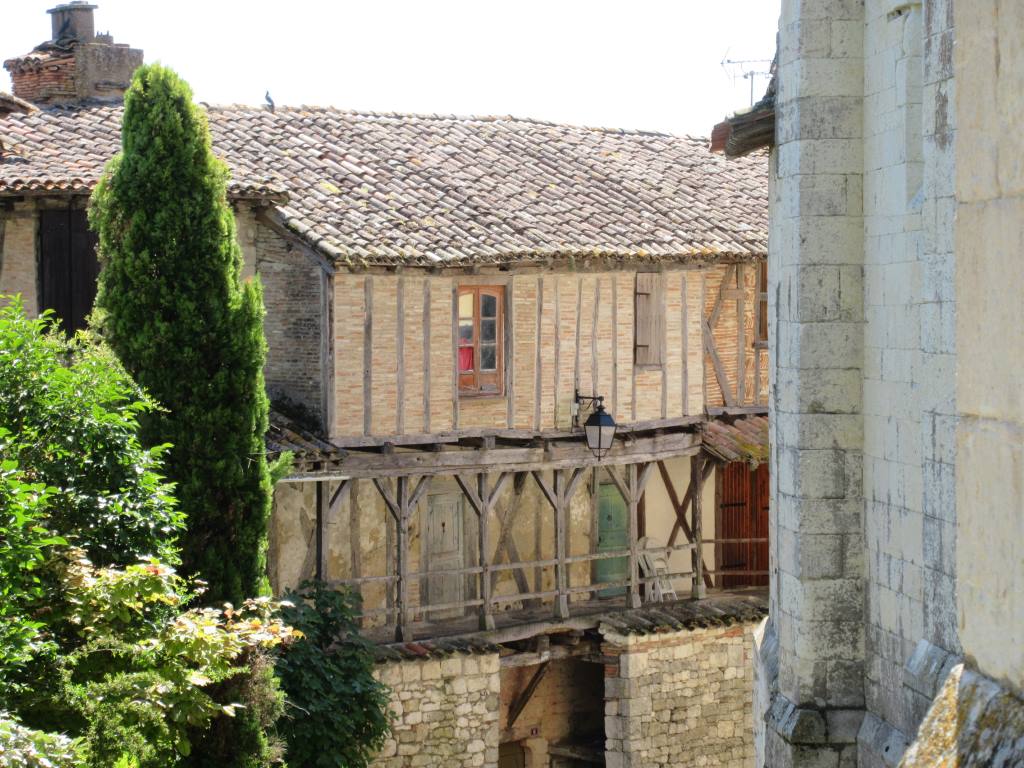 Montpezat de Quercy’s most popular tourist attraction is the Saint Martin Collegiate Church, which houses, behind the stalls, tapestries gifted to them in the 1500s. They have been recently restored in 2016 and hang behind plush red velvet curtains. You can electronically open the curtains and view the tapestries for 15 minutes before they close, at no charge. They tell the story of Saint Martin, a fourth century saint, who is apparently one of the most popular and recognised Saints across not only France but a number of countries throughout Europe. We weren’t sure if you were allowed to expose the tapestries to camera flash, so instead of being struck down by a higher being we pirated the tapestry photos below. 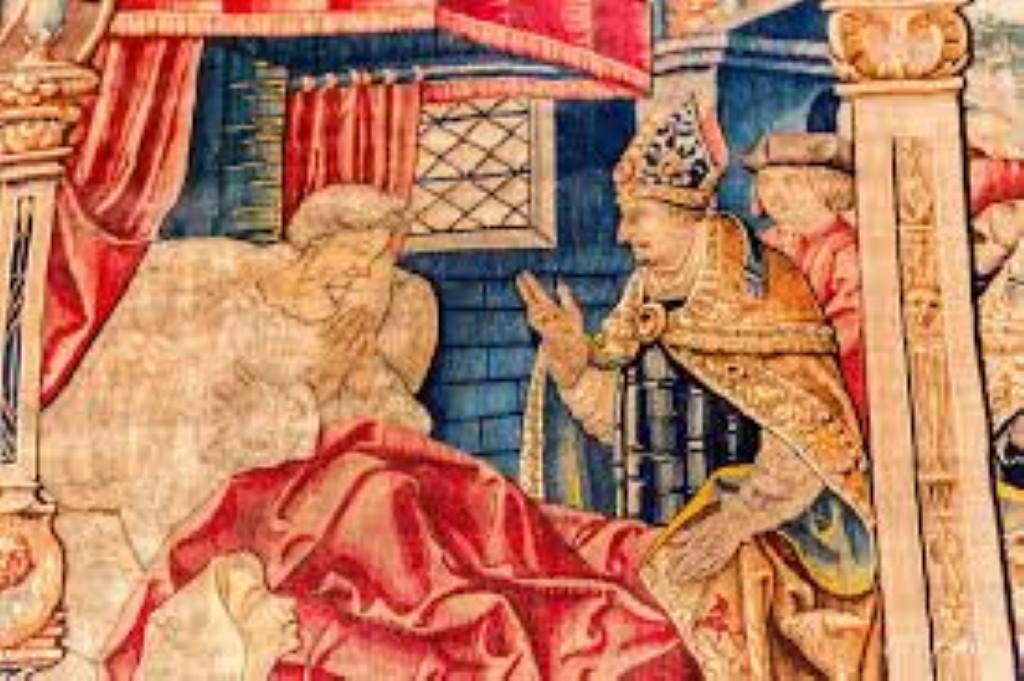 The church ground has a cool geocache which has a decoy cache. Having achieved four out of four caches we headed home to not only meet the electrician but to get out of the 34deg heat. Roger initially wrote on our blog that our mission was to live in France on a diet of baguette, cheese and wine; as proof of that here is a photo of our standard Taste of France. 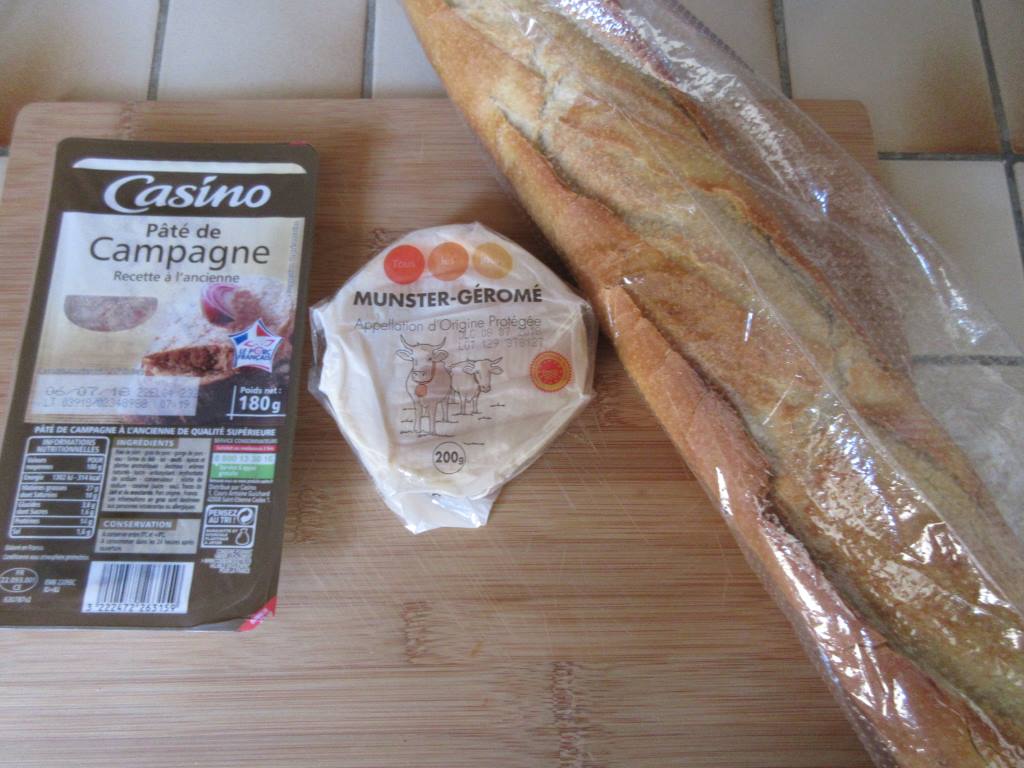 The power man finally came; he rambled on in French, banged and thumped things, dropped tools and parts on the soft lino, all the while standing on his plastic tool box. When his five-foot stature couldn’t reach he turned the tool box on its end and sucked his butt checks in. Power was restored, but unfortunately we don’t have air conditioning so we had to adjourn to the pub.

Because my favourite thing to see today was the Saint Martin Tapestries in the church; Cahors’ secret gardens follows on from the church theme and are No.3 and No.4. The Biblical garden is behind the Church of Saint Urcisse and has plants from the New and Old Testament e.g. figs, olives and the Lastie (he was an missionary) is in front of the church and just has flowers. 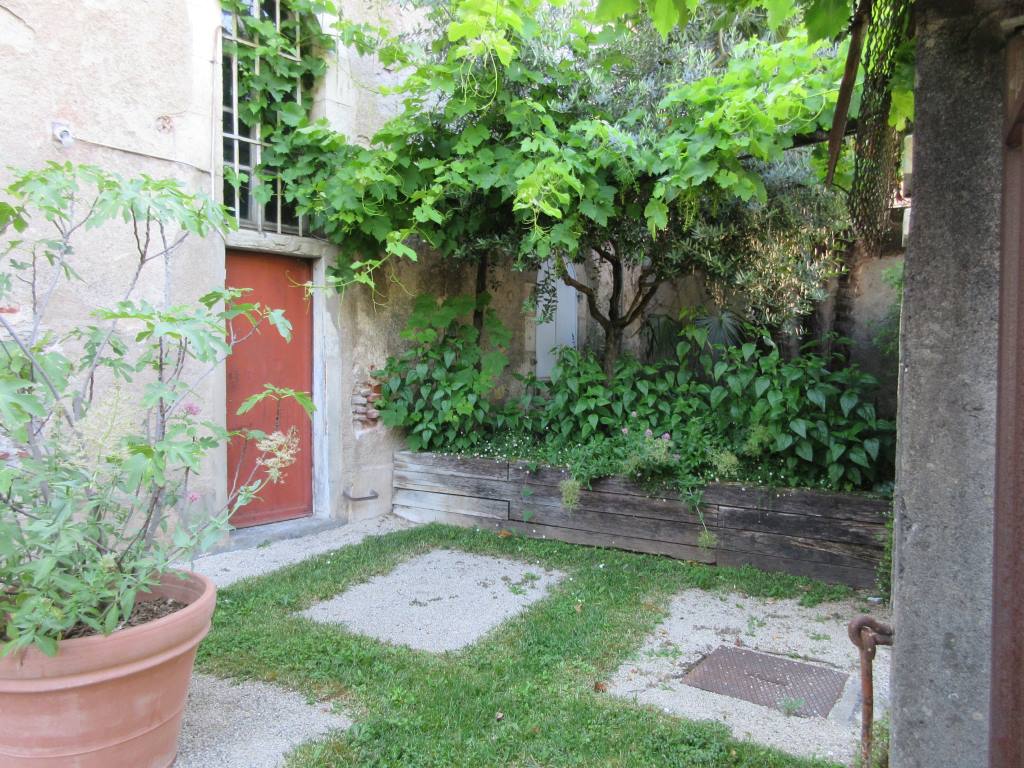 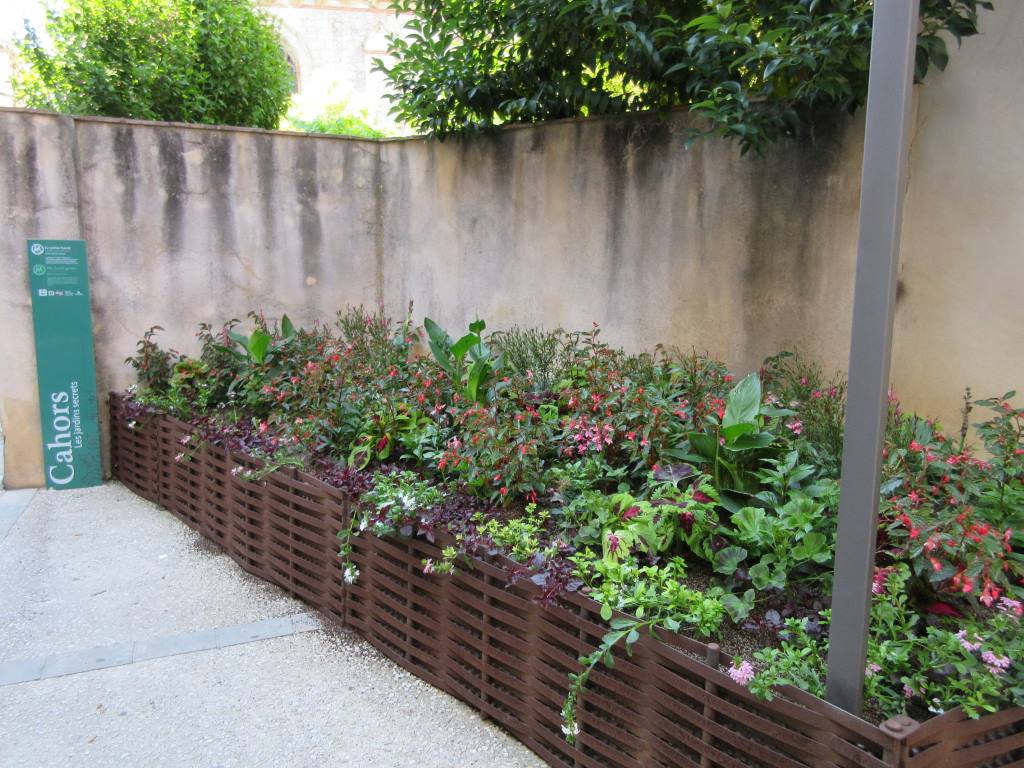