After a morning of research into how we will spend the next fortnight, we went off in search of a baguette. Sunday is not only a day of rest but a day of lunching and picnicking, therefore there are lots of people dining but not many shops open. Every bakery we went to was either closed or they had sold the last one. We eventually got one, at a premium price and happily munched our way through it for lunch. Today’s taste of France comes from the other thing I munched my way through and that is the punnet of cherries from the market yesterday. Although cheaper than NZ on a dollar for Euro basis, they were a little bit pre-season. 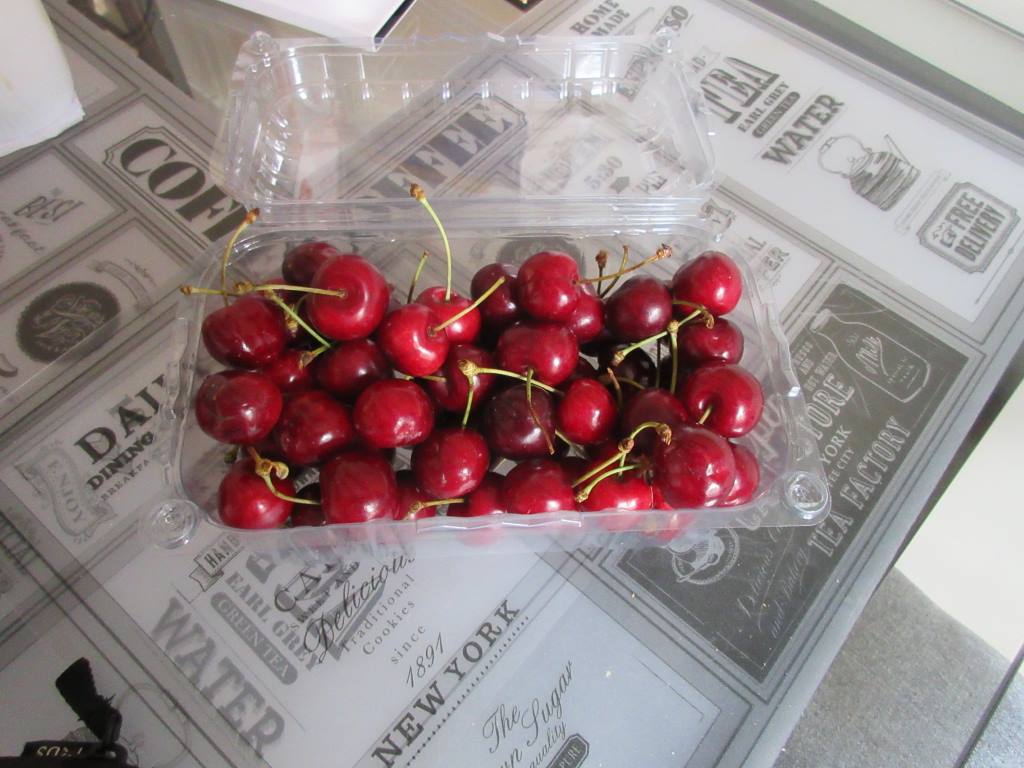 Last night we had another horrendous thunderstorm, however it didn’t affect us too much because the bedroom is basically in a basement and therefore the volume is softened by the half metre thick walls. The frequencies of thunderstorms at night after beautiful hot days intrigued me, so I read up on their occurrence. They occur mostly in the evening, in Spring and Summer, and come from a combination of moisture, unstable air and lift. The moisture is in the clouds, the unstable air is the warm air rising quickly and the lift is it going over the mountains. Other things generate lift but in our case the Midi-Pyrenees area is just a whole lot of hills, with trees; good for rain generation as well.

We went off to do some geocaching and discovered the damage done by last night’s thunderstorm. The first cache was on top of Mont St Cyr, which has fantastic views over Cahors. You can see from the photo below the hilly terrain and the Lot River which is continually brown from rain runoff. 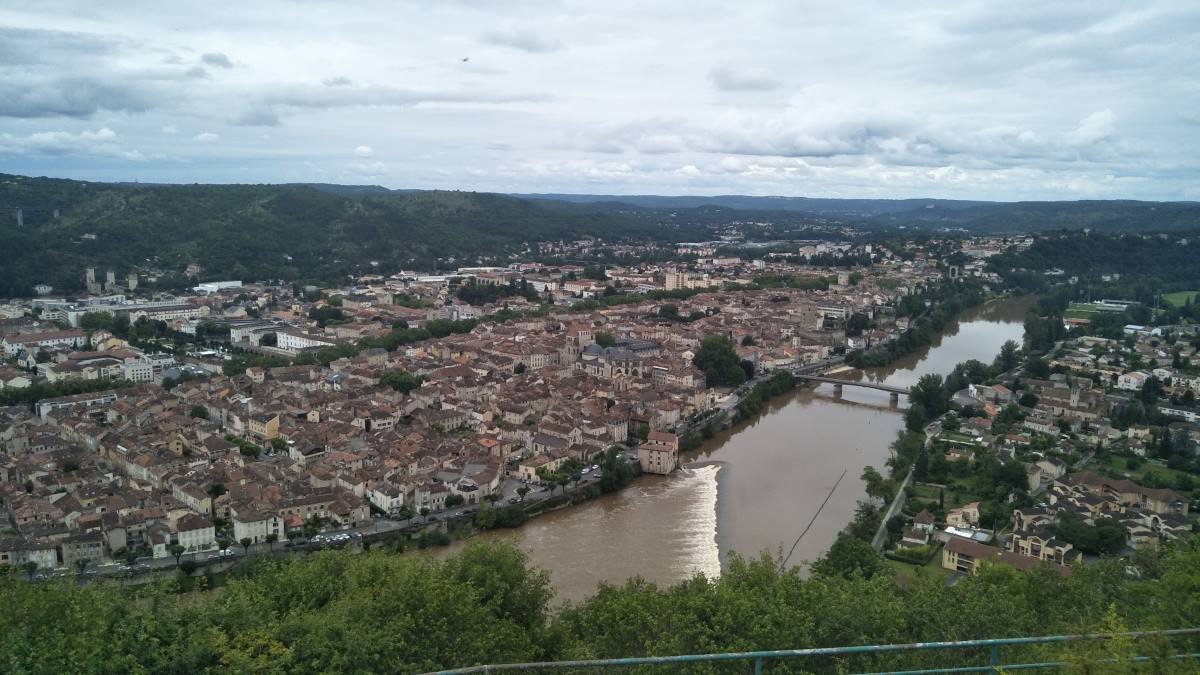 The second cache took us to a winery with chateau, the vines were damaged by the wind and rain, the ground was saturated and some baby birds had been thrown from their nest. The cache was hidden in a stone wall and the stones covering it had been washed away. 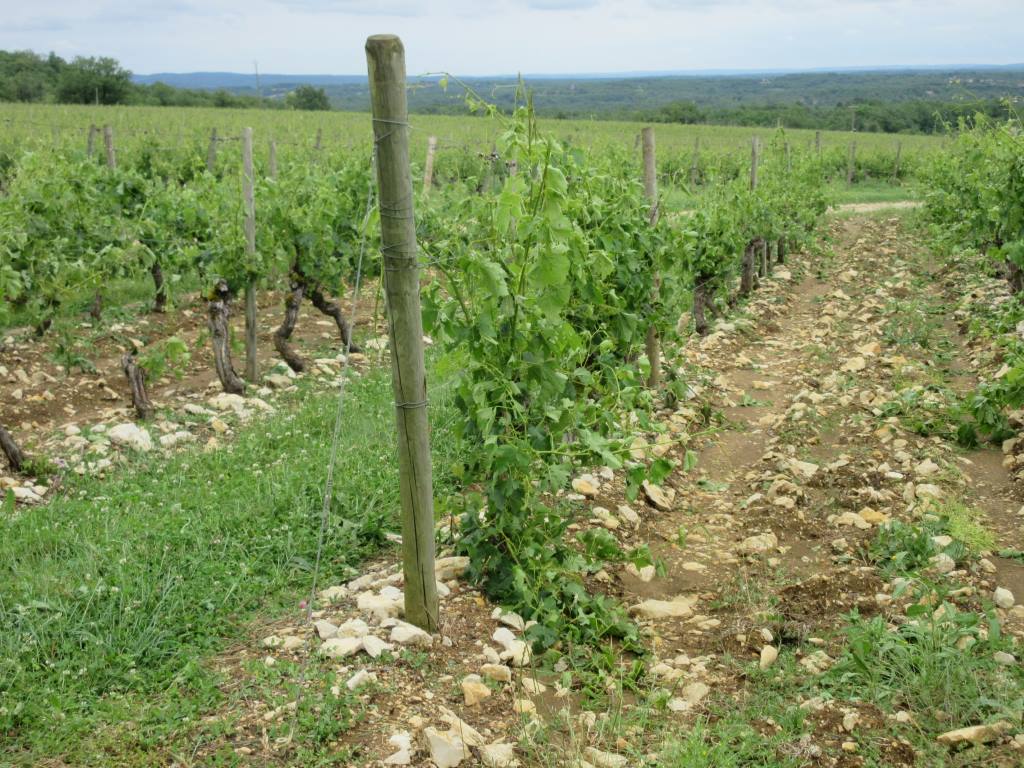 The third cache was at a Lavoir, it was in flood and the wall, that the cache was hidden in, had collapsed. All around this area, paddocks of wheat were in flood and water races were overflowing after a very short period of heavy rain. 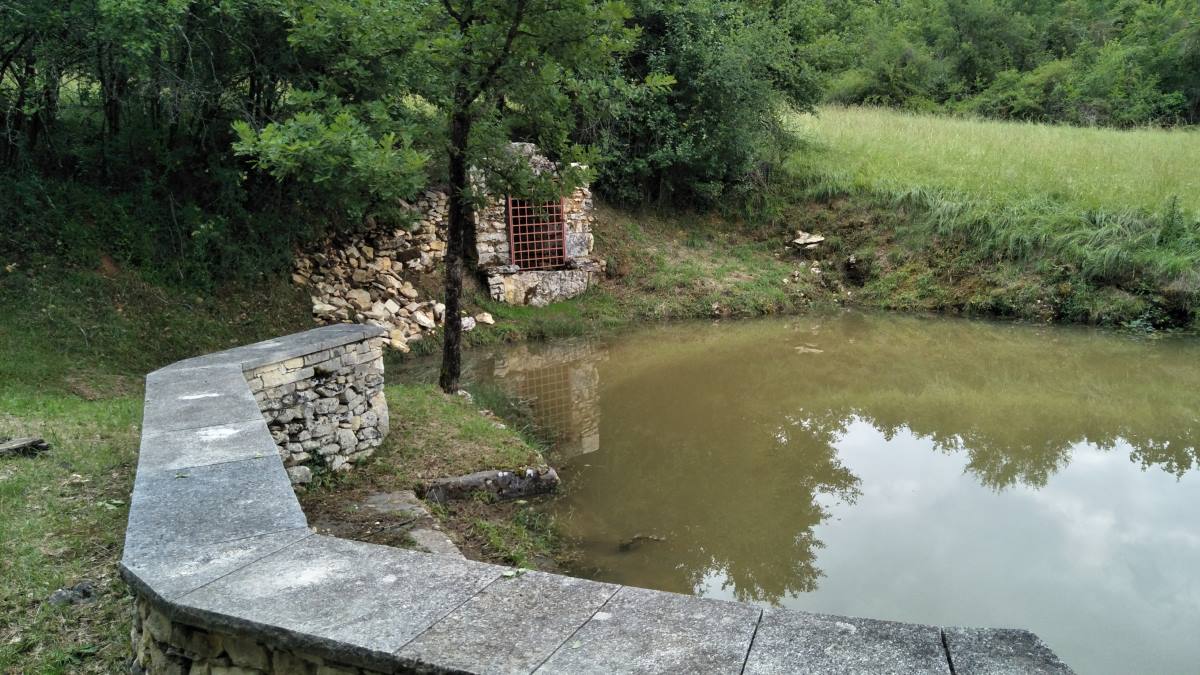 The fourth and last cache was at a Caselle, today’s French word, it is a cabin made of stone, similar to a Gariote but much bigger. The Gariote on one of our previous blogs could only house 1 person, whereas a Caselle could house 25 animals. The one in the photo was originally built in the 1850s; however its roof was redone in recent years for €20,000. Quite a costly bill, hence the sign over the door that tells geocaches to piss off, in a polite way. This cabin is on a walking path and bike trail but yet they blame the geocachers for wanton vandalism. 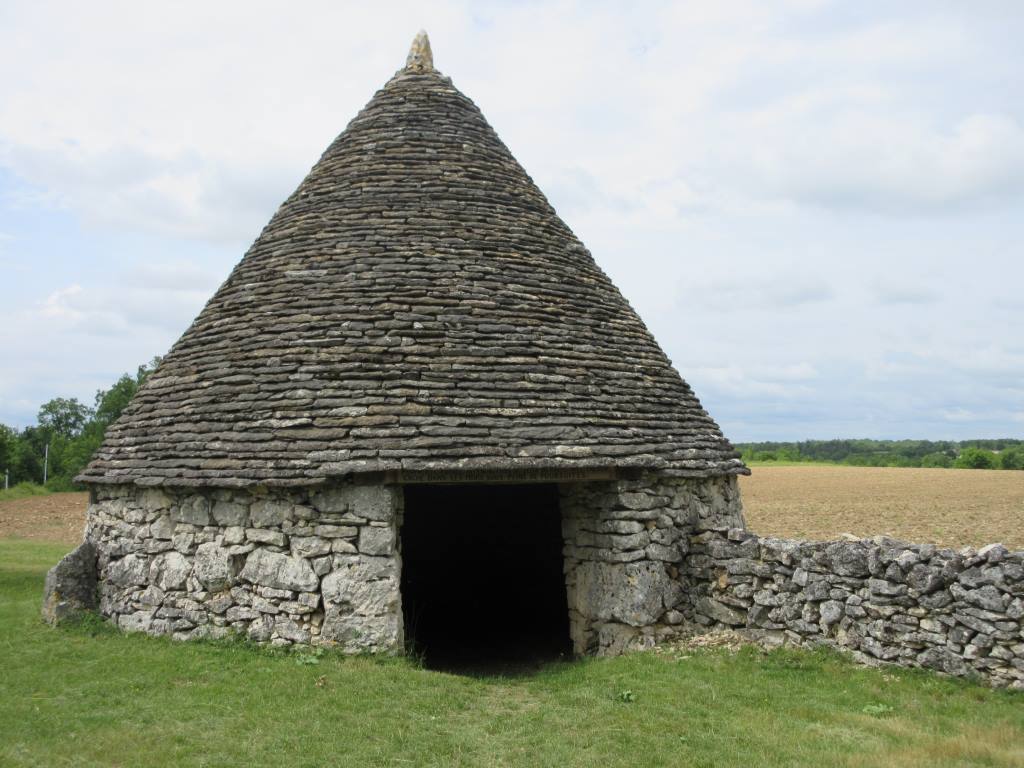 On the subject of the trekkers and pilgrims of the Saint Jacques trail, that don’t cause damage and obviously don’t do what bears do in the woods, today’s secret garden is No. 18, The Saint Jacques Garden. Cahors is on the Santiago de Compostela /Saint Jacques pilgrimage trail and recognises its significance and importance to past and present day pilgrims. Therefore they have a garden by the St Bart’s church with Saint Jacques features such as the gold shell and a pilgrim. 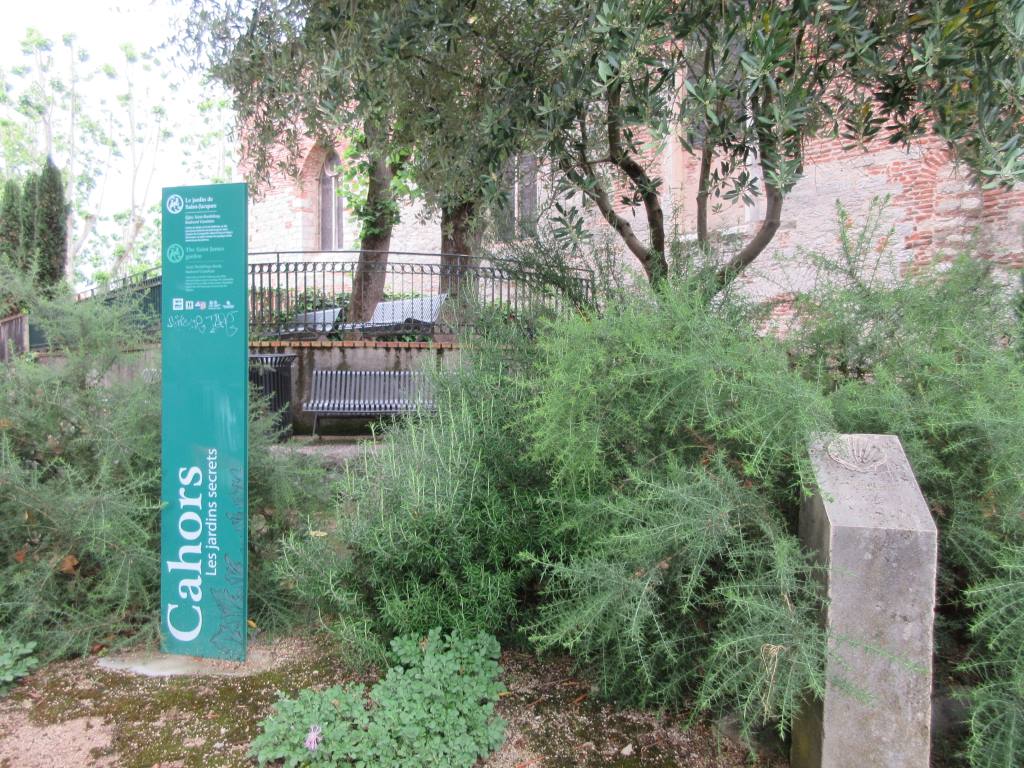 No more cat photos as we are so over the spraying boy cats and their constant fighting. (Ed - Just one more...) 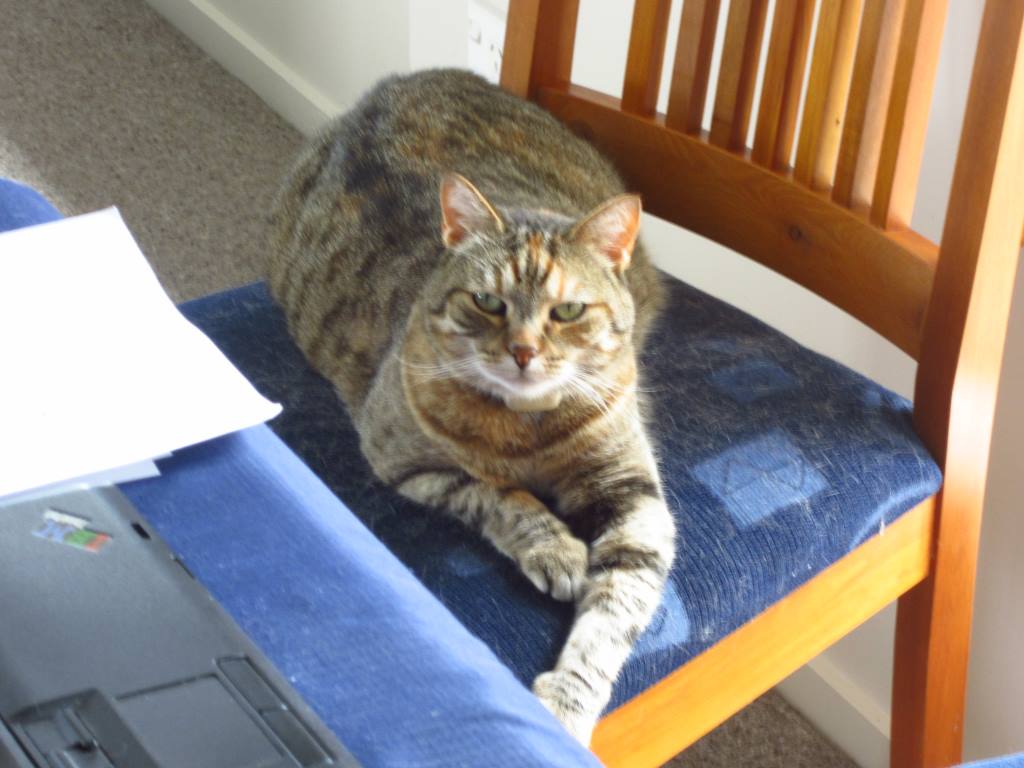