Today is all about : Cahors - plenty of Cultural Immersion Cahors style. The weekend is here and Cahors has so many activities organised for lovers of gardens, music and art. They have put on the fine weather with a high of 27c, however it felt hotter.

First Cultural Immersion was to attend the Saturday farmers market. This market was bigger and better than Wednesday’s as there were more stalls and they opened up the Halles. French word of the day, Halle or Salle mean the same thing, they are halls. In the medieval days they had covered halls with open sides for the town to meet, have market days or festivals. Most French towns have preserved the medieval halls and hold fêtes under them. Bigger towns have erected enclosed market halls which are similar to the Queen Vic market in Melbourne but on a much smaller scale. Our taste of France came from the market today, Chanterelle Girolle or trumpet mushrooms to us. They hold a lot of moisture so to cook them you dry fry the moisture out, stir in some butter and garlic and toss them through some pasta. Cook substituted the garlic for chilli, see below. You don’t wash them because of the moisture and therefore you either scrap or brush off the earth. 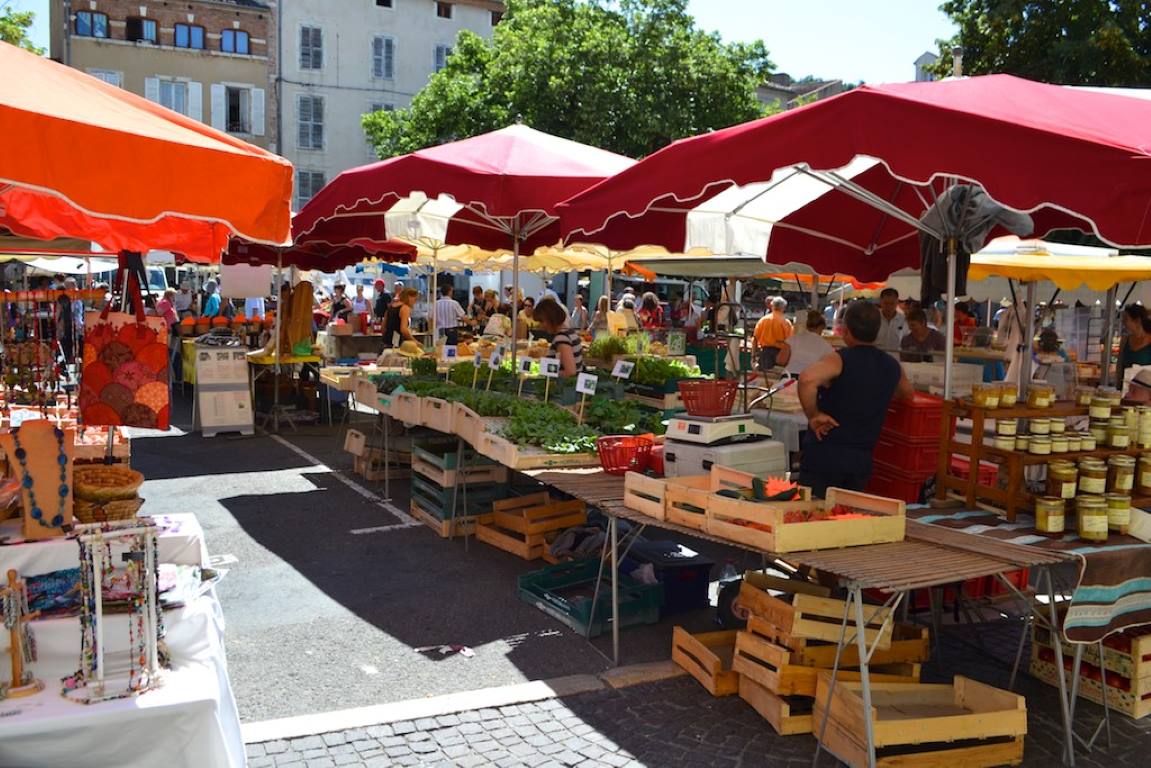 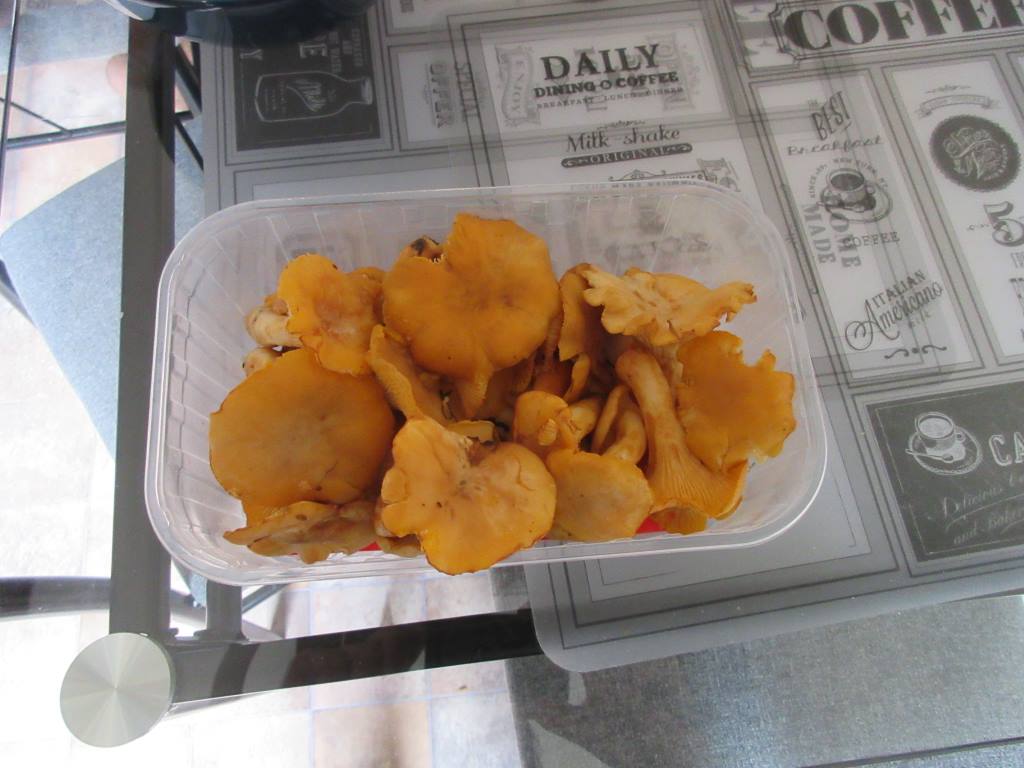 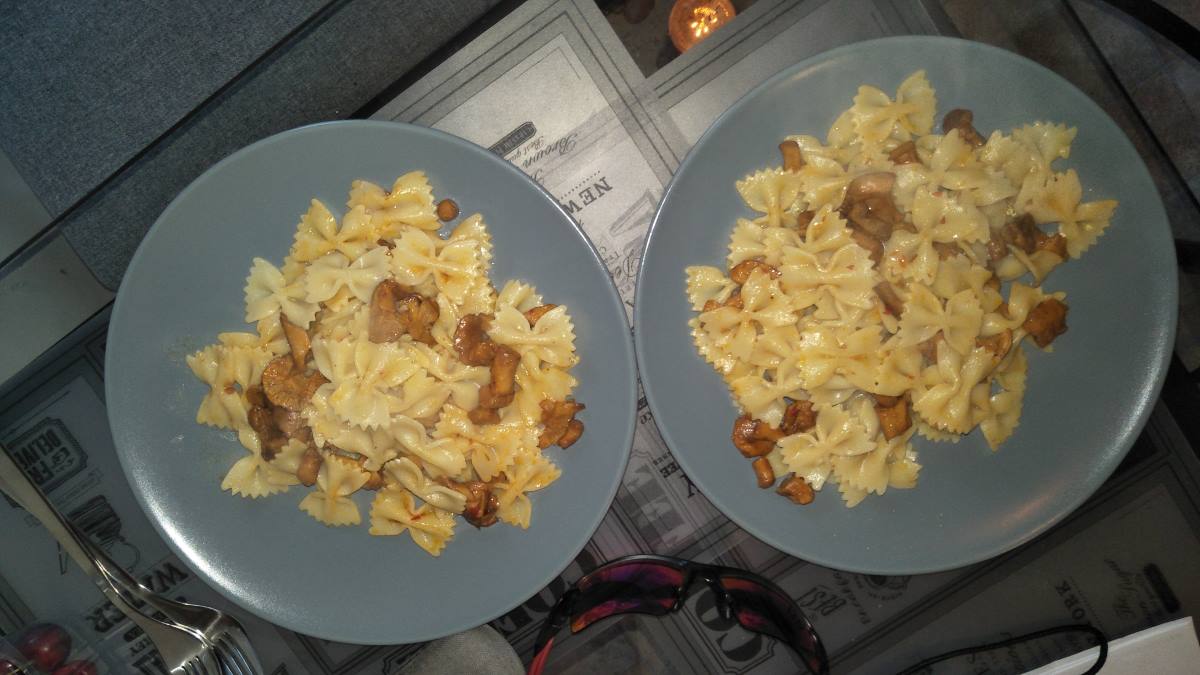 Our second Cultural Immersion was to attend the open air music afternoon in the park sponsored by Poule aux Potes (a local bar that translates to Hen and mates). The local game and toy shop provided board games for children to play; the pub provided a bar and the council a park near a playground. There was plenty of tree shade, food to purchase, even though they did say to bring a shared lunch and there was a great atmosphere (and relaxing smoke). We arrived at 1.00pm to hear teenage music and stayed to listen to the lady who played earlier at the market. She uses a double bass and a beat box mixer to play music that caters for everybody, which included English songs like “Fever” sung by Peggy Lee, among others. 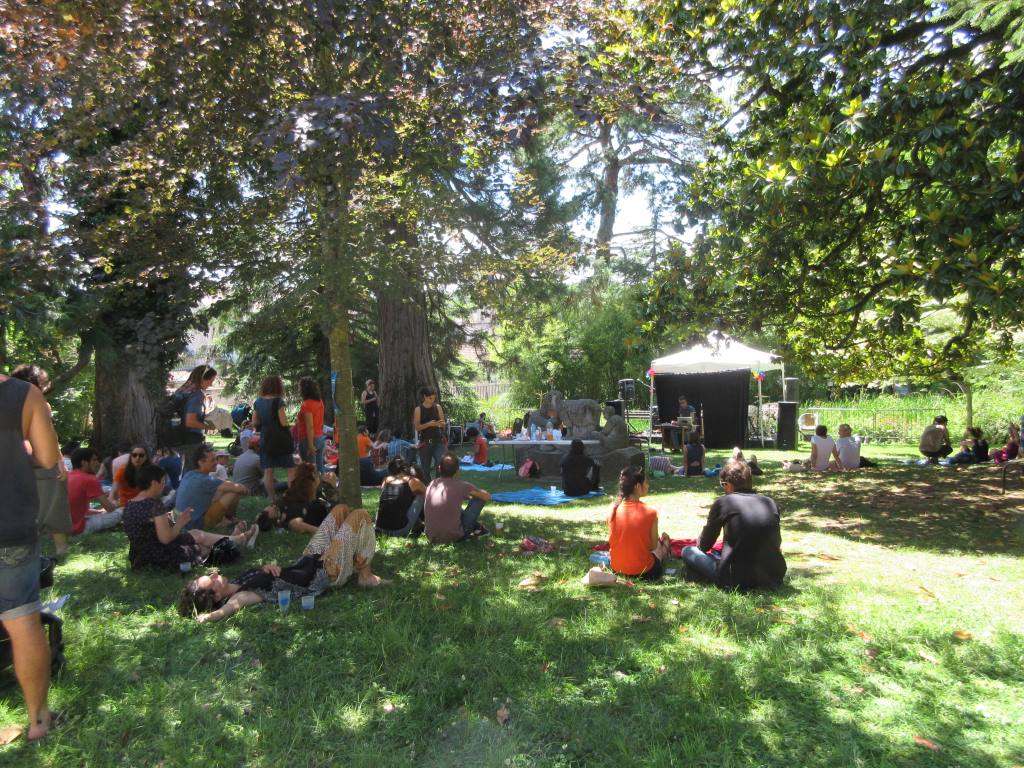 We left the park to further discover Cahors on foot and take in another geocache. This cache was at the remains of the rampart and guard towers that were built in the 14th century to protect the town from the threat of the Hundred Year’s war. The wall stretched for 800 metres to block the isthmus of the peninsula. It has been rebuilt in places, but is now mostly hidden away by the construction of houses, roads and the railway. 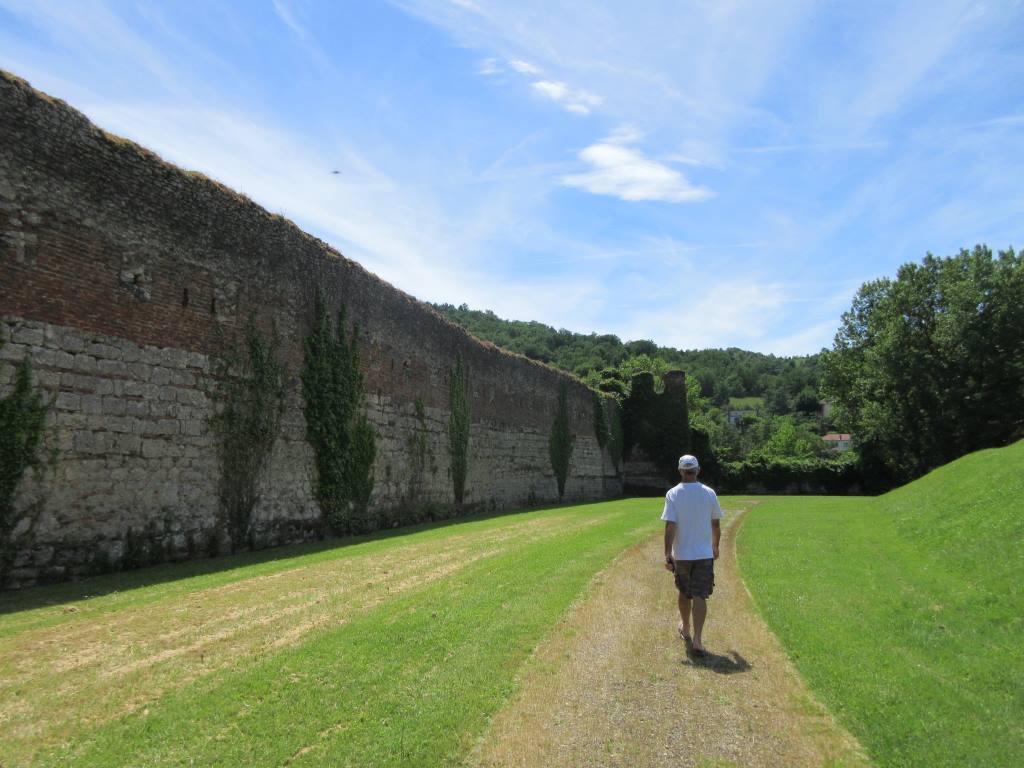 As the walk to cache was extremely long especially in the heat we went home and rested before our next expedition. Cultural Immersion three was to revisit the park as the family friendly concert went until 7.30pm. This time there was a band playing, in French, using instruments such as a piano accordion, a clarinet, trumpet and violin. They cover a range of music genre from folk to heavy metal; who would believe a piano accordion could produce AC/DC classics. Once that concert finished we went to the next one which started in the square at 7.00pm. Again it was a bit young-personish, so we moved on. 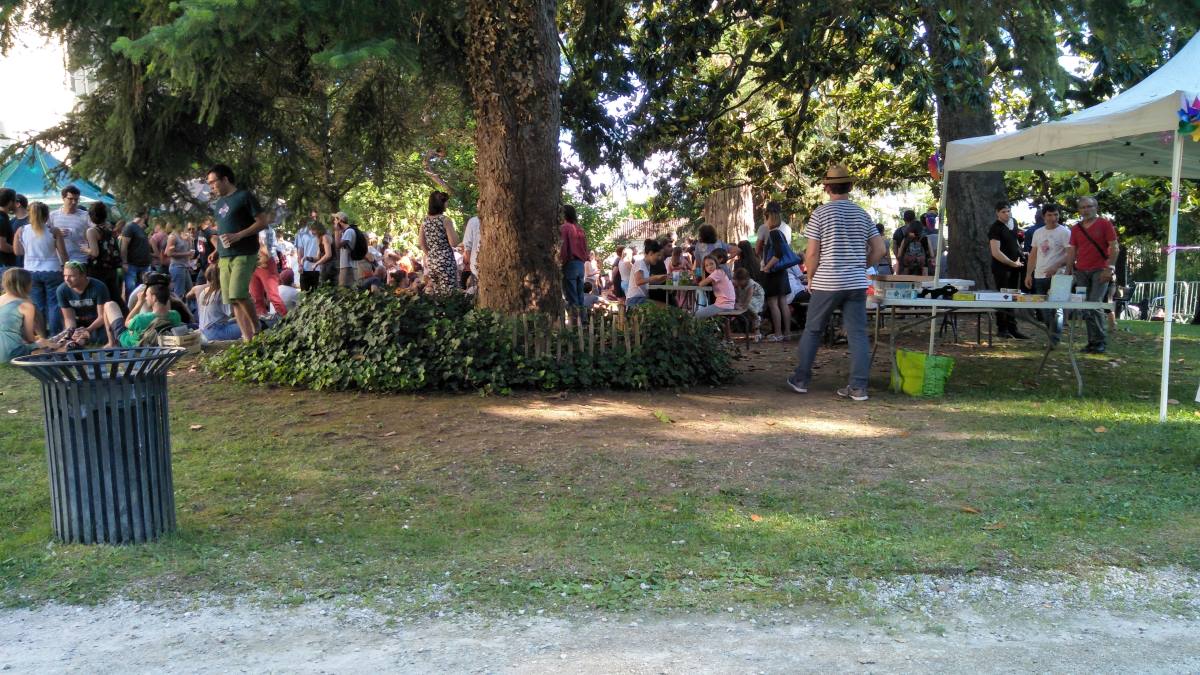 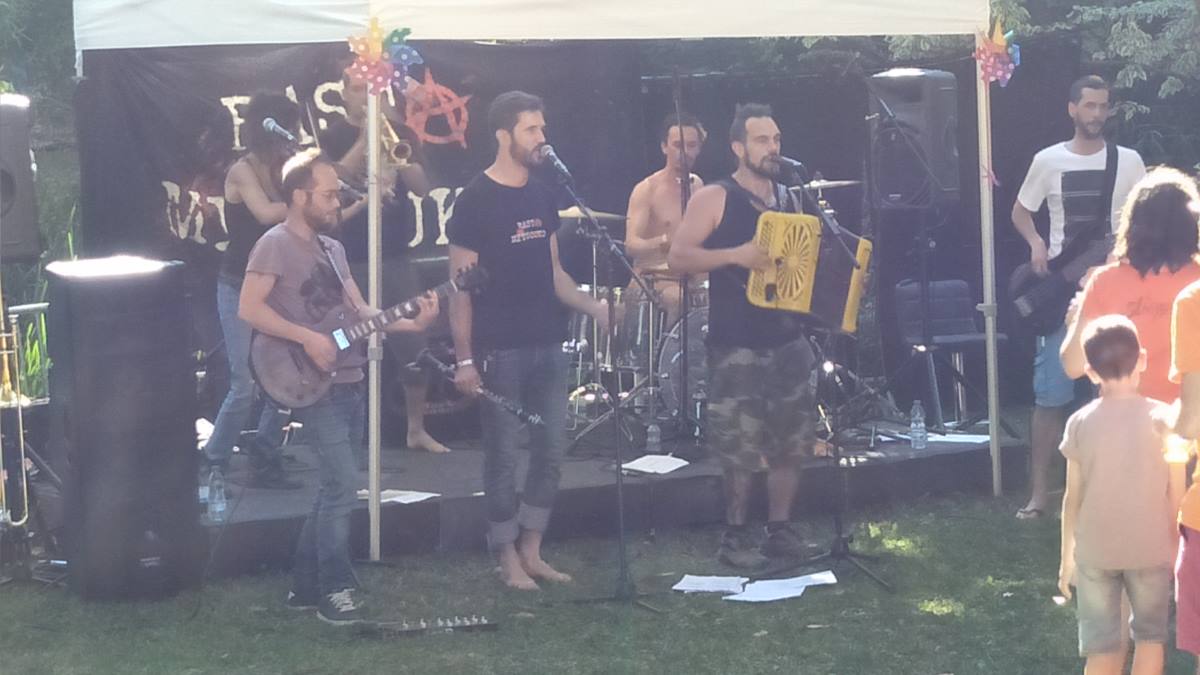 When we went to the park concert the first time a chap was starting to graffiti some boards, when we returned he had almost finished. These photos are from both visits. 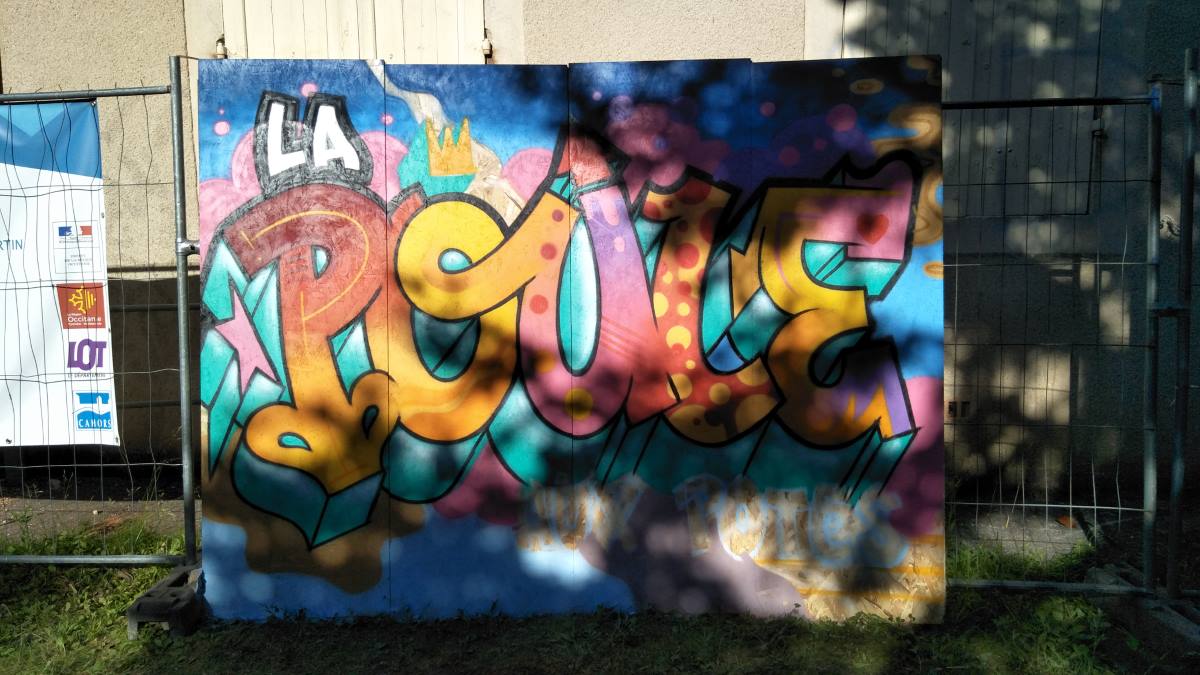 The flower festival activities this weekend actually involve driving to other towns and seeing people’s private gardens. It is way too hot for that sort of Cultural Immersion so we viewed another Cahors’ secret garden. No.6 is Spice Square; the garden is situated near a herbal shop and the dogs drinking fountain. The spouts of the fountain are dog’s heads and the plants in the garden are spices, strangely enough. 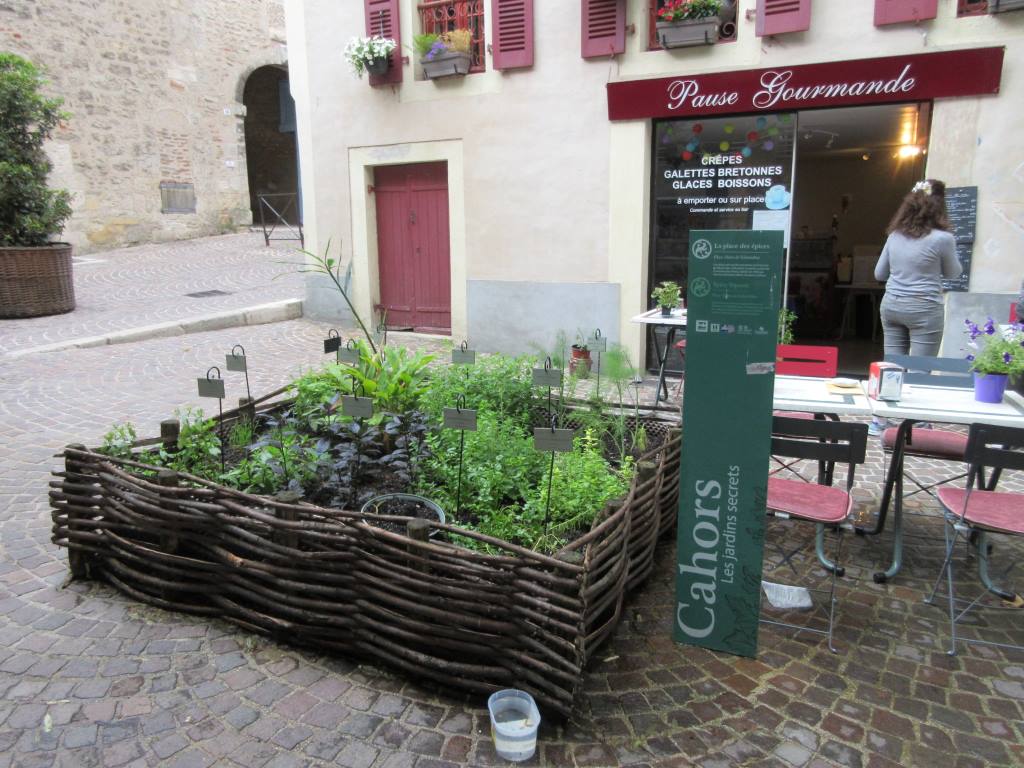 Last photo for the day is a rare visitor to the garden; this cat has the same markings and colouring as the famed “grumpy cat” 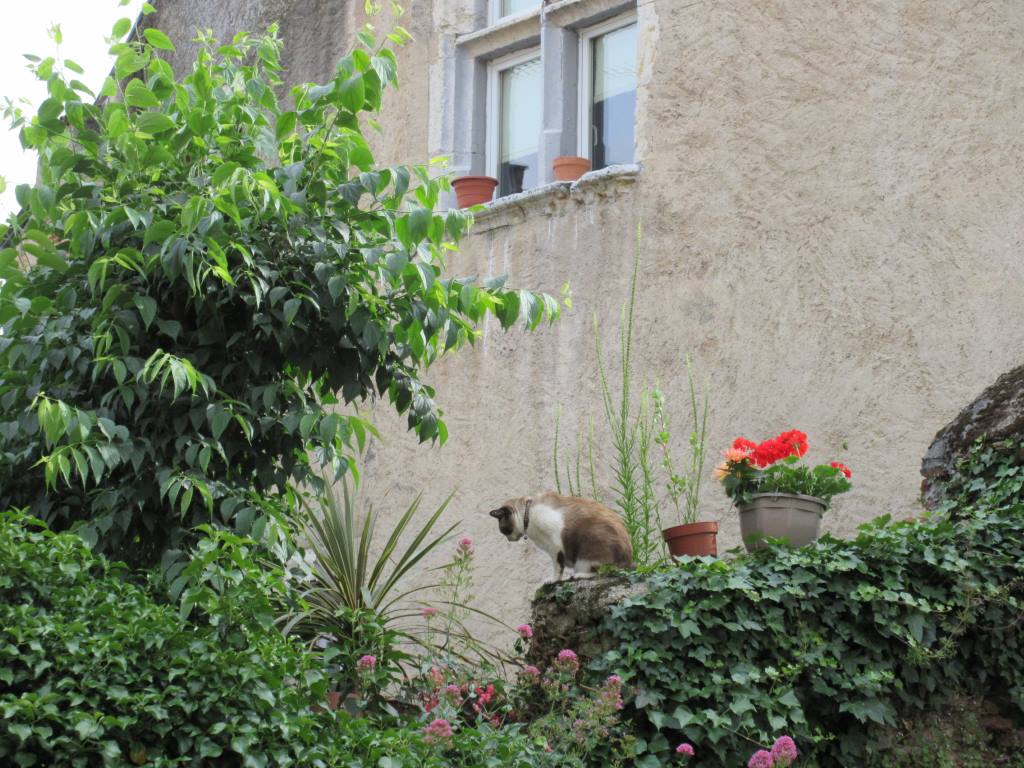